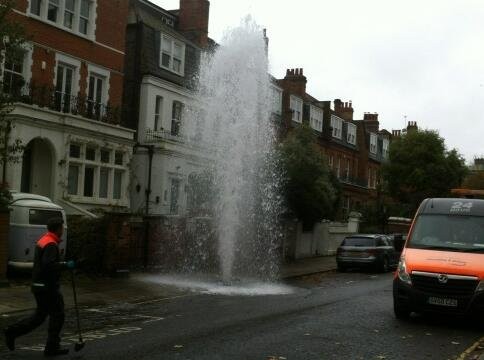 A fire on Friday night damaged a West End Lane property, but no-one was hurt.

A standpipe blew in Fairhazel Gardens, causing a spectacular fountain.

We looked back at Doris Lessing’s incorporation of West Hampstead into her writing, and the moment she was told of her Nobel Prize, outside her house.

The Jubilee Line is one of five tube lines that will run 24hrs on Friday and Saturday nights from 2015. TfL also confirmed that all ticket offices will close across the network, although stations will be staffed at the ticket barriers.

A thief made off with the collection box in West End Lane Books. The staff had been raising money for Epilepsy Action.

Police are appealing for witnesses after an attack on Tuesday evening at about 6.30pm around the stations. Call 101 if you can help.

A new antenatal class is starting at JW3 [sponsored]

Local historians Dick Weindling and Marianne Colloms gave an excellent talk at West End Lane Books about the history of Decca Studios and Klooks Kleek club, and also published the second part of their piece on local musicians.

WhampWalks took the 328 bus to Chelsea and walked to Richmond to get the Overground back home. It’s a lovely 12 mile walk with lots to see.

How many times have you spotted West Hampstead and Kilburn in films and TV programmes?

One of Paramount’s West Hampstead bags has made it to Antarctica.

Blue is the Warmest Colour is NxNW6’s Film of the Week. It’s also the next NW6 Film Club film on December 8th at JW3.

The craft/vintage market on Sundays outside Thameslink has changed its hours to 11-3.

The first residential Christmas tree is up! Those of you waiting a couple more weeks can get yours from the Mill Lane Garden Centre from next Saturday.

The Winch is looking for parents, carers and social enterprises who want to start projects focused on helping children aged 0-5.

This Thursday evening, Virginia Berridge, chair of WHAT, will be talking about her new book… not a history of local planning, but something from her professional life – a history of the changing perceptions of drugs.

Citizens of #Whamp: you astonish us with yr fabulousness. Man: ‘I don’t want to buy book I want to give money to replace stolen charity box’
— West End Lane Books (@WELBooks) November 22, 2013