What happened between the all the spectacular sunrises and sunsets in West Hampstead in 2013?

January
Local MP Glenda Jackson formally announced she wouldn’t stand for re-election in 2015. Catch up on all the political stirrings of the year. 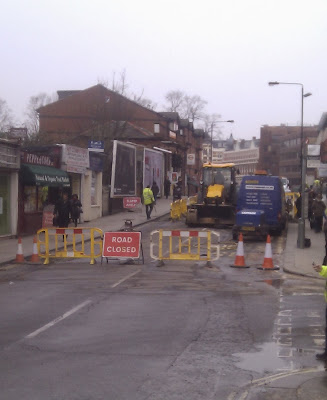 A big burst water main closed West End Lane for a week. it was the worst of the many many water problems in the area – including three in that same week.

Thames Water failed to offer a solution. It wasn’t until July that we heard from Thames Water that there’s a very long-term plan for replacing the pipes. Half of the remaining old pipes will be replaced between 2015 and 2020, the other half between 2020 and 2025. In reality, one imagines they’ll largely be replaced as and when they fail over the next few years.

March
A man shot himself in the foot in the Golden Egg pub on Kilburn High Road. The pub never seemed to recover and in September it reopened under new owners as The Earl Derby.

April
A local binman stopped a potentially bad accident when he moved his lorry to block a runaway post office van.

May
If you’ve never been to the (gents) toilet by West End Green, someone took a video so you can see what you’ve been, er, missing.

June
The Black Lion in Kilburn turned off its beer taps in protest at its brewery owners beer pricing. It was a good publicity stunt, but has it hurt the pub’s trade?

Kirstie Allsopp made waves while she was filming in West Hampstead this week, with a call for Hillfield Road residents to tidy up their street. One local saw my tweet of the news that Kirstie & Phil were coming to West Hampstead, followed up with the Location Location Location team, and promptly sold his house via the programme.

July
The mystery of the cucumbers dominated silly season this summer. The national press finally picked the story up (although confused West Hampstead with Hampstead). In fact the story refused to die – and meant a quick appearance by me on the BBC London breakfast radio show.

@whampstead Is this anybody's cucumber left by my flat? pic.twitter.com/PmRsRvfhOh

Mark Carney, installed as governor of the Bank of England, chose to live in West Hampstead prompting much speculation as to whereabouts he might spend his ample housing allowance. He’s since been spotted in The Wet Fish Cafe and Mill Lane Barbers.

Some residents in Fordwych Road have started guerilla gardening.

TfL confirmed that the Overground station will be redeveloped next year (this should include lifts).

We looked at all the schnitzels in the area – but which did we think was best?

Sad news that the body of Richard Gent, who went missing more than a year ago from West Hampstead was found near Cricklewood. A scholarship has been set up in his name.

Everyone got their green wheelie bins delivered, which meant residents no longer had to separate their recycling.

Teething problems with the new rubbish collections became major headaches when Veolia’s teams struggled to adjust and the area became a dumping ground. Camden was forced to launch a special campaign, which seems to have had a positive impact in its first few weeks. If you want to know what happens to all our recycling, I went to the Lea Valley to find out.

August
Lymington Road based Hampstead Cricket Club 1st XI won its league for the first time ever. The 3rd, 4ths and Ladies team also all won their leagues.

Waitrose subtly announced its intention to move into the Pizza Express site. Check out the full round-up of shops and restaurants news.

It was 50 years since David Bowie’s first professional recording, which took place at Decca Studios in West Hampstead.

There was a tragic incident on Kilburn High Road, when two women were shot, one fatally, outside Woody’s Grill in the early hours in what appears to have been a case of being in the wrong place at the wrong time. Eight men have been arrrested in connection with the murders, with two in custody awaiting a full trial.

In other crime news: A German teenager pleaded guilty to the manslaughter of Douglas Hutchison, aka Professor Whitestick, in West Hampstead last year. He has been detained in Broadmoor indefinitely and is likely to be extradited to Germany where he is wanted in connection with a murder there.

There was an explosion of blue graffitti in and around Maygrove Road, which kept reappearing all over the area for a few months.

September
JW3 opened on Finchley Road with much fanfare. The reaction off the smaller London Jewish Cultural Centre in Golders Green has not been widely reported.

The new Emmanuel school building opened – many locals object to its use of grey rather than red brick, but it’s up for a Camden architecture award.

Sales began for West Hampstead Square. All the development news of the year is here.

WHAT celebrated its 40th anniversary.

October
A bench, of all things, proved controversial.

The St Jude storm left West Hampstead relatively unscathed, though there were a few trees down and some minor damage. 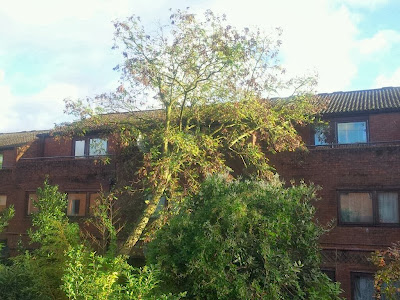 It turned out it was cheaper to rent in Barcelona and commute to London than rent in West Hampstead. All the property news of the year is here.

November
There was a spectacular fire on West End Lane that did minimal damage and a spectacular fountain on Fairhazel Gardens that was the result of a repair gone wrong.

Long-time local resident and Nobel Prize winner Doris Lessing died. She was 94. Here she is being told she’s won the Nobel Prize in 2007 outside her West Hampstead home (I love that an artichoke figures prominently). West Hampstead wasn’t just her home, it also featured in her writing.

December
Camden introduced a 20mph limit on all its roads (this excludes TfL roads in the borough, such as Finchley Road)

The King of Kilburn met the Queen of the United Kingdom as Bradley Wiggins received his knighthood at the palace. 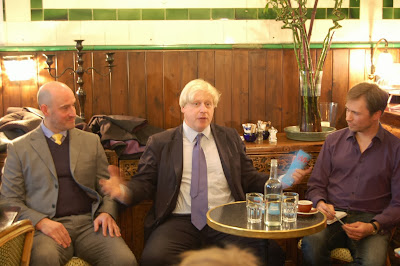 Stats of the year

Did our property pundit get it right?