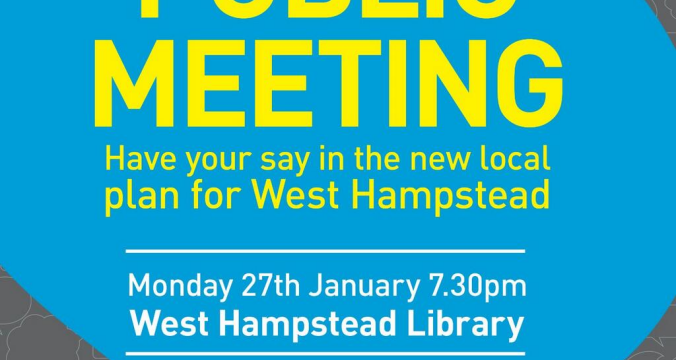 The West Hampstead Neighbourhood Development Plan is almost ready (it’s only the second such plan in London to reach this stage). The final draft is out for consultation now (i.e., the team wants your comments), then there’ll be a final revision before it goes first to Camden council for approval and then to a referendum later in the year.

If you want to read the whole draft, you can – it’s available here [pdf]. What I thought would be useful however, would be to look just at its six objectives and add a little bit of context.

The draft is ambitious in scope – perhaps too ambitious. Alongside the objectives are 17 policies and various recommendations. At times, the latter can read more like a wishlist than a planning document. These are the sections that might struggle to deliver as they lack any statutory teeth. The plan is most robust on how developments should be considered, both within and beyond the “growth area” around the stations. The plan sets out policies for development of the area between 2014 and 2031.

There’s also a public meeting next Monday, January 27th where the draft will be discussed and this would be a good opportunity to have your say and give feedback. It’s more or less your last chance before simply voting yes or no in the referendum. The deadline for feedback is February 28th. 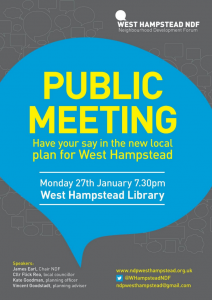 “Development in Fortune Green and West Hampstead will allow for a mixed, vibrant and successful local community. The Area has a distinct and widely appreciated village character with a variety of amenities and excellent transport links. This Plan seeks to retain and protect these positive features, while allowing for new housing, new jobs and sustainable growth in the years ahead.”

Yes, that “village feel” crops up again. Some mock it, some believe in it. It depends a bit where you live and how much you engage with the area. No-one’s pretending that West Hampstead is Ambridge, but there is a sense that the winding West End Lane and the friendly atmosphere does lend something of a village feel to the area, especially with West End Green at the end.

@WHampstead I grew up in a village. West Hampstead does not feel like a village. I’m not related to any of my neighbours for a start…

Was telling husband how lovely it was at #WestHampstead #FarmersMarket.Him: ‘You think you’re in #Ambridge don’t you?’ #GuiltyAsCharged — West End Lane Books (@WELBooks) December 7, 2013 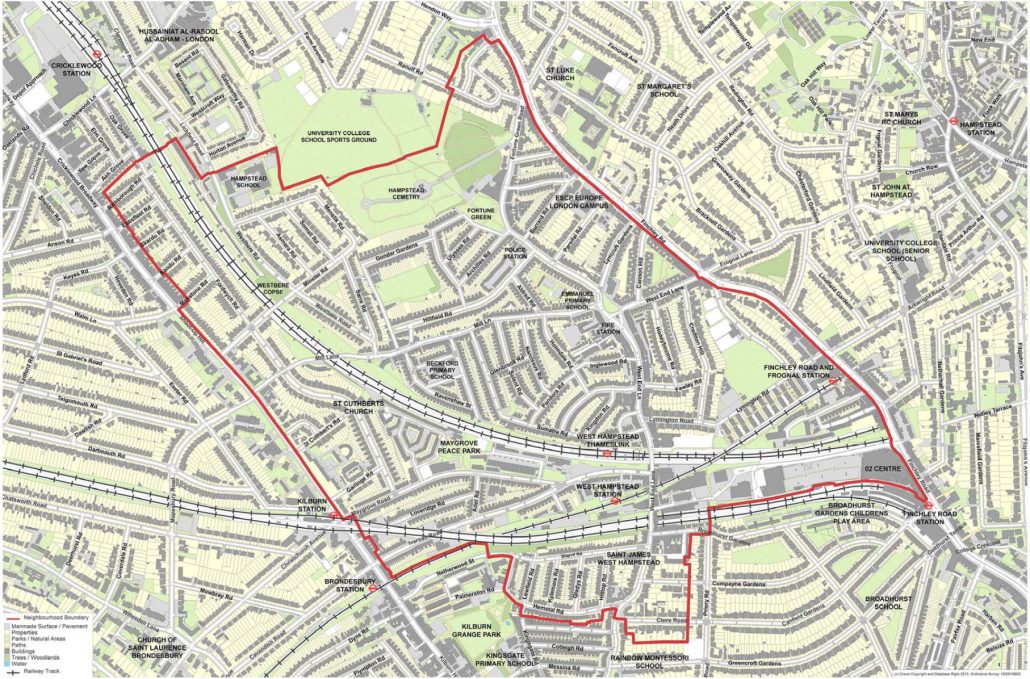 The plan cannot, legally, be anti-development, so its role is to help shape development. The idea is that these plans -and there are many springing up around the country – form part of planning policy for the council. They should mean that locals can exercise more power. This has yet to be tested as none are fully operational yet.

1. Housing – “Development in Fortune Green & West Hampstead will provide a range of housing and housing types, including social and affordable housing, as well as housing suitable for families, old people and young people. The West Hampstead Growth Area will be the focus for new development and will provide new housing and accompanying additional infrastructure. Development outside the Growth Area will be on a smaller scale.”

Editor’s comment: fairly straightforward, though note that this seeks to concentrate the vast majority of development to the south of the area rather than making any suggestion of spreading the burden. This is partly because there’s more land available there, and the plan must dovetail with the London Plan, which has already identified that as the growth area.

2. Design & Character – “Development will be of high-quality design and will need to fit in with the existing styles of the Area, large parts of which are covered by Conservation Areas. The height of new buildings shall fit in with the rooflines of existing buildings in their immediate vicinity. In all development there shall be a presumption in favour of preserving the distinct character and appearance of the Area, as well as the views across it.”

Editor’s comment: The issue of building height has always been contentious, with some residents wanting an absolute height limit imposed, others being more relaxed about it, and planners warning that such limits would be virtually impossible to enforce in practice. Therefore more reference is made to relative rooflines. Although the plan is not explicitly against modern architecture, the wording of the objective would suggest it is unlikely to be encouraged in many areas. It would be a shame if this precluded some more interesting designs being brought forward.

3. Transport – “Development will enhance the provision of public transport in the Area. West Hampstead’s three rail stations, and the areas around them, shall be the focus of improvements. Making better provision for pedestrian and cyclist movement through the Area – particularly around the West Hampstead Interchange – is a key priority.”

Editor’s comment: It’s interesting that the plan suggests active improvements to transport, which is typically considered a strength of the area. Today’s strength does risk becoming tomorrow’s weakness in the sense that the rapid population growth precisely around the stations could lead to quite severe pedestrian (and thus traffic) congestion. It’s good to see robust policies in this area.

Editor’s comment: Some of these areas (schools) are contentious, others (health centres), slightly less so. The plan recognises the changing nature of the way the NHS is both delivered and used, which means that traditional equations of people per GP may no longer be relevant. Schooling for both primary and secondary ages has been a hot topic and there is a plan policy for a new secondary school in the area by 2031 to accommodate demand. Overall though, this objective and related policies are “keep what we’ve got and give us more”.

5. Economy – “Development will promote and support a successful local economy, with thriving town and neighbourhood centres. Development shall protect and support existing jobs and employment sites – as well as providing new jobs and attracting new businesses to the Area. Such development shall also provide flexible space, particularly for small and micro-businesses.”

Editor’s comment: This is a particularly interesting topic given the differences between the various commercial zones covered by the plan and the heavy focus on housing over employment in the London Plan. To quote at length from paragraph F2 of the draft:

The Camden Core Strategy (Policy CS8) seeks to promote a successful and inclusive economy in the borough. It aims to “safeguard existing employment sites” and provide “a mix of employment facilities and types”. It also highlights the fact that Camden has a large proportion of small businesses, 75% of which employ less than five people. However, it notes (8.20) “there is a lack of high quality premises suitable for small business, particularly those less than 100 sq m”. It adds: “we will seek the provision of innovative new employment floor space in developments that will provide a range of facilities including: flexible occupancy terms, flexible layouts, studios, workshops, networking, socialising and meeting space that will meet the needs of a range of business types and sizes”. The West Hampstead Place Plan says “a mix of employment space is important to the local economy and employment opportunities” and there is “a desire for small businesses to be able to stay in the area” and a need to “develop space…affordable to their needs”. This Plan expresses concern that commercial sites in Area are being replaced with residential developments, causing damage to the local economy, reducing employment opportunities and restricting economic growth. The provision of new jobs in the Area is important to local community, the local service sector and existing businesses; it is important that the Area does not become a “commuter town” for those working in central London and the City.

The NDP’s policies match these, as they should, and it’s hoped that this gives the communit more ammunition when dealing with developers and the council itself when it comes to preserving a mixed economy. There seems to be a misguided belief that the area’s high number of freelancers/homeworkers can single-handedly keep the daytime economy alive. Almost every West Hampstead trader will tell you that simply isn’t the case. The area needs daytime workers not just daytime residents.

Editor’s comment: It’s hard to find anyone who argues that the minimal green space in West Hampstead shouldn’t at least be preserved, and preferably extended. The NDP is encouraging green spaces and corridors that can work within an urban context; again it’s up to planners and developers to deliver. 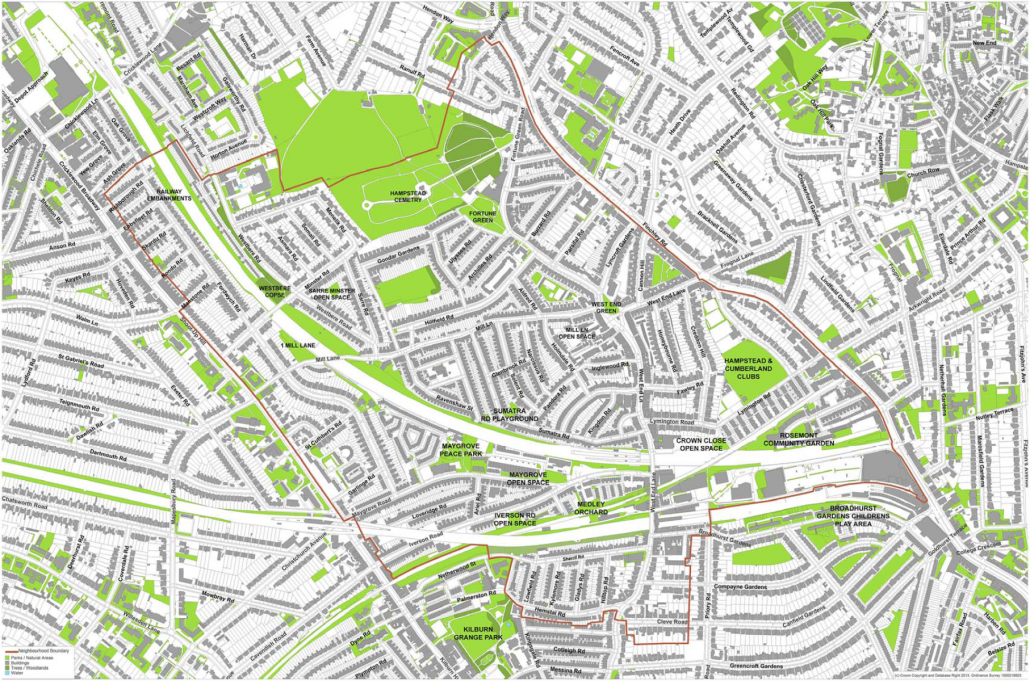 The green spaces of West Hampstead

We’ll look in more detail at the various sections of the plan once it is finalised. In the meantime, if there’s anything about it you like, don’t like, vehemently object to… then now is the time to speak.