Since publishing two stories last year (part one, ask part two), readers have suggested more musicians who lived in the area. Some stayed only briefly as their career was just beginning and they had young families.

Guitarist Hank Marvin was born in Newcastle as Brian Robson Rankin. When he was sixteen he came to London with his school friend Bruce Welsh and in 1958 they joined Cliff Richard’s band The Drifters after meeting their manager at the 2Is coffee bar in Old Compton Street. The band also included drummer Tony Meehan who had grown up in Sidney Boyd Court on West End Lane. After changing their name to The Shadows because of the US group called The Drifters, Cliff and the band achieved considerable success. Hank and his first wife Beryl were married in 1960 and lived in Greville Place about 1962. They had moved to Hendon by January 1963 when he legally changed his name to Hank Brian Marvin.

In his autobiography, Hellraiser, Ginger Baker says he lived in Mowbray Road for a short period. He left the house because his wife Liz was pregnant and no children were allowed. At the end of November 1960, he moved to share a basement flat with fellow drummer Phil Seaman (who Ginger called ‘God’), in Ladbroke Grove. In 1966 Ginger formed Cream with Eric Clapton and Jack Bruce.

Cream was one of the most successful British Supergroups and played their own mix of blues and jazz. In 1966 Eric Clapton was playing with John Mayall’s Bluesbreakers, Jack Bruce was in the Manfred Mann band and Ginger Baker was with the Graham Bond Organization (GBO). Because of Graham’s drug problems and erratic behavior, Ginger was effectively running GBO and wanted to form his own group. The three of them met at Ginger’s house, 154 Braemar Avenue, in Neasden to rehearse. The first Cream gig was at Manchester’s Twisted Wheel on 29 July 1966. Then on Sunday 31 July they played at the Windsor Jazz and Blues Festival and although it poured with rain, Cream caused a sensation. Their manager Robert Stigwood thought they would have a similar appeal as the GBO and had booked them into a number of clubs on the Blues circuit. So two days after their success at Windsor they played their first London gig at Klooks Kleek in West Hampstead on 2 August. They left the small clubs and were soon filling stadiums. (For more information see our book Decca Studios and Klooks Kleek).

As is well known, Brian was a guitarist in the Rolling Stones. He was born in Cheltenham and came to London at the beginning of 1962 where he met Mick Jagger and Keith Richards at Alexis Korner’s blues club in Ealing. Brian’s young girlfriend Pat Andrews arrived in April with their baby son Julian who was born in October 1961 and named after Julian ‘Cannonball’ Adderley, the great American sax player. They had a short stay in a flat in Weech Road, opposite the Hampstead Cemetery, but were asked to leave because of the baby. Then they found a flat in Powis Square and Brian got a job in a civil service clothing store. Pat went to work in a laundry. But in September 1962 she took the baby and left Brian and he moved into the infamous Edith Grove flat with Mick and Keith.

About this time Brian took a job in the sports department of Whiteleys, the large store in Bayswater. The Stones became famous under their manager Andrew Oldham, but a rift developed between Brian and Mick and Keith. Then on the morning of 2 July 1969 Brian aged 27, died under suspicious circumstances in the swimming pool of his home in Cotchford Farm in East Sussex. Three days later the Rolling Stones played in Hyde Park and Mick read a tribute to Brian. The Stones went on to become one of the most successful bands in the world.

Rod was the half brother of John Mayall from the second marriage of their father Murray Mayall, a jazz guitarist. Both the brothers became keyboard players in the 1960s. Rod played with several Manchester bands including Ivans Meads. In 1969 he was in the band Flaming Youth with a young Phil Collins. Rod said that he lived in Sherriff Road about 1970/71.

Doris was an R&B singer and songwriter who was born in the Bronx and sang in her father’s Pentecostal choir. She sang with many soul singers before she co-wrote and recorded ‘Just One Look’ which reached US Number 10 in 1963. The song has been covered by The Hollies, Linda Ronstadt, and Bryan Ferry. She was a backup singer for James Brown, The Rolling Stones, Dusty Springfield, Cary Simon and Nick Drake. In 1969 she came to England and signed with the Beatles Apple Records and released her first album the following year. Throughout the 70s she worked in England and was known to her fans as ‘Mama Soul’. With her sister she wrote ‘Mama, I Want To Sing’, a musical based on her life which ran in both New York and London – Chaka Khan played her aunt in the London production. She was interviewed at her flat in Cholmley Gardens in 1974. Doris died in her home in Las Vegas in 2004.

Born as Yvette Marie Stevens in Chicago, Chaka Khan has had a singing career since the 70s. Known as the Queen of Funk, she has sold about 200 million records. In 1973 she was the lead singer in the band Rufus and the following year, their record ‘Tell Me Something Good’, reached Number 3 in the US charts. Between 1974 and 1979 with Chaka’s powerful voice they had six platinum selling albums. Her first solo album was in 1978. In 1980 she appeared as the church choir soloist in The Blues Brothers film with John Belushi and Dan Ackroyd. In a wonderful career Chaka has won 10 Grammy Awards and collaborated with people such as Ry Cooder, Stevie Wonder and Ray Charles. She has lived in London since the 1980s and was in Hilgrove Road, by the early 90s. 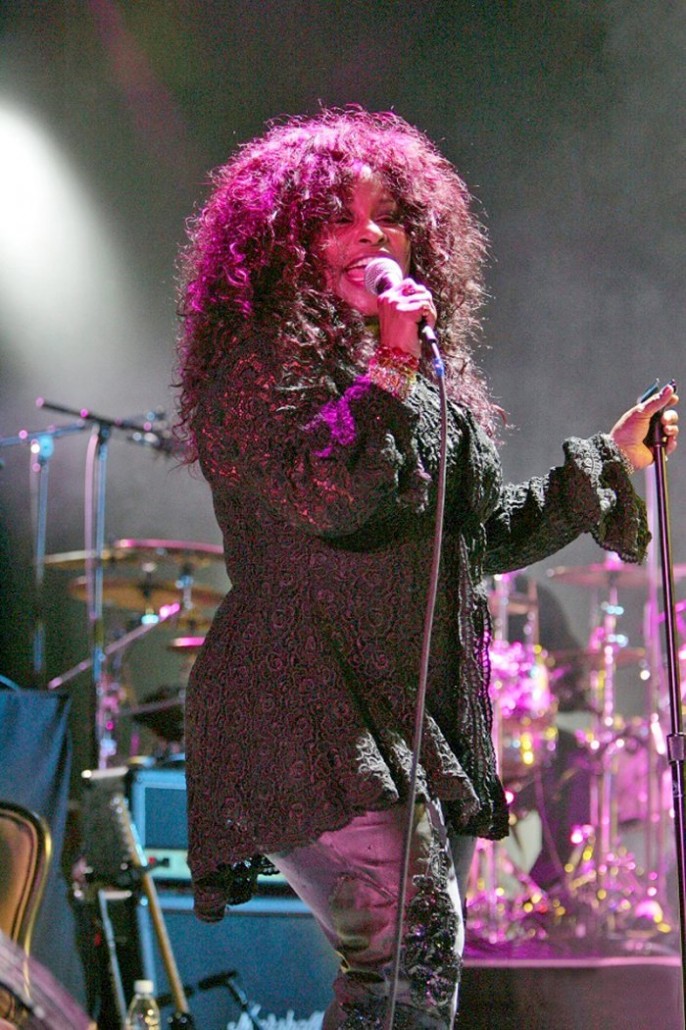 Drummer Jon Moss was born in the Clapham Jewish Boys Home and was adopted when he was six months old by the Moss family in Hampstead. He went to Highgate School from 1970 to 1975. He had several jobs after leaving school, including working in his father’s clothing store, and as a tape operator at Marquee Studios. In 1976, after meeting Joe Strummer in Camden Town, he tried out as a drummer with the Clash. But this did not work and he joined Riff Regan in a band called London. After an injury in a car crash on New Year’s Eve 1977, Jon joined The Dammed. In 1981 he and Boy George formed Culture Club and achieved considerable success. Since then Jon has played in many other bands. In 1977 he was living in a flat in Burrard Road which he said was terrible; with no heating and no hot water and an electric meter. There was another local connection when he held his wedding reception in the wine bar on the corner of Aldred Road and Mill Lane.

Miles was a musician who called himself Riff Reagan in the 70s. In 1976 he put an advert in the Melody Maker for a drummer, which was answered by Jon Moss who had briefly been in The Clash. Jon came to Miles’ flat in Fortune Green Road in his father’s gold Rolls Royce and Miles thought it was a windup at first. With Steve Voice, who lived in Crediton Hill, they formed the punk band London. They rehearsed in a lockup garage just off the Kilburn High Road. Managed by Simon Napier-Bell, they played at the Marquee and toured with The Stranglers. The band broke up and Miles went on to be a writer of stage plays and scripts for Frankie Howerd. In the 80s he moved to Shootup Hill.

Steve Voice became a successful record producer. In 1985 he married Liza Rosen who had been Billy Fury’s lover for 14 years until he suddenly died in their St John’s Wood home in 1983. Liza and Steve had famous friends such as Paul and Linda McCartney and Morrissey sang at their wedding. But after eight years of marriage Steve, using large amounts of cocaine, became very violent and beat Liza up. They were divorced in 2000 and he died in America in 2003.

Chalie Dore is a singer, songwriter and actress who appeared in The Ploughman’s Lunch (1983). Her biggest hit was the 1980 ‘Pilot of the Airwaves’ which received considerable airplay in the US and reached Number 13. It was also the last record to be played on 5 November 1990 by Radio Caroline as an offshore radio station. Her songs have been recorded by Tina Turner, George Harrison and Celine Dion. Charlie lived in Lymington Mansions from 1978 to 1984.

Mel Blatt and Shazney Lewis formed the group All Saints in 1993.  After Simone Rainford left the group the Appleton sisters joined in 1996. Nic and Nat were two of the four daughters of Ken and Mary Appleton who had moved to Canada in the mid-1960s. About 1980, when Nat was seven and Nic was five, their parents split up and Ken returned to London with Nic and older daughter Lorri, while Nat and Lee the eldest child, stayed in Toronto with their mother. Eventually, the family reunited and the girls were brought up in Canada, New York and London. About 1981 they lived in Cheshunt House in Kilburn. Nic and Nat attended the newly opened Sylvia Young Stage School where Melanie Blatt became a friend of Nat’s.

All Saints, who were named after the road near the ZTT studio, had their biggest worldwide hit with ‘Never Ever’ which was Number 1 in the UK charts in January 1998. They became one of the most successful groups of the 1990s with sales of over ten million records, including nine top ten singles and platinum and gold albums. The group broke up in 2001 but reformed in 2006 to record a third studio album. However they did not tour as a group and each went on to have solo careers.

Roisin is a singer songwriter from Ireland. In 1994 she became part of the duo Moloko with her then boyfriend Mark Brydon and they released their first album in 1995. ‘The Time is Now’ was their most successful single reaching Number 2 in the 2000 UK charts. After they broke up Roisin continued with a successful solo career. She was living in Brondesbury Villas until recently.

Richard Ashcroft, Nick McCabe, Simon Jones, and Peter Salisbury formed The Verve in 1989 in Wigan. Guitarist and keyboard player Simon Tong joined them later. At one time all the band, apart from Richard Ashcroft, lived in Brondesbury Villas. Their single ‘Bitter Sweet Symphony’ became a world wide hit in 1997. The band recorded four albums between 1993 and 2008 and broke up and reformed several times.