The “Save the Trees” petition that’s trying to prevent Ballymore chopping down the trees at West Hampstead Square has gained some momentum, but is it all a futile exercise?

Maygrove Road is now partially closed for three months, but the council and developers have agreed to ease some of the restrictions after a public outcry over the lack of notice.

The West Hampstead bag has made it to Ariana (the original Manhattan restaurant of which Kilburn’s Ariana II is a spin-off) and to the Vince Lombardi trophy. 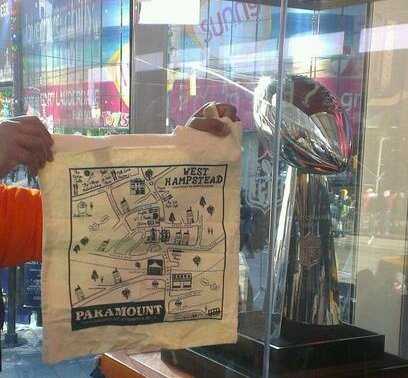 Camden launches its free public WiFi service and West Hampstead is in the first wave.

There was a big public meeting about the final draft of the Neighbourhood Development Plan. It spanned, basement excavations, “skyscrapers”, trees (of course), toilets and much much more. Full recap here.

The online mapping tool that lets you feed your views back into the planning process has had a major overhaul. Register now and start commenting.

We looked at yet more famous musicians who’ve lived in the area, including Ginger Baker, Chaka Khan and the Appleton sisters.

Tom’s Diner revisited The Arches. The prawns were “proud and glowing” and Tom shared a dessert!

Out of the Furnace is the Film of the Week. Check out all the local films here.

Which pub quiz is on when? Answer: Look at our round-up of all the local options.

Billy Bragg was in West Hampstead on Friday filming a programme about skiffle-meister Lonnie Donegan. Bragg found time to pop into Wired for a coffee.

A 48hr tube strike is planned from 9.30pm on Tuesday (and another one same time next week). Jubilee Line may run Stanmore-Finchley Road service). Thameslink, Overground and bus services will all operate.

Totally weirded out by a bus in Sydney CBD which just went past me. Had signs for West Hampstead & Kilburn, wtf