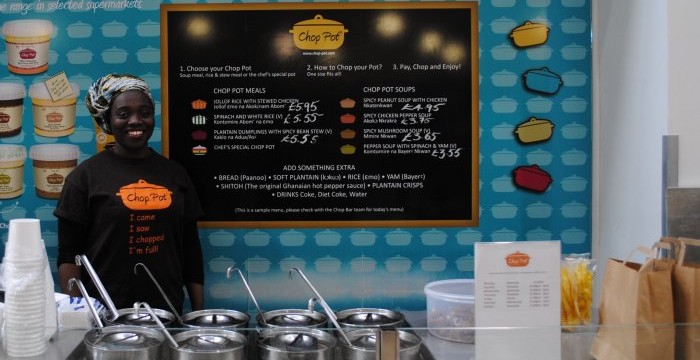 People don’t tend to salivate at the prospect of shopping centre dining. Indeed, in some places it seems we’ve barely moved on since the days when a jacket potato with chilli was considered cutting-edge cuisine.

Yet, on the eve of another restaurant opening there – Frankie & Benny’s starts trading Monday – the O2 Centre on Finchley Road is showing signs of becoming a dining destination, especially as two more intriguing eating places have popped up in and among the more familiar chains. Not that it’s easy for these start-ups to mix it with the big boys. It take determination and a keen understanding of what the centre looks for from restaurants.

Falafel City, on the upper floor, was founded by Mitan Sachdev and his wife Kajal in 2011. It took them two years to refine their recipes and bring their product to market – and, crucially, to find the right location to open their first restaurant. 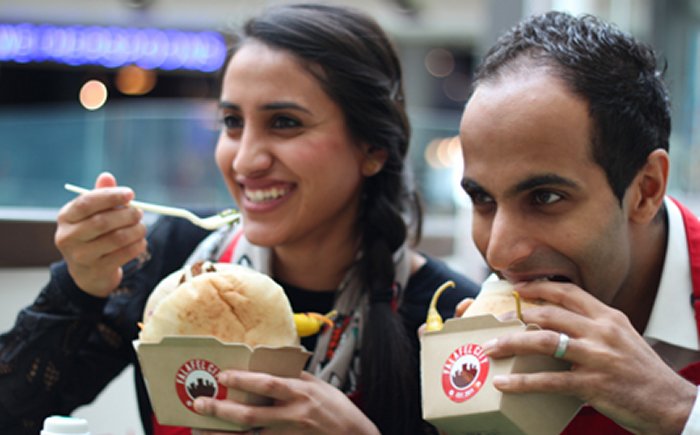 Mitan gave up his career at accountancy firm PricewaterhouseCoopers to follow his dream of becoming a restaurateur. Kajal developed all the recipes. “She’s an amazing cook”, he says. The couple has created what they believe to be a unique concept: freshly-cooked falafels with an international twist, served in a bright and buzzy fast-food environment.

One of the main hurdles for the fledgling business was finding suitable premises to rent. From the outset, the Sachdevs knew that they wanted their business to be surrounded by premium brands, but with no track record of running a restaurant, many retail landlords were reluctant to take them on.

The O2 Centre unit was ideal, says Mitan, who’s far removed from the clichéd streetfood vendor parking a van in a south London carpark. “We’re grateful to the O2 Centre management for taking a bit of a punt” he says. Perhaps reflecting his corporate background he adds, “I always wanted to be near a Vue, and near a Virgin Active.” How convenient!

It’s clear that branding has played a big part in Falafel City’s success. “If you want to play with the big boys, you have to look the part,” explains Mitan. Indeed, Falafel City, with its distinctive rotating sign, fits in comfortably alongside its nearest neighbours Byron and Yo! Sushi.

Affia Bioh has a similar story. Affia gave up her job in banking to start selling Ghanaian food. After successfully testing the market with a chilled range, which Selfridges took on and still sell in its food hall, she wanted to branch out to a “Chop Bar”. The result: Chop Pot, which sits opposite Waterstone’s on the ground floor on the way to Sainsbury’s and sells hot takeaway food. 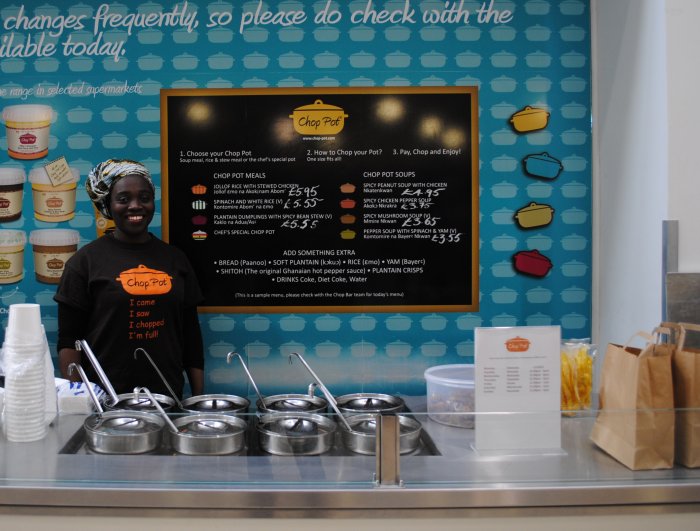 The O2 Centre was a logical location for Affia, who was born and raised in the area – she attended South Hampstead School for Girls and St Augustine’s in Kilburn. She likes the diversity of the local population. “Local people are very inquisitive about different cuisines and want to try them”, she says. She’s happy to talk customers through the different dishes, which are Ghanaian street food classics such as Jollof Rice, a spicy one-pot rice dish, and a deliciously rich chicken and peanut stew.

Like the Sachdevs, Affia is pleased with the support she has received from the O2 Centre and recognises that it’s taking a chance on a small start-up business, and proud to be offering something different. “I’m carrying the torch for West African food in the O2 Centre,” she says proudly.

Jason King, who manages the O2 Centre on behalf of owner Land Securities, says he welcomes the arrival of both Falafel City and Chop Pot. “There’s a lot of pressure on the shopping centre industry from online businesses, so the whole experiential side, such as food and leisure, is increasingly important.”

For Jason, it seems that creating an environment where well-known chains rub shoulders with smaller players is an important means of differentiation. “It prevents that feeling of ‘every shopping centre looks the same’ which can creep in if you’re not careful.”

He sees it as mutually beneficial: start-ups gain exposure and visibility, while the centre gets credibility by being able to boast a wide range of dining options. “In terms of the variety, we have a good mix. Byron is a great brand for us to have. Nando’s is still one of the big movers and shakers, and Yo! Sushi is a worldwide brand. It’s great to have them alongside small startups like Falafel City and Chop Pot, which is a lovely story of someone setting themselves up in business with a great product and lots of enthusiasm, but who have also got their branding to a level where it can fit in amongst the bigger players.”

Once again, the importance of branding comes to the fore. “It’s got to feel right,” says Jason. “We’ve got a design guide in terms of what we want to see from shop fits. We’re not looking for conformity, but looking to set the bar at a certain level.”

Anna Adamczyk, restaurant manager at Zizzi, one of the centre’s long standing tenants, agrees. “The new developments here are exciting for everyone – the local community and existing businesses. Hopefully by having more options for customers, the O2 Centre will become a destination for those looking for somewhere to have a bite to eat.”

Centre manager Jason’s enthusiasm come to the fore as he talks about the changes underway; three new restaurants (Wagamama, Rossopomodoro and Frankie & Benny’s) are opening on the top level next to Falafel City. The work is scheduled to be completed by June or July, and the centre is planning a big launch event to promote itself as a dining destination. Zizzi also confirmed that its restaurant will be getting a refurb in July. It’s taken a while though, Wagamama and Rossopomodoro were first mooted at the start of 2013.

Jason King has been at the O2 Centre since Land Securities bought it in 2010. The place has changed quite considerably in that time, both in terms of the brands it’s brought in and the physical changes to the building. The company is intent on creating the kind of place that people in the Swiss Cottage/West Hampstead area – and beyond – will want to spend time in. Goodbye Jurassic Park-style fake rock interior and Hello outdoor terrace, which will be shared between the three new restaurants, bringing al-fresco dining to the centre – even if al fresco does mean “view of Finchley Road traffic”.

What do you think? Has the O2 Centre transformed into a dining destination, or is it still more of a pre-cinema pitstop? As ever, feel free to leave your comments below.

What have I missed since March 31st