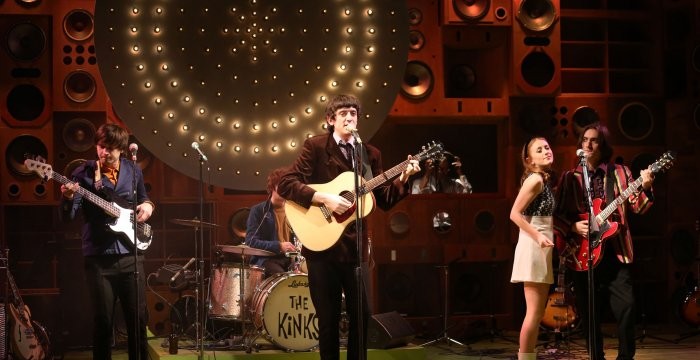 Sunny Afternoon is a musical that charts the rise of The Kinks, incorporating (unsurprisingly) the music and lyrics of Ray Davies and a new book by Joe Penhall, the Olivier-award winning playwright.

The story follows the ups and downs of The Kinks, from their working class north London beginnings, through the World Cup winning “Sunny Afternoon” of ’66 to finally playing to a sell-out Madison Square Garden. Along the way it explores some of the controversies that plagued the band, including legal battles with their management, being blacklisted in America and strained relations between band members.

The fact that Ray Davies, a prolific songwriter, frequently drew inspiration from events around him means that The Kinks’ back catalogue fits seamlessly into the narrative. The variety of song performance style also helps; sensitive acoustic duets sit alongside concert-style performances complete with backing dancers in wonderfully evocative ’60s outfits. The set is similarly evocative of the early ’60s and director, Edward Hall, has even gone so far as to include a catwalk style extension to the stage, which adds to the concert-feel and draws the audience in.

The stage is liberally scattered with musical instruments, which the actors switch between with ease. The cast itself was well balanced; I particularly enjoyed John Dagleish’s understated portrayal of Ray Davies, a man who by his own admission is self-conscious and publicity-shy.

At times the performance felt a little raw, but given this was only the third preview show I am sure that these will have been polished by the official opening on 1st May. Overall it was a great show, the depth of The Kinks’ back catalogue is sensitively showcased in a fun yet gentle and at times moving production.

I would recommend it, regardless of whether you are a Kinks fan, but expect to spend the following few days humming many of their songs!

What have I missed since April 14th?