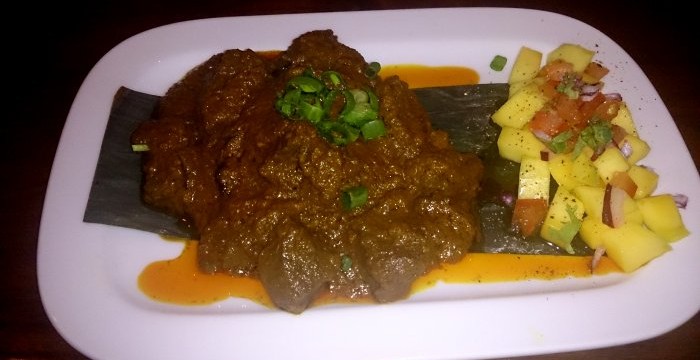 Many of you will know that our first visit to Mamako was a bit of a disaster. We did say, however, that the food was good and we’d give them some time to settle in before reviewing it properly.

That time had come. Last Wednesday, five of us went to give the place the once over.

Mamako retained much of the decor it inherited from Spiga but the cuisine has shifted from the Mediterranean to Asia. Perhaps too much of Asia, as Thai, Japanese, Malay, Koraean and Vietnamese dishes all seem to compete for attention. Malaysian cuisine is something of a hybrid of Chinese and Indian food with rich curries such as beef rendang as well as classic noodle and rice dishes such as Mee Goreng and Nasi Lemak.

Menus are flipside of the place settings and it’s hard to choose from so many options. 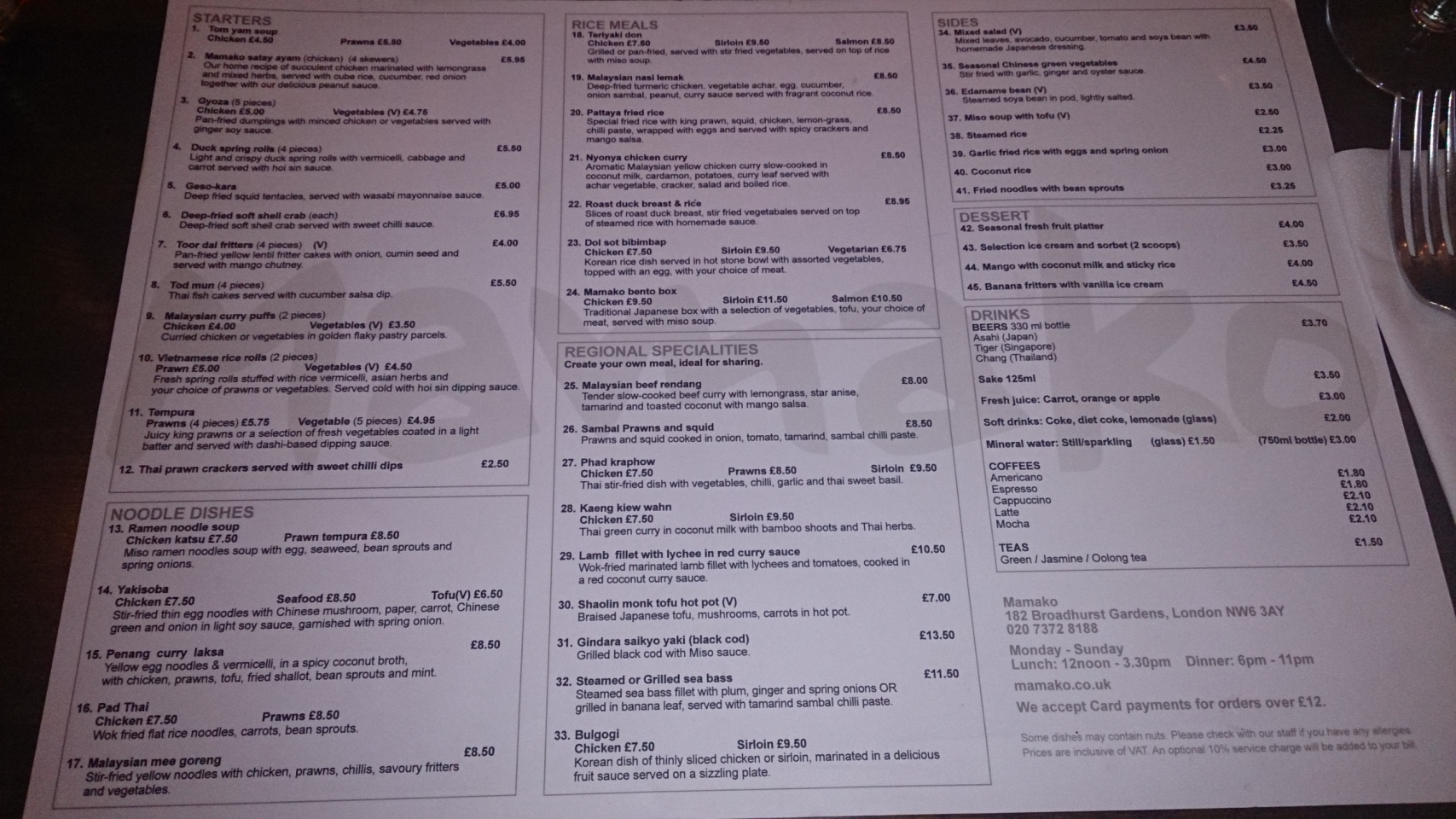 Perhaps aware of the service issues that dogged our opening night meal, we were asked to order starters first and mains later. We shared deep-fried squid tentacles, chicken gyozas, vegetable Malay curry puffs, Vietnamese rice rolls and Toor dal fritters. The squid was the let down of these, the batter wasn’t crispy enough and the squid was perilously close to being undercooked. However, the other dishes more than made up for it, especially the toor dal fritters, which had a comforting warmth of spice to them, and the Vietnamese spring rolls, which come more generously stuffed than those at Ladudu. Gyozas were fine, though it’s getting to hard to stand out with this ubiquitous starter. The Malay curry puffs, which are a bit like samosas, were also good. 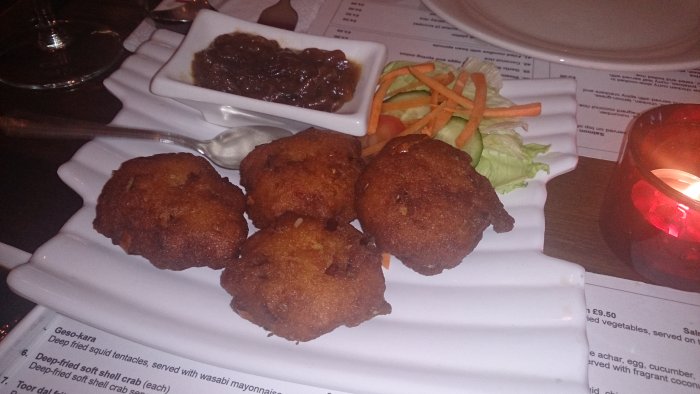 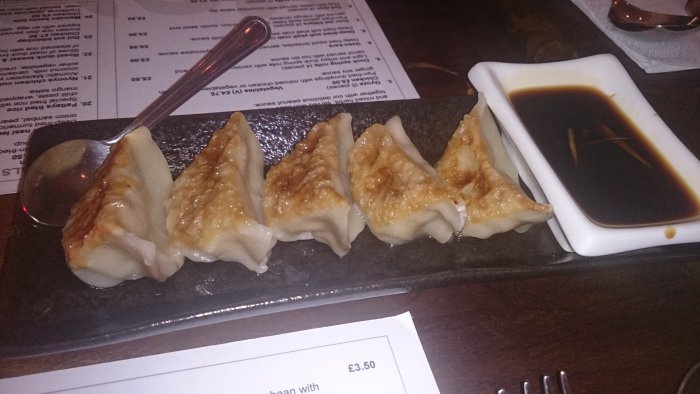 I eschewed all the other cuisines for my main course and went for what Mamako does best: Malaysian food. I’ve loved beef rendang ever since I first had it in a Singapore shopping mall severely jetlagged and with no clear idea what it was I ordering. The short-lived Ammis Curry in Kilburn did a kicking-hot version that oozed flavour. Banana Tree does a decent rendang though twice I’ve had it there and it’s been too dry (the sauce should be dry, but the meat should be tender). How did Mamako’s stand up? Very well. The consistency and texture was about right – I would have liked it a little hotter and that deep meaty aftertaste wasn’t quite there, but I’d very happily order it again. 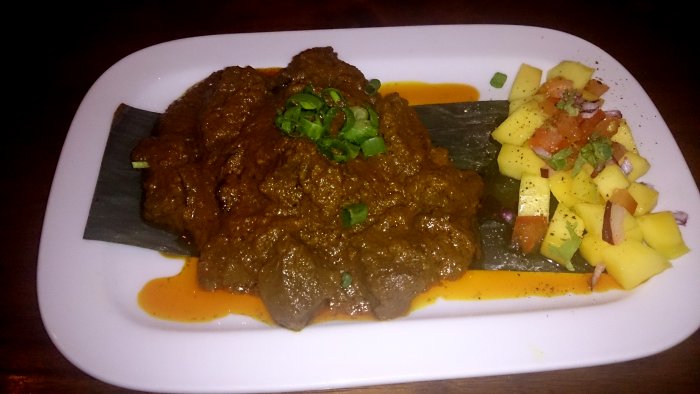 I’d love to see Mamako have the courage of its convictions and become just a Malaysian restaurant without trying to offer food from around the whole continent. Malay food is definitely its strength and a more limited menu might help the kitchen overcome some of the timing issues that are still reported on Twitter, even though there were no holdups at all with our meal. But enough of what I think… let me hand over to my fellow reviewers:

Jane
It does seem odd that the menu is quite so pan-Asian – SE Asia would be enough for me – but I did enjoy all the regional foods we tried. The lentil cakes were delicious with their chutney as a starter. I chose the Mee Goreng for my main (not Nasi Goreng as I described it, gently corrected by Nicky who explained that Nasi means rice and Mee means noodles). Everyone was wide-eyed at how large my dish was but I ended it up eating it all because it was so delicious. I really like Mamako, especially for its fresh ingredients, careful preparation and lack of excessive sugary-salty-fatty sauces that some pan-Asian places rely on to satisfy our cravings!

Tom
Service was warm, and with more confidence than in their anxious, early days, and the whole place had a sense of things settling into a rhythm. Starters were enticing. The little parcels and morsels were flavoursome, with fresh, pungent spicing, and fantastic textures on the outside. Squid had wonderful, light batter, though were a little lightweight given the tentacles were best discarded. 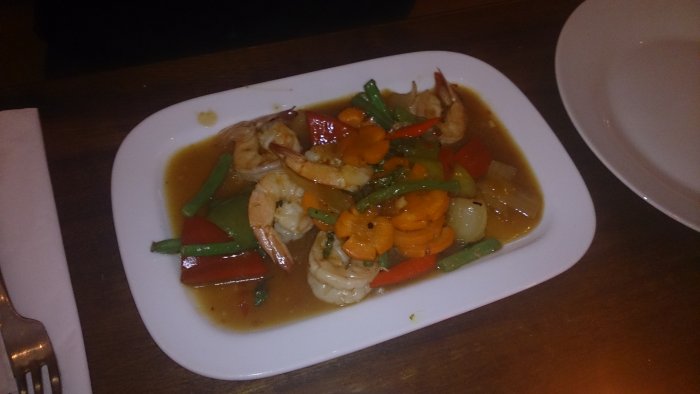 My phad kraphow with prawns, chilli, garlic and sweet Thai basil, fried with vegetables, was also impressive, though more variety in the veg would have perhaps added an extra dimension. Everything we ate was well-seasoned, with deep flavours coming from various different angles. Sides of bok choy and egg-fried garlic rice were very good, while my noodles were a slight let-down as were overcooked for my tastes; too soft and mushy. Worth noting the Tempranillo, which at £3.75 for a (175ml) glass was a surprise; really, really lovely. Ending with a sake was pleasurable, too!

Nicky
Being a fan of Malaysian food (and half Malaysian myself) I was keen to try the unofficial national dish, nasi lemak. It’s coconut rice, traditionally accompanied by cucumber slices, egg, peanuts and spicy sambal sauce. Mamako’s version may not have had the ‘wow’ factor that won this year’s Masterchef title, but it was a good interpretation of the dish. Often eaten for breakfast in Malaysia, here it was made more substantial with some fried chicken and a small bowl of creamy – but fiery – curry sauce. The sambal tasted authentic with its inclusion of anchovy paste and chili kick, and there was also a welcome crunch and freshness from the pickles on the side.

Overall it was an enjoyable evening. The ambience is slightly sterile – be prepared to bring your own atmosphere – but the food is fresh, feels authentic and is reasonably priced. I’ll be back to Mamako to sample the rest of the menu, Malaysian and beyond. 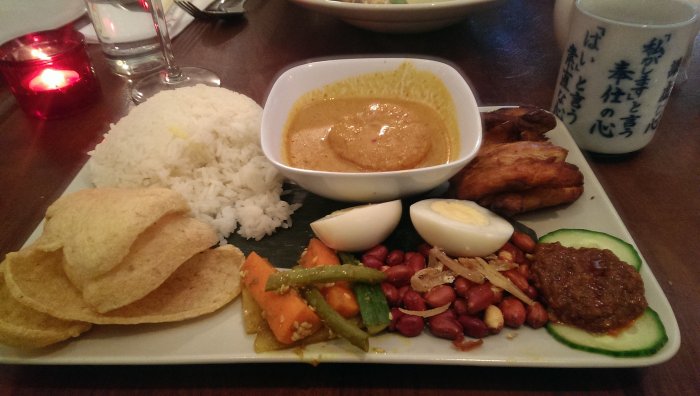 Laura
We were made to feel very welcome at Mamako, attentive service without being crowded and the atmosphere was nice, with background music playing at the right level and good lighting (are those amazing lampshades a remnant of Spiga?!). The quality of the food was good and I would consider it very good value for money. Geographically the menu is pan-Asian, though I think we all plumped for Malaysian main dishes, which seem to be the speciality. The chicken curry was really well cooked, fragrant with a bit of a kick but not face-meltingly hot and a good size portion. The selection of starters we tried were all tasty, but for me the stand out dish was the dhal fritters, which were delicious and I could have eaten a whole plateful! We were all too full for desert, so I look forward to a return visit to sample more of the menu. A great addition to the local restaurant scene. 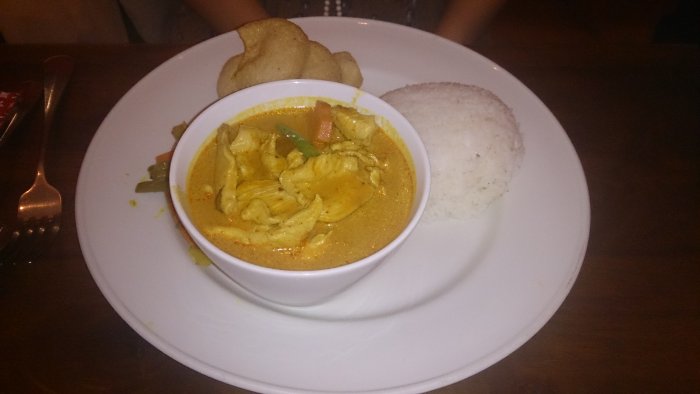