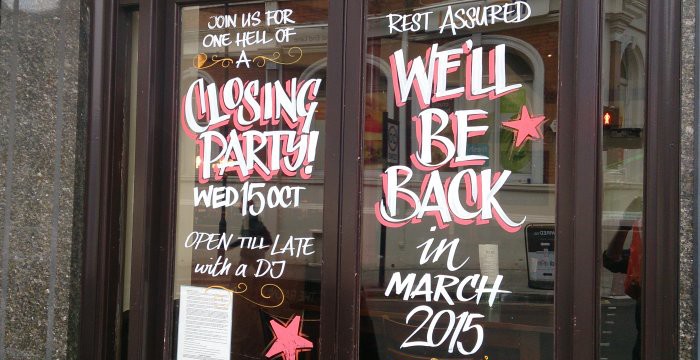 Stained glass windows were broken, but nothing was taken in a “bungled break-in” of St James’ church and post office.

After looking at Kentish Town a few weeks ago, this week’s Economist suggests that the success of Aldi in Kilburn should have the big supermarket chains worried.

Staff at South Hampstead’s Tesco committed a howler, and threw out a blind customer because they didn’t realise her dog was a guide dog. The company has since apologised and offered to make a £5,000 donation to a charity of the customer’s choice. 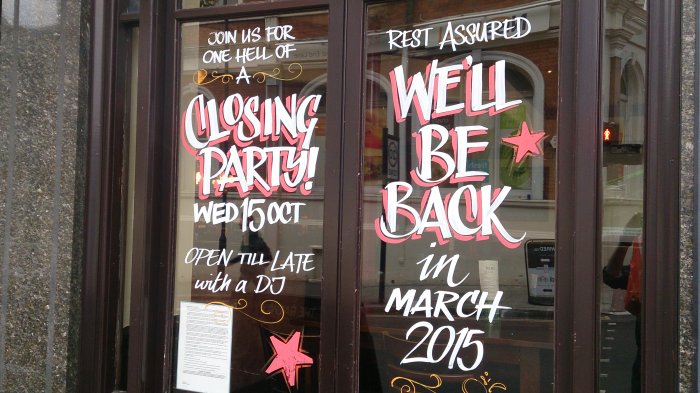 The Railway pub closed on Wednesday for five months as work is done to convert the upper floors of the building. The Gallery closed Sunday night for two weeks for some less drastic work to take place – it reopens for a Halloween Party.

The tiny Christmas trees went up on West End Lane (a little early thought some), after Camden found external sponsors to cover the costs of Christmas decorations across the borough.

A new delivery service is bringing West Hampstead restaurants’ food to your door.

Keep your eyes peeled over the next couple of days – there’s a new event coming up on October 30th that I’m sure you’ll want to come along to! In the meantime, the next whampsocial is this Wednesday at Frida’s bar in Mamacita from 7.30pm.

Are we heading for an oversupply of rental properties in West Hampstead?

Tom checked out the gnocchi at The Salt House on Abbey Road. Did it meet his exacting standards?

Sirous has a new name and a new chef. El Rocio, as it’s now to be called, will apparently be 100% tapas.

Cyclists should pedal over to Sidings on Monday evening to learn more about proposals for cycling in the area, and London more broadly.

Tuesday’s Area Action Group meeting will be the first since May’s council elections. Come along and catch up on the local news.

Parts of Cholmley Gardens were evacuated on Tuesday after a gas leak.

The Little Waitrose is due to open on October 28th.

A residents association for Maygrove, Iverson, Loveridge, Ariel and Medley Roads came a step nearer to forming after a midweek meeeting.

There’s a petition to install a lift at West Hampstead tube station. Not sure how much good such things do, but it’s free to sign so…

Although a slightly odd petition to get people to stop spitting on the Kilburn High Road has at least encouraged some businesses to start putting signs up.

The Judge is Film of the Week, check out all the latest film news locally.

Lost a Beckford School PE bag? George the greengrocer on Mill Lane has it!

Loud sirens around the Thameslink station once again disrupted residents’ weekends. The noises are believed to be safety sirens alerting crews working on the Midland Main Line when other trains are coming through.

Swedish folk band Thisell is our Gig of the Week (Thursday at the Earl Derby). Check out all the local music listings.

There is a surprisingly large number of people wearing slippers at finchley road station.