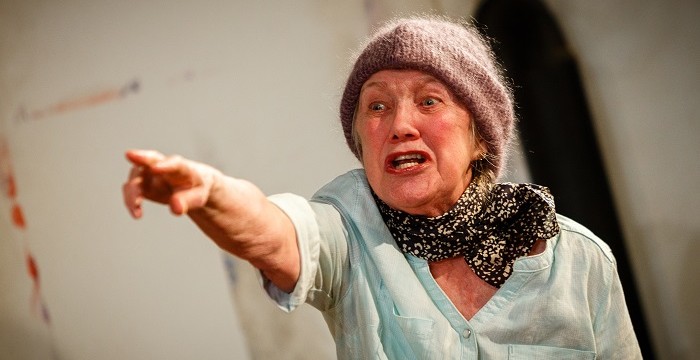 It’s Virgie’s 81st birthday, and she gathers together her friends and family for a celebration, and an important announcement. Virgie intends to kill herself. The play follows the reaction to Virgie’s declaration and explores how the choices we make can change our lives forever.

Virgie is a woman who has always been torn between her art and motherhood, and it becomes apparent that her dedication as an artist has severely compromised her relationship with her children Haydn and Orin, who are, as adults, scarred by her neglect. Virgie’s sister Shirley, and friends Tom and Sonia, make up the rest of the party, all coming to terms with Virgie’s announcement, trying, and failing, not to give in to the absurdity of it all. 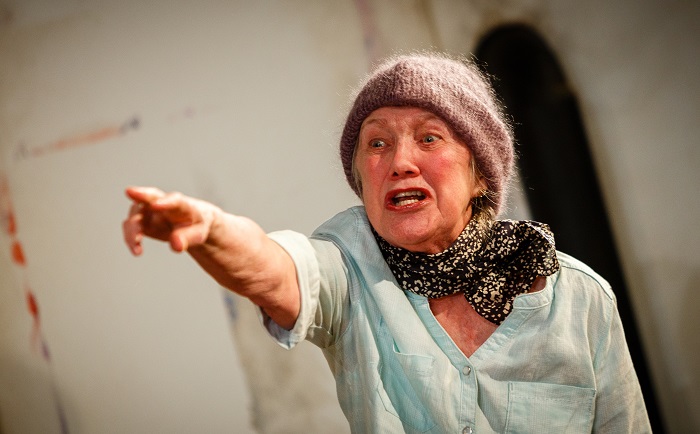 None of the characters are particularly likeable, they are all self-involved and thoughtless, but in that they are relatable and frequently very funny. Tom the actor, and his long suffering wife Sonia, provide a lot of the comic relief, as two people more or less tolerating each others’ eccentricities. It’s hard to tell if Virgie really wants to die, is succumbing to madness, or if this is all some play for attention, but ultimately it is the question of control over one’s own existence, and of dealing with loss, which the play forces us to address. While this is a comedy, and I frequently laughed out loud, it is also a moving tale of family and friendships, and the lengths we will go to in order to find a sense of normality in the chaos.

Rachel Bell, as Shirley, the officious younger sister, steals the show in a really well written part, just the right amount of self involvement, tempered with pathos and played with the perfect level of self awareness. She has some great lines and delivers them with total relish, you can’t help but warm to her despite her apparent cold heartedness, which, as the play develops, we learn is really just her mode of survival.

Haydn, Virgie’s daughter, is believable, real, less a caricature than the others, and genuinely seems somewhat lost. Veronica Roberts has a lovely subtlety in her performance, we see glimpses of the rage burning within, but this is someone who has learned to swallow her pain, leaving her unable to connect intimately with others. Her sense of daughterly duty is something many will relate to, doing the right thing no matter how much it costs her personally. Her interaction with Roy, the poor cabbie who finds himself inadvertently caught up in the drama, is a real highlight.

The one misstep is the character of Miranda, a former student of Virgie, who appears in the final scene, to provide a new perspective on the story we’ve been fed piece by piece throughout the play. Unfortunately her wide-eyed youthful exuberance jars with the ageing melancholia of the other characters, whom we have been investing in from the start. It’s an interesting proposition, that we would open up and confide in a relative stranger, while hiding truths from our nearest and dearest, but I found Miranda’s complete lack of tact and diplomacy wildly irritating and so in the end the message was somewhat lost on me. But perhaps that’s the point.

Set and Costume Designer Michael Taylor has done a fantastic job of bringing a flavour of the Essex coast to North West London, completely transforming the stage at the Tricycle, so the action is thrust into the horseshoe auditorium. Virgie’s home feels lived in but isolated, windswept, with autumn creeping around the door.

Given the uncomfortable and dark subject of suicide, it takes a while for the audience to really get into the comedy of the piece. But this is a well-directed ensemble, with several strong performances, finding the humour in tragedy, without playing for laughs unless it is appropriate. A few choice nods to the Electra myth work really well without being heavy handed and I found myself laughing in recognition at the pain and pathos of life and its inevitable end.

After Electra is at the Tricycle Theatre until 2 May 2015.