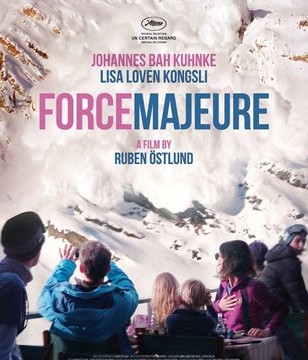 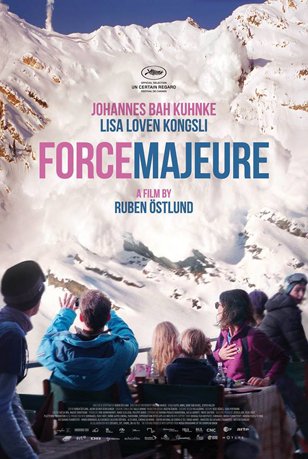 For a while it’s seemed like you can’t turn on the TV without coming across yet another high quality Scandinavian drama series. It’s a remarkable achievement for a relatively small population a long way from the resources of Hollywood. The Nordic Noir phenomenon has also had some success in the cinema and now we have a new Swedish film getting rave reviews: Force Majeure.

The Times calls it “one of the most perceptive and savagely funny films of the year”; the Standard “a gripping film with a superb cast,” and the Guardian says it’s “compelling, intelligent and grimly entertaining”. It also warns that its not a date movie. So, the perfect film to see with your Film Club friends!

Force Majeure tells the story of a Swedish family on holiday in the French Alps. A tragic event changes everything and the film follows the repercussions. It may not sound like a cheery premise but many reviews describe the film as darkly funny. Come along and decide for yourself whether it’s a comedy, a tragedy or both.

We’re seeing the film at our usual home The Tricycle, but not on the usual day! We’ll be going to the 8.40pm screening on Wednesday April 22nd. As usual, we’ll meet in the bar beforehand from 8.10.

We’re delighted that once again there’s a special NW6 Film Club discount. Just quote WHAMPFILM when you book online or on the phone and you get £1 off.* To get the discount you must book ahead of the screening, if you just turn up on the day you’ll have to pay full price, and unfortunately it can’t be combined with other offers so if you’re already a Tricycle member, you’re better off using that to get £1.50 off.

The film will end fairly late but hopefully there will be time to head to the Black Lion across the road for a very quick drink and discussion.

FILM CLUB FAQ
How do I join Film Club?
There’s no membership as such. Just come along to the screening and join us in the Tricycle bar beforehand to say ‘hi’.

How often does Film Club meet?
Usually once a month. The exact date depends on the schedules at The Tricycle (our usual home) and other local cinemas.

* T&C’s: Limited offer, advance booking only. Not available retroactively or in conjunction with any other offer. Available at management’s discretion.

Property News: Rental market buoyant in run up to election