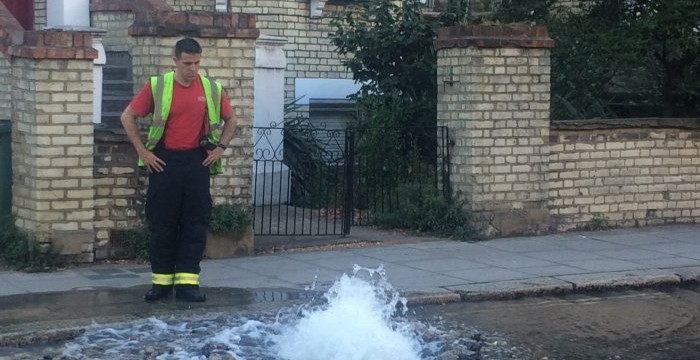 There’s more than £3 million to be spent in West Hampstead, including half a million to spend on improvements to the interchange area. But all this spending needs a masterplan that Camden keeps postponing citing a lack of resources!.

Not that it always takes much to improve the area. The Black Lion has redone its planting and it looks good. The O2 organised a clean up of its path – much better, thank you. Next up the Black Path! Tweet your pics of the worst bits to us and @camdentalking!

Disruption to traffic locally last week, firstly an accident closed off Finchley Road and the next day a burst water main on West End Lane. 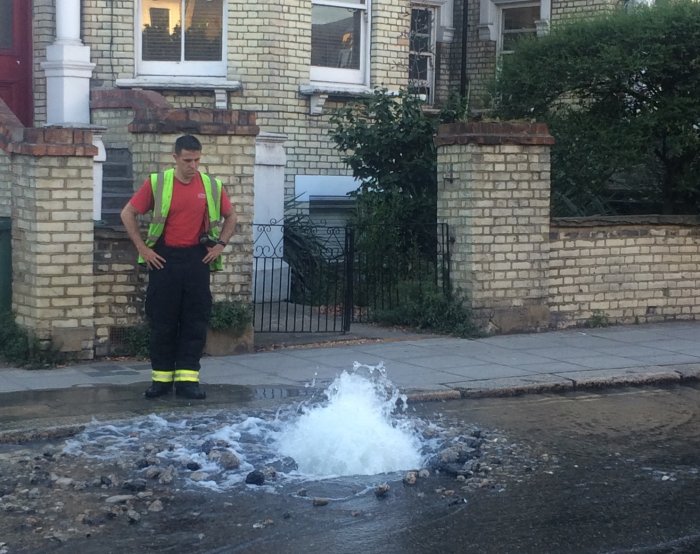 “Won’t get the part for that until Tuesday mate”. Photo via Philip Hewlett

On Mill Lane a house was sealed off as a crime scene after an AirBnB party got out of hand the night before, including a stabbing (allegedly).

After 34 years, a man was convicted of raping and murdering a teenager at her home in Belsize Road.

West Hampstead is getting some new community rooms, right on West End Green in the heart of WHampstead. Hallelujah.

More changes on West End Lane; Dylans the bakers is to become a hairdressers. Roni’s, the bagel bakery, closed ‘for refurbishment’, one of the most rapid refurbishments we have seen. However, the refurbishment of Bobby’s house (RIP La Brocca), continues at… a… much… slower… pace.

The bailiffs arrived at Paya. The Asian/pizza place appears closed for good. Across the road, Roger Samuel, the estate agent,, underwent a rebrand and will reopen soon as Jaffe.

The post office on Mill Lane has moved and opened in Dass the newsagents. It’s still a bit hidden but signage and ATM arriving soon. We also discovered why it’s called Dass (scroll down a bit on link).

Pokemon Go arrived in West Hampstead with a Pokemonster (?) joining RuNW6 on the Saturday morning jaunt. But the West Hampstead Safer Neighbourhood team was less enthusiastic.

It was Love Parks week. The sun shone on Kilburn Grange for its 7-hour festival. And a replacement outdoor gym appeared, almost overnight. Up on Fortune Green it was early morning yoga with the sun salutations, toward the rising sun, of course.

If you missed it, there was a Whampdrinks last week and a Whampdinner coming up very soon .If you’re not on the mailing list for the latter, you have zero chance of getting in. So sign up!

Sadly, a person was hit by a train at the Thameslink station.

Interim a new charity opening up in West Hampstead sets out to ’empower people through psychotherapy’. It is looking for low-cost rooms to rent. Any suggestions?

And finally… Roger the kitty went missing but WHL RTed and the little blighter was found.

If you're peering over the fence at West Hampstead trying to see the person who got hit by train, you need to have a hard look at yourself.

Got any West Hampstead news? " target="_blank">Drop us a line.