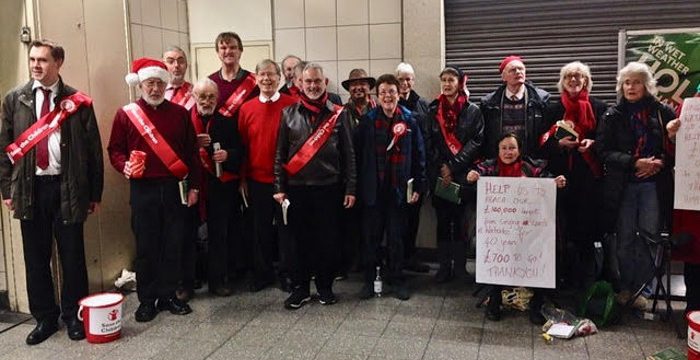 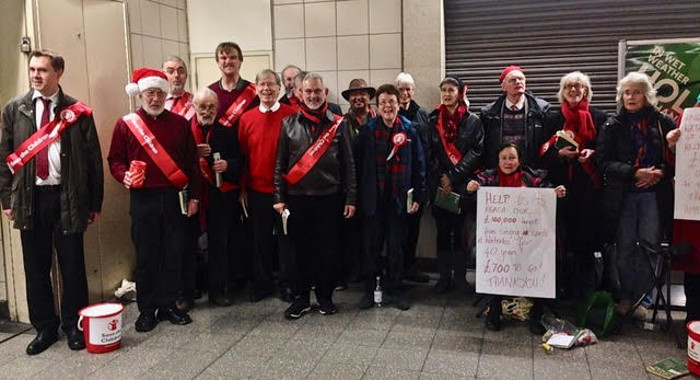 Well done Tessa Henderson (not in the picture as she was taking it) and her friends. Merry Christmas.

Every Christmas since 1977, West Hampstead resident Tessa Henderson has been organising her friends to go carol singing. They have had a pitch at Waterloo Underground ticket concourse for two evenings in the run-up to Christmas. I write ‘they’ because she couldn’t have done it without the support of friends and family, but she is very much the driving force behind it.

Tessa says “It’s all down to the tireless energy of the singers and collectors who come year after year.  I just do a bit of organising. It’s an amazing feeling to raise that kind of money just from opening your mouth”.

These aren’t just any carol singers. Tessa has been singing all her life and has recruited friends from renowned amateur and professional choirs, including over the years, a few who were members of the ROH and ENO chorus. It is hard work singing for more than two hours non-stop, in a chilly underground station, but it is also great fun and rewarding to be part of such an incredible fundraising effort.

Over the 40 years, they have raised money mainly for Save the Children, although in the early years they also raised some money for Shelter, Oxfam and Marie Curie. Thalea Turowski of Save the Children says “Huge congratulations to Tessa Henderson and the Waterloo carollers on their 40th anniversary! The incredible amount of over £100,000 raised during that time makes it possible for Save the Children to help children in the UK and around the world when they need us the most – thank you so much for your amazing support!”

In the first year, they raised £268.30 setting off on a journey, which, 40 years later, would see her reach the grand total of £100,160. To help reach that, in lieu of presents for her recent birthday she asked for donations to Save the Children, and this year she has set up a 40th anniversary Just Giving page.

The carol that gets the best response? Ding Dong Merrily on High! (Click on the link to hear them in action).

What have you missed since December 11th?