It was cold, and quite snowy. In case you didn’t notice. Some locals took it in their stride, and many (very many) of you whipped out your cameras.

As previewed last week, Ham opened (sorry Ham, we really can’t be bothered to keep inserting the line over the a). The cold weather threw up some challenges that probably weren’t in the business plan!

There has been a huge jump in fly-tipping reports. Locally, Camden is getting round to enforcing the no-bins-on-street rule it promised when the new contract was introduced a year ago. 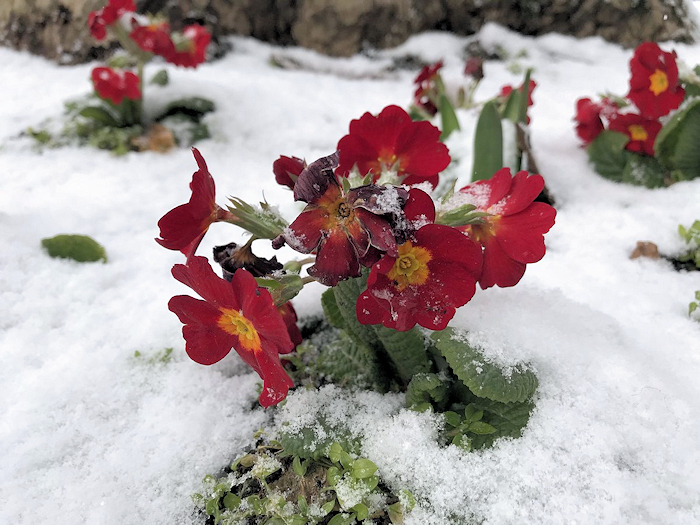 Flowers in the snow via @ingamells

Lately may have closed, but former owner Gordon Stevenson is still around and he talked to us about his 38 years at the helm of West Hampstead’s favourite club.

Kilburn Ironworks (whose owners are taking over Lately) is itself now for sale – offers around £1 million.

It’s Mother’s Day next Sunday. What better gift than something from your ‘hood.

The council tax increase we reported last week was approved, though Labour slightly wrong-footed the Tories by finding an extra £540,000 for extra policing, (or it could be said by adopting a Tory proposal).

The Mayor got interested in the West London Orbital Rail scheme, which would end at West Hampstead. What! more commuters? There was, however, no mention of how the £250 million scheme would be funded.

Those of you on Twitter may remember a recent plan to get a board games night up and running. Good news – it starts this week.

Walkies! The Wag Club, the doggie daycare place that opened on Mill Lane a year ago is on the move. It’s moving to larger premises: the former scuba shop in Child’s Hill.

West Hampstead actresses Emma Thompson and Imelda Staunton held a Q&A at the Tricycle. Thompson revealed that Nanny McPhee might become a musical and shared the experience she drew on for her performance in Love, Actually.

It’s quite an arty week
Wed 7th and Thurs 8th – 19:00 to 21:00 The Art Room is holding a pop-up exhibition of fashion illustrator Jo Bird RSVP
Thurs 8th – Local artist Alketa Xhifa Mripa will have her installation up in Kings Cross outside St. Martins
And why not pop in to the Camden Arts Centre to see the Giorgio Griffa exhibition?

Shoutout to the guy determinedly sipping his espresso at an outside cafe table IN A BLIZZARD. Mentally, he's in a square in Sicily and boy do I wish I could join him @WHampstead