West Hampstead Square, the Ballymore development on West End Lane, is still in the site clearance phase. The trees on the site will be removed very soon, but at least one group of residents wonders whether such drastic measures are necessary.

Removing the trees was all part of the original planning application, so it’s not like people weren’t warned. However, with a focus on building heights and overall design, less attention was probably paid to the fate of the trees.

This overlay shows a section of the site. The grey dots are the trees that will be removed and underneath you can see the foliage that forms part of the raised gardens for each block and trees along the access road. Click to see the full site image. 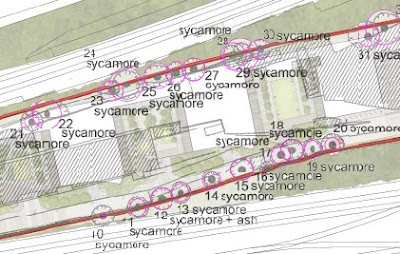 There are 32 trees on the site, according to the tree survey that was carried out two years ago. All were rated category “C”. This means that they are deemed to be of low quality or value.

Here’s the map of all the trees from the survey. Click for the large version. The trees that some locals think could be spared the axe are those to the north on the Overground railway border, which form a screen, and those at the far west of the site, which the survey suggests do not need to be removed

It is of course hard to dispute the experts’ view without some experts of your own. However, it is worth looking at the detail of the text (although it does appear to be confusingly contradictory) [my emphasis].

Considering the trees collectively, they form something of an intermittent visual screen between the railways and the site, but due to the proximity of the trees to the railway lines and to walls and fences, their safe useful life expectancy is unlikely to be great – for the most part less than 20 years.

It may be possible to retain a small number of trees such as G1, G2, T3, G4 and T5. G4 has the potential to grow significantly larger as do many of the other sycamores. Coupled with their poor form they are best removed and replaced with more modest landscaping proposals, consistent with the shape and size of the site.

In line with the proposed scheme plan (Appendix A), this assessment suggests that all trees other than G1-T5 will need to be removed; whilst theoretically some further tree retention could be attempted the benefits arising from such tree retention are considered to be small in relation to the costs and difficulties arising.

The main message seems to be “remove everything”, with all but five trees needing to be removed and those five “best removed”. Those five trees are all at the very far end of the site, so would have no impact on the screen from Iverson Road.

There’s been a strong “green spaces” lobby at most local planning-related meetings over the past couple of years. The placeshaping document published by Camden last year says: “Existing green ‘chains’ and habitat corridors along the railway tracks and existing sites of nature conservation…  are highly valued by residents and need to be protected and enhanced.”

Not a lot of protection going on here.

The railway embankments are important parts of the green chains and biodiversity corridors in this area particularly due to the number of railway lines that pass through this area. It is important to ensure that these are protected and enhanced, particularly where developments are proposed alongside the railways.

The Council are also seeking to encourage partners, such as Network Rail, to ensure these lands are actively managed to ensure they help support the biodiversity of the area as a whole and work together to improve the missing green habitat link

WHGARA, the residents association for the area south of the site, has contacted Camden to see whether a stay of execution might be granted so that not all the trees are lost. After all, it points out, although the new development will have some green space (see map below, click for large version), the vast majority of this will not be of much benefit to non-residents, or even visible to them.

There will be a number of trees planted as part of the redevelopment proposals and a number of other biodiversity enhancements such as living roofs and new landscaping. The overall balance of tree and other planting was considered and accepted … as part of the planning permission.

To me that reads like a “we’re not even going to look into this” answer, and I suppose the argument is that this was all in the public domain first time around and was passed so what’s the point.

This leaves the tree defenders with one (not tree lined) avenue left – appeal directly to Ballymore to retain those five trees that its own survey said have the “potential to grow significantly” and do not need to be removed. Failing that, at least Ballymore will know that locals will be carefully matching up the trees that are eventually planted with those that appear on the map to make sure there’s no shortfall.