You are here: Home / News / Halloween 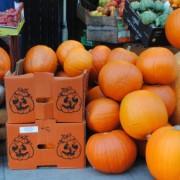 ‘Tis the season to be… scary, so here’s a roundup of Halloween happenings in West Hampstead.

First you’re going to have to get a tasteful costume sorted in time for Friday. Party Party on Kilburn High Road or Oscar’s Den on Abbey Road are your friends here. And if you go to Oscar’s Den on Friday or Saturday, staff are offering free face painting if you quote “SCARY” (this may be more aimed at young trick-or-treaters though).

The next task on your list must surely be pumpkin carving, and where better to find a good specimen than West Hampstead Fruit and Veg?

In terms of going out, Mexican restaurant Mamacita is celebrating Day of the Dead all week with a special cocktail and food menu – details on its website.

The Black Lion on West End Lane is opening until late on the 31st and promises “all things unholy” including Halloween-themed ales.

The Alice House of Horrors party is on Saturday November 1st, and fancy dress is, er, strongly encouraged. “Those not in costume will suffer an unspeakable fate” apparently. There’s a prize for the best costume and a DJ from 9pm.

Also on West End Lane, La Brocca is offering “tricks and treats all night” on Friday, and a DJ from 11pm.

Over on Kilburn High Road, nightclub Love & Liquor is putting on a night of surprises at its “Rehab”-themed night on both Friday and Saturday until 3.30am. Entry is £20, and a costume is required. Find full details on the Facebook page.

If you were planning to go to The Gallery‘s Halloween party on Friday, unfortunately it’s been cancelled. Refurbishment work in the bar has overrun, so it will now re-open on November 5th.

Finally, if you want to avoid the trick-or-treaters with a spooky night at the cinema, keep an eye on the film listings page (updated Thursday) for local horror highlights. And of course don’t forget WHalloween Food Fest on Thursday night.

Halloween time again. An excuse to dig out the facepaints and get your goth on, or to hide indoors munching a large slice of pumpkin pie. The choice is yours (Mmm… pie).

What are your options this year for spooky revels? Surprise surprise, The Gallery and The Alice House once again lead the way with their Halloween parties. The Alice House’s kicks off at 7pm on Saturday and runs through to 1am with a DJ. There are prizes for the best costumes (1st prize – dinner for two, 2nd prize – bottle of bubbly [does that mean not champagne?], and the best dressed group wins a round of shots). 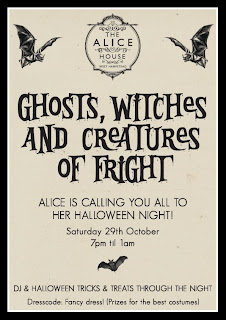 Over at The Gallery, well, it’s much the same. No DJ, but the bar’s open until 2am, which is confusing because the clocks go back at 2am on Sunday morning, so does that mean an extra hour of drinking? Fancy dress is still encouraged (although when I walked past last year, most people seemed to just be wearing black). 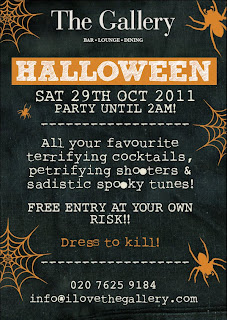 The Priory Tavern has a pumpkin carving competition on Saturday from 3-6pm (max 15 entrants/teams). The regulars will vote on the winners (which is a scary prospect in itself), who’ll be announced on Bonfire Night and will win a decent bottle of red wine. The popular 12 Bars blues band are playing Saturday night and on Halloween itself it’s the usual 2-for-1 on house cocktails on “Happy Mondays” (seem to have missed the point of Halloween there!)

Over in Kilburn, the North London Tavern has a Halloween Horror night finishing at 1am. Prizes for the best dressed, ghostly drinks specials all night, and apparently tricks and treats!

The Railway is your Halloween antidote – it’s decided not to do anything special this year, so if you want to escape the slime-coloured shots and zombie-clad wannabes, this is the place for you on Saturday night.

The Good Ship prides itself on not overly pandering to or exploiting Hallmark holidays, but it likes to give a nod to Halloween, so on Saturday night, there’s an evening of Halloween fun with a spooky short film and then four live acts from 8-11.30pm and of course DJs until 4am.

It won’t have escaped your notice that all this is happening on Saturday, which is NOT the 31st. Halloween itself is on Monday night and where better to spend it than laughing your little vampire socks off at The Good Ship comedy club, where host Ghouliet Stephens (don’t blame her for that, I came up with it all by myself) will be introducing a top night of comedy headlined by the outstanding Pappy’s (if you’ve not seen them, now’s your chance), and she’s claiming there might be pumpkin pie.

Have a fun weekend everyone – look out for our three local spooky tweeters @ghostontoast, @Ghoul_of_London and the deliciously strange @MarmiteGhost. And if you think it will make any difference whatsoever, here’s a poster the West Hampstead Safer Neighbourhood Team have circulated for those who aren’t in the Trick or Treat mood. 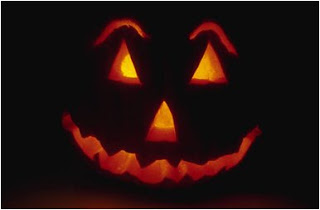 Halloween is around the corner, but these days it’s more of an excuse to smear black lipstick on the rim of a cocktail glass than to knock at your neighbour’s door in the vain hope of receiving some Haribo (or a tangerine if they’re middle class).

So, you’re in your best Morticia Addams or Freddie Kruger costume but don’t want to brave the scary beast that is the Jubilee Line. You need Halloween action, but you need it local. What are your options?

Last year, sister bars The Gallery and The Alice House sensibly had their Halloween parties on separate nights. This year, The Gallery takes the lead with two consecutive nights of ghoulish partying at Gothic Horror Halloween on Friday and Saturday. The bar is open ’til 2am and the flyer says “Dress to kill (literally)”, which we can only hope they don’t regret on Sunday morning. 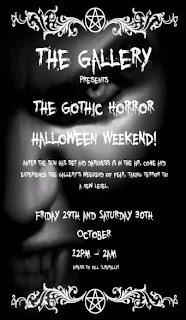 The Alice House meanwhile has a “Not so scary” Halloween theme on Friday and Saturday with prizes for best costumes. I’m not sure whether the prize is for the least scary costume…

DJ_Postscript will be pumpkin’ out the tunes (sorry, sorry) at The Railway on Saturday night from 8 ’til late, and The Lion also has a DJ lined up. A DJ too at the revamped Priory Tavern on Belsize Road, where they’ll be serving cauldron cocktails on Saturday, while on Sunday there’s face painting for kids and “devilish roasts”.

Head over to Kilburn and new kid on the block The Betsy Smith is hosting Fangtasia on Saturday from 7pm-3am. The blurb for this True Blood themed party says “be very nice to our vampire sheriff of the Kilburn district or punishments will be given!! People have been known to go missing….”. So, just an average night out in Kilburn then. 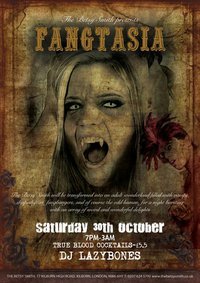 The Westbury has a Juicebox Halloween Party on Saturday from 8pm-3am. This night of “drinking, dancing and general tomfoolery” is free before 9pm, £3 from 9-10pm and £5 after 10pm. Or free at any time if you come in fancy dress. Although quite who decides what’s fancy dress and what’s just Lady Gaga popping in on her way back from Tesco Express is not clear. 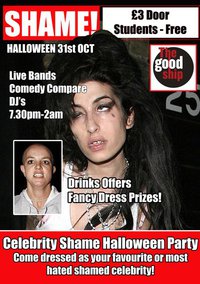 Whatever you’re up to, have a gorylicious Halloween, and remember the clocks go back at 2am Sunday morning, so you’ll get an extra witching hour this year.