Ever since Montefiore closed some three years ago, 351 West End Lane has struggled to deliver a good restaurant. Now, there are new owners and new impetus. Hana has been open a few months serving Persian food. The owners had a successful restaurant in Temple Fortune but wanted to try cracking the West Hampstead market. 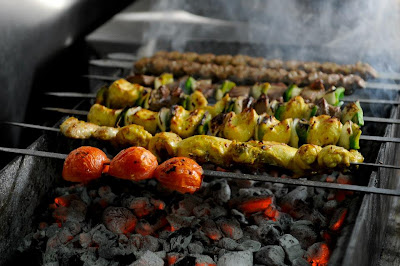 But is it any good? Only one way to find out – and meet a bunch of lovely locals at the same time. Come along to whampreview on February 21st.

What’s the deal?
We’re taking 24 people to Hana. Each table will get a selection of starters for £6/head, and then everyone can order their own main course. It is a meat-heavy main course menu, there’s one seafood main course and one vegetarian main – however, they are going to put an additional vegetarian main on for us so even if you’re not a meat eater there’ll be some choice, and most of the starters are vegetarian. Main courses vary from £8-13.

Whampreview basics
Dinner will be at 8pm and we’ll meet at The Black Lion on West End Lane for a drink from 7.15pm. During the evening, whoever is hosting your table (there’ll be three tables of eight people) will note down comments about the food/service/value etc., which will go into the write-up, but the evening is more about meeting people than being ultra-critical about restaurants. The bill is split equally between your table unless there’s been a large discrepancy in alcohol consumption. Any questions, just ask.

To put your name in the hat, simply before 5pm February 6th with your mobile number. Whampreviews are always oversubscribed, so I draw the names out of a hat and will contact everyone with a “yes” or “no” on the 7th.

The headmasterly bit
Please don’t commit on the offchance you might be free. Once I contact you to say you’re in, please check your diary and lock it in. Chasing round to fill last minute cancellations is, to be blunt, a pain in the arse that I could do without. I appreciate that sometimes people do need to cancel for a good reason – obviously the more notice you can give me the better.

On a chilly evening, I was grateful to be invited along with Jonathan to try outHana, the new Persian restaurant at the West End Green side of town. The venue has gone through a series of changes over the last few years, and the latest incarnation is thankfully quite different to Le Petit Coin, our second ever #whampreview destination some three years ago.

Happily, the neat, clean, nicely-lit room was warm; at this time of year it’s really awkward when you walk into a restaurant, then realise it’s freezing cold and quickly have to decide whether to make an about-turn or not. (There is one method I personally recommend to help warm up: try The Black Lion’s mulled wine as I did on this occasion – it’s fantastic).

Having been warmly welcomed by the delightful duo of manageress Alicia, and her very able waitress Pamela, we were guided through the menu. As usual, I was distracted by the wine list and took little in. Starting off with four dips, I was pleased to be warned that the hummus contained a lot of garlic. As @Sparklegirl21 correctly tweeted recently, there’s no such thing as too much garlic. Predictably, this was our favourite, but all four were good, one with spinach, another with cold chicken, and a warm aubergine dip.

The dips came with very thin flatbreads coated in sesame seeds. This thinness allowed them to be devoured without eating too much before mains arrived. When they did, they were well presented and immediately appetising. Jonathan noted that his enjoyable Ghafgazi mixed skewer (£12) – chunky cuts of marinated lamb fillet and chicken – arrived well-grilled, and I thought it had an elegant simplicity to it, with its colourful grilled tomato and perfect saffron rice.

I was drawn towards the Khorosheth Gheymeh, invitingly priced at £7.95. This stew of diced lamb in tomato sauce, split peas and sun-dried limes, topped with finely cut potato chips and rice (I took up the option of adding aubergine for £1), was delicious, and perfect for an icy-cold evening – though I don’t recall the chips being present for some reason! The various elements were warming and blended very well together; well-seasoned, with sweetness, sourness, and a healthy dose of cinnamon. The lamb was tender and flavoursome, and all in all this was an uplifting dish, cheerfully served in an authentic little pot. It’s a dish I’d like to have again. Our wine, a Tempranillo, also proved a sound choice.

Some excellent saffron ice cream arrived, accompanied by another plate that is a little hard to explain – a sort of sponge-pancake hybrid wrapped around a soft, sweet, creamy centre, which was quite enjoyable. Having recently mocked me for buying myself some Thornton’s chocolates to enjoy one night, Jonathan now seemed to find it gleefully amusing when I likened our dessert to that traditional family favourite, Arctic Roll!

Hana is something different for West Hampstead. It offers good value, and is only round the corner from plenty of other popular haunts – so I hope plenty of people will make the effort to get along there. Expect smiling, enthusiastic service, and a well thought-out menu that also includes some great-sounding seafood options by the way.

I suggest using the current bone-numbing weather as a very good reason to try Hana, enjoy interesting food in a nice environment, and reminisce about Arctic Roll. And if you’re still cold when you leave, pop in to The Black Lion for that piping hot mulled wine.

Happy Christmas, diners – the Port and cheeseboard are not far off now! My advice is to eat, drink, and be merry – and then repeat several times. Cheers!