You are here: Home / News / jubilee 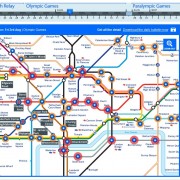 I’ve had my whinge about TfL’s model not showing West Hampstead as a hotspot. Now for some more practical advice about travel during the Games. If you are going to an event, I’m sure you’ve already worked out your strategy. I’d recommend the Overground to the Olympic Park, but the Javelin back from Stratford to Kings Cross and then tube or Thameslink home. It’s also less than a 3hr walk from West Hampstead to the stadium if you feel like the exercise.

Tube
The Jubilee Line will be exceptionally busy pretty much all the time and is, frankly, going to be best avoided if possible. It’s estimated that 80 percent of all spectators attending Greater London venues will travel by rail, including the Tube.

“Busiest Section: Bond Street to Stratford
Most affected: Weekdays 7-9.30am eastbound and 4-7.30pm both directions, and from 10pm until last train
Other stations on the Jubilee Line will also be busier than usual at certain times.

As always, GAOTG directs you to its funky hotspot map, with a slider so you can see where the busiest stations will be on each day of the Olympic and Paralympic Games.

Services will generally start between 5-5.30am, but on Sundays they will start 30-45 minutes earlier than usual, at around 6.30am. This will vary by line and station.

The Tube and DLR will run around 60 minutes later than normal on all days. Last trains from central London will leave around 1.30am.

There’ll be extra evening services on the Jubilee, Central and District lines and more trains running in the late evening from Friday 3 August, when events start at the Olympic Stadium.

On certain days and at certain times of day during the Games, some stations will operate differently. Measures may include entry or exit only at some stations, one-way movement within the station or station closures at stations where capacity is not high enough to deal with the demand. These changes will be signed within the affected stations in advance.

On the Bakerloo, expect a lot more people especially when Wembley is in use. Baker Street station will inevitably be very busy as a major interchange.

The Met Line will also be exceptionally busy when Wembley is in use, and Finchley Road is another hotspot station.

Overground
Despite being a direct route to the Olympic Park, our stretch of the Overground has not been singled out as being a major bottleneck, although it will – like everywhere else – be busier than normal. Highbury & Islington in particular will be a busy interchange station.
Buses
Buses will run more frequently on many routes to cater for the additional passengers. However, some bus services will need to be temporarily diverted and some stops moved or suspended as a result of the road changes that will be in place.

Thankfully, our local bus routes are barely affected. The good ol’ C11 doesn’t even get a mention in TfL’s 86-page bus route report. The archery at Lords shouldn’t affect the 139, although it is likely to be slow going down Abbey Road/Lisson Grove, as it is when there’s a test match on. The 139 and 189 will also be allowed to turn right off Oxford Street onto Portman Square even though that little stretch is a Games Vehicles only route.

139: On Sunday 5th and Sunday 12th August, and Sunday 9th September, the 139 will terminate at Haymarket because of the marathons. This will be in place until Trafalgar Square reopens.

328: During the men’s and women’s road race (July 28th and 29th), the southbound 328 will terminate at the top of Earl’s Court Road, just off Kensington High Street. This will be in effect all day apparently. Initially, there had been plans to increase the frequency of the 328 generally to service Earls Court, but this is now believed to be unnecessary.

Those of you who head up the Finchley Road, take note of two changes
113: At Marble Arch, the last stop and stand will be on Orchard Street as the Cumberland Gate bus stand will not be available from 20 July-15 August inclusive.

N113: Restrictions on Whitehall require amendments to out of service turning movements. From Cockspur Street, buses will run via Whitehall and Whitehall Place to stand on Northumberland Avenue and will return directly to Cockspur Street and the line of route. Expected to apply 20 July-15 August inclusive

Rail
National Rail services from London will operate later than normal. Last trains to locations within two to three hours of London will typically leave between midnight and 01:00. National Rail will also run longer and/or more frequent trains to and from most venue stations when events are taking place. Remember that Kings Cross St Pancras will be exceptionally busy as that’s where the Javelin trains to Stratford run to/from, and this will be one of the major routes people take to the Olympic Park. Expect lengthy queues.

Trains already run throughout the night from Sunday to Friday on the Thameslink route so we have lengthened 34 of these per week out of London and added one new service on a Saturday night to get people home.

We have ramped up train fleet maintenance at our depots to provide the extra services and we have cancelled all driver-training during the 2012 Games. We have special plans for the busiest stations we manage where there may be queueing systems. We’ll have over 1,000 additional shifts for customer facing roles. We have also increased our cleaning contract by 175 hours a day.

Oyster users will be charged only the minimum fare if they can’t touch out because of altered station arrangements.

Below are the estimated busy/very busy/extremely busy predictions for Thameslink trains in and out of London (click for full size).

Roads
The Olympic Route Network doesn’t really affect us very much. Obviously any attempt to drive into central London means running into issues, but in our bit of NW London, the only issues are around Lords and Wembley, and in neither case is there anything too drastic to worry about. The ORN comes into place on Wednesday and runs right through to August 14th. Normal traffic can use the vast majority of the ORN, although there will be temporary changes such as suspended turns, stopping and loading restrictions, and traffic signal timing alterations. Stopping or parking on the ORN will result in a £130 penalty charge and your vehicle may be towed away.

These two maps and a reasonably good video give you some idea of what to expect.

Bikes
Cycling around London may well be one of the best ways of getting around. Just one thing to note though – many of the central London Boris Bike hire stands will be suspended during the Games.
And finally…
A few stats from TfL on what London is going to be coping with (and a pretty map showing numbers of spectators on Sunday August 5th)

Up to one million extra visitors are expected in London every day during the Games. They will make an additional three million journeys, over and above the regular 12 million journeys made on public transport

During each of the 16 days of the 2012 Games, London will be transport an average of 500,000 spectators and around 55,000 members of the Games Family each day, including athletes and team officials, technical officials, press and broadcasting teams, Olympic and Paralympic families, and marketing partners.

We have a long weekend. Four whole days of it! It’s like we’re in continental Europe or something. And why have we had this bestowed upon us? Because the Queen’s been Defending the Faith longer than Jamie Carragher, that’s why.

Is anything happening in West Hampstead to celebrate E II R’s lengthy Game of Thrones, I hear you ask. Why yes, yes it is. There are a few local events, so I thought I’d better put them online for you. I’ve heard rumour of other odd street parties, but don’t have the details – do please feel free to add your local events (Kilburn and West Hampstead only please) in the comments section at the bottom.

If you’re into drinking and live music more than cucumber sandwiches and bunting – but still want to capture that Jubilee vibe then you’ll want to spend your evenings at The Alliance’s Coronation Weekend Party. On Saturday, Sunday AND Monday, there are a series of free gigs. On Saturday, Boz Boorer (who some of you will know plays with Morrissey) will be DJing and there’ll be a “very Special Guest Star” live on stage!

More live music on Sunday with Florence Joelle and her band from 8pm and on Monday, Carlos and the Memphis Flashers are playing. Lyn Boorer hosts the weekend and there’s a Jubilee style menu over all three days. And it’s free. Did I mention it was free?

More traditionally… On Saturday afternoon, West End Green (that’s the small one up near the fire station, some people always ask) will host the W.HEART Jubilee Lunch. You actually bring your own lunch, but there’s entertainment planned all afternoon and Camden’s new mayor will be there at about 2.30pm. 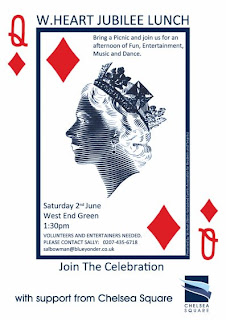 Also on Saturday, the Fordwych Residents Association is holding a Jubilee celebration in St Cuthbert’s Church (just south of Mill Lane) from 2-5pm. There’ll be stalls, light refreshments and “High Tea” at 3pm. 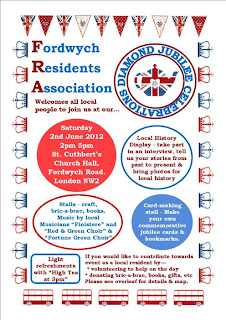 On Sunday, the Friends of Fortune Green are holding a Jubilee Big Lunch starting at midday. They provide sausages, soft drinks, plates, cups, napkins, bunting, entertainment and children’s activities including a magician and a project to build a cardboard Windsor Castle (flammable stuff, cardboard – just saying). You provide: yourselves and a dish to share, savoury or sweet. Please label your dish so people know what they are eating. If you want to make a cake bring it along and it will be entered for the Fortune Green bake-off. They’re also asking if people could bring along a big teapot if possible. Presumably for some nursery rhyme reenactment… or for tea. Definitely one or the other. If it rains, the event will be in the playcentre at the north end of the Green.

The FoFG have a good track record of Big Lunches. Last year they held a Big Lunch to celebrate the improvements to Fortune Green and over 200 local residents joined in.

On Monday, why not take a break from bunting waving and head to The Good Ship in Kilburn for the first of the Edinburgh preview shows. £4 if you reserve (yes, just four pounds) or a fiver on the door to see Fran Moulds, James Acaster and Johnny & The Baptists. So, to recap. Three previews of shows that will be at the Edinburgh Fringe where you’d pay full price for EACH ONE. Instead you can see all of them here for £4. There’s also a raffle, the bar stays open late, and the excellent Ammis Curry is even on hand to keep your appetite sated through the night.

On Tuesday, the Lymington Road Residents Association are hosting a Jubilee Party that starts at 12.30. There will be numerous stalls serving a variety of hot food, cakes and drinks, a bouncy castle, face painting, a live band and more. The event will take place both on Lymington Road and in the LRRA Hall at 1 Dresden Close.

At the same time, Alexandra & Ainsworth Tenants & Residents Association is holding a Jubilee Picnic from 12-4pm in the park with Punch and Judy (aka Phil and Liz, surely?) and a football tournament. 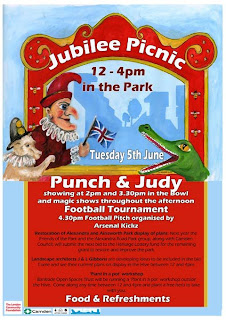