Tag Archive for: The Blues Brothers

You are here: Home / News / The Blues Brothers 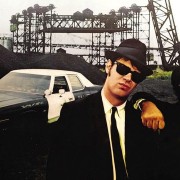 Yes! Sanity prevailed. The people spoke (well, 186 of them did) and the overwhelming winner in the vote for August 31st’s Film on Fortune Green is The Blues Brothers.

This classic musical comedy from 1980 stars Dan Aykroyd and John Belushi and was directed by John Landis. It features cameos from some of America’s musical legends – most famously Aretha Franklin, Ray Charles and James Brown. It also has one of the best (and longest) car chase sequences of all time and spawned a thousand tribute bands, imitators and wannabes.

It’s 106 miles to Chicago, we got a full tank of gas, half a pack of cigarettes, it’s dark… and we’re wearing sunglasses.

The film starts at 7.45pm, and will once again be bike-powered (volunteers are very welcome indeed), but come earlier to grab a good spot and bring a picnic. It is a 15 certificate, though that’s really for a few swear words (always in context, of course) rather than anything more disturbing for younger kids. It’s really a glorified cartoon – and brilliant for it.

These film nights are getting more and more popular and this one should be even better. Bring your dark glasses and thin black ties and lets get our whampblues on.