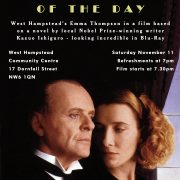 So what’s happening in West Hampstead this month? Lots of course!

A couple of days later on Monday 20th Locally Sourced at the new venue of the Alliance have Pauline Prior Pitt (poet) and Luke Barlow, jazz pianist.

The Camden Arts Centre continues it’s reputation of showing established if slightly under the radar artists. At the moment they have Natalie du Pasquier with ‘Open Rooms’. She was part of the Memphis group in the 80s and talks about the exhibition in this video. Also on show is a smaller exhibition by Christian Nyampeta (a former artist in residence).

If all this is getting a bit heavy… how about something a bit lighter?

Sadly the Good Ship comedy has sailed over to a new venue, but it’s not far just a short trip on the Overground to upstairs at the Colonel Fawcett in Camden Road. Still on Monday nights.

Or closer to home the London Improv on the Finchley Road has a few things on offer. On friday 10th it has the Ultimate Improve Friday with the Inflatables (improv comedy) AND Musicbox (improv comedy musical). Of Tony Slattery is back with Slattery Night Fever (err nest on on Monday 6th), but back on Saturday 18th and 25th. He has some old stalwarts of the Improv scene joining him.

Or if you are feeling a bit braver… a week later there is a mid-winter swim over at Hampstead Lido on Saturday 25th. It is raising money for Crisis the homeless charity.

And a definite date for your diary… Thursday 30th Whampdrinks at the Gallery.

There are some really special presents on offer at the Village Haberdashery who have organised Makers Markets – every Sunday until the 17th of December they have two visiting makers selling their wares. And they also have some Christmas classes coming up.

Another date for your diary is Kingsgate Workshop’s Winter Fair on Friday 24th (evening) plus Saturday 25th and Sunday 26th (afternoons). They’ve got music too! It’s not quite as big as the summer opening but there are some great designer-maker present to buy.

And finally, just slipping into next month, on Saturday 2nd December, it’s the West Hampstead Christmas market on West End Green with some more hand-made present buying opportunities – and carol singers too!

(Also in December is the next FoWHL event – an evening with Sir Derek Jacobi. But alas – blink as you missed it – it is booked out already).