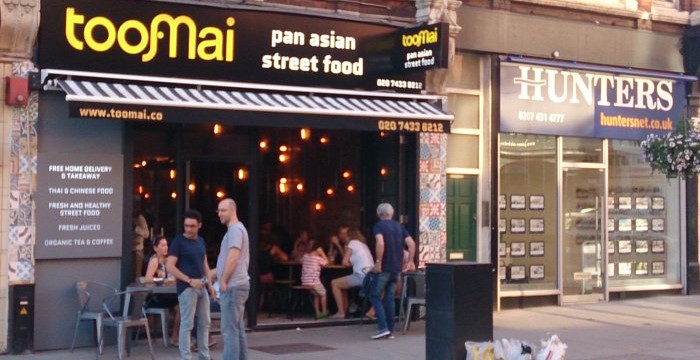 Burglars broke into pan-Asian restaurant Toomai on Sunday night, making off with the weekend’s cash takings and causing damage to the premises.

Sachin Mulane, proprietor of the West End Lane restaurant, said that the intruders had entered the building by climbing onto the roof and breaking a window to gain access to the kitchen at the back. Guglee, also co-owned by Sachin, was broken into earlier this year.

Although they were unable to open the locked till, they took envelopes of cash from the basement office, as well as five bottles of champagne and, bizarrely, a bag of prawns that had been left out to thaw. A cash collection towards a staff Christmas party was also taken.

Worse than the missing cash, Sachin said, was the chaos and vandalism he discovered throughout the premises. Electronic point-of-sale equipment was damaged, and the kitchen’s order printer destroyed. Food in the kitchen that had been prepared in advance had to be discarded in case it had been tampered with. The thieves had even tried to remove the large TV screen in the front window, but were unable to wrench it off its metal pole.

Despite the setbacks, Toomai was open as usual for lunch on Monday.