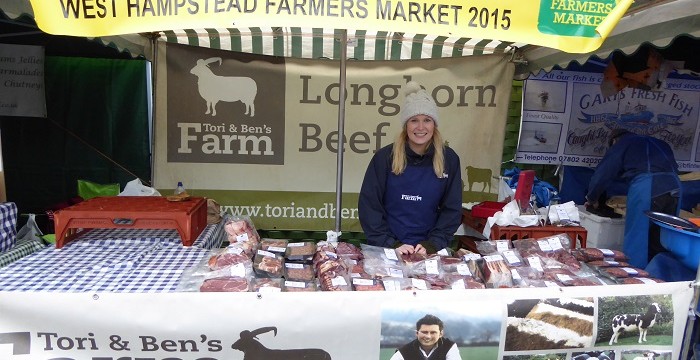 Last Saturday, Tori & Ben’s Farm was awarded this year’s prize for “Customers’ Favourite Stall” at the West Hampstead Farmers’ Market. The stall sells lamb and Longhorn beef from their farm on the Derbyshire / Leicestershire borders. 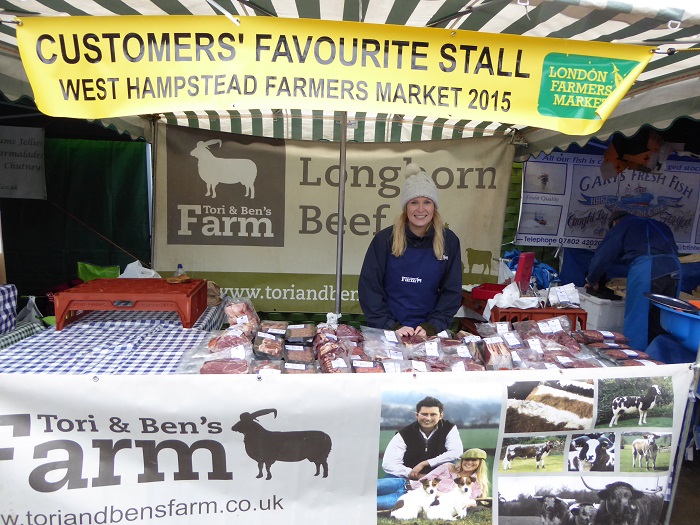 The runner-up was last year’s winner, Brinkworth Dairy, which sells milk and cream at its stall, as well as takeaway coffee, to a steady queue of customers each week.

It’s good news for the stallholders, but latest statistics show that customer numbers have dropped since the market opened on the Thameslink forecourt in 2012. In its first year, the average footfall at the market was 3,558, but by 2014 the average had fallen to 2,477.

In an effort to boost customer numbers and raise awareness, London Farmers’ Markets, the organisation behind West Hampstead’s Saturday market, has applied to Camden for planning permission for its promotional banner to be placed between the trees on the Thameslink forecourt for a period of six months. There have so far been nine objections to this proposal, with some residents criticising the “unsightly” proposed banner, but Camden has received many more messages in support of the banner, 56 in total, including one from the West Hampstead NDF committee.

Cheryl Cohen, of London Farmers’ Markets, explains the need for a banner in the covering letter to the application, stating that it is “necessary to draw the farmers’ market to the attention of those who may not know that it exists,” in an area with a high turnover of residents. Why this method of advertising? From a survey carried out at the market, “47% of people said that they had found out about the market via the banner.”

Abi, who was manning Tori and Ben’s stall on Saturday, said that they had noticed a slight “six-month slump” in customer numbers, but that things seemed to be picking up again. She said it was still very much worth the trip to West Hampstead each week, due to the stall’s many loyal customers who return to buy their meat each Saturday.

What could explain the drop in footfall at the market? The shopping landscape of West Hampstead has changed since 2012. In the past twelve months, West End Lane has had new shops open selling fresh, good-quality produce. West Hampstead Fruit & Vegetables is always busy, and open late every evening. The Hampstead Butcher & Providore has a wide range of good-quality meat, Cook! sells freshly-cooked convenience food, and how could we forget the new Waitrose opening?

What do you think – are you loyal to the farmers’ market, an occasional customer, or do you use other shops or supermarkets? And do you support the organisers’ proposal for a banner to help restore customer footfall? Comment below or join the discussion on the Forum.