This past week West Hampstead has been hit by one water mains leak after another. The first was in Fawley Road where one man fought a valiant fight to get it sorted.

Others appeared in Achilles Road, Fortune Green Road and West End Lane. They were particularly treacherous when it was icy. Thames Water is sorting them out – eventually. Doesn’t the council have some responsibility to notify Thames?

Tulip’s Brexit Exit: our MP, Tulip Siddiq stood down from the opposition front bench so she can vote against the government’s Brexit bill this week. Jeremy Corbyn confirmed on the radio that shadow ministers couldn’t defy the three-line whip (but oh-the-irony that he voted against his party 535 times in the last twenty years). 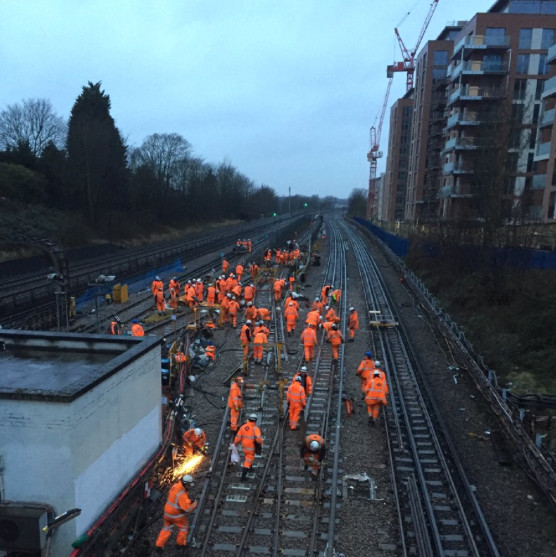 Renewals work on the Jubilee line. Image via @jubileeline

WHL got another Insight into a local business; this time Rock Men’s Salon and Wired Co. coffee on Broadhurst Gardens. Why two businesses? They are run by the same guy.

156 West End Lane (aka Travis Perkins) is going to planning committee this week. The officer recommends approval.  If you want to refresh yourself about the development, A2Dominion’s website has a summary.

Camden says 50% of residential floorspace at 156 is defined as affordable; yet 35 of the 79 ‘affordable’ flats are shared ownership.  Last week we discovered that to buy a one-bed shared-ownership flat in nearby Iverson Road would require an income of over £65,000 (putting purchasers in the top 10% of taxpayers). Affordable?

There is a planning application for a 15 metre mobile phone mast on Blackburn Road.

SALT (formerly Lower Ground Bar) was back before Camden’s Licensing Panel as the police are still concerned about (alleged) drug-taking and violence at the venue.

West Hampstead politics is hotting up…

The Conservatives have announced their candidates for next year’s local elections. Several old hands standing down and lots of new faces.

And the candidate for Kilburn is that ‘ordinary member of the public’ who made a deputation to the council about waste on West End Lane (but err who works as a Tory parliamentary researcher).

There was a very interesting internal Labour Party report about its prospects for those elections; West Hampstead and Fortune Green are ‘true marginals’ and Kilburn a ‘firewall’. Labour is concerned that the introduction of fortnightly waste removal will be a key issue.

Nothing from the Lib Dems yet though. They have been rather quiet of late.

He’s an accountant, not a spy. Although her appeal was turned down, it appears that one of the charges against Nazanin Zaghari-Ratcliffe, the West Hampstead mother being held in Tehran’s Evin prison is that she is married to a British spy. He isn’t, he’s an accountant.

The shape of things to come 1. If you aren’t feeling well over the next three months and call NHS 111 you will be diagnosed by an app! Camden and Islington NHS Trust is trialling ‘Babylon’, a medical diagnosis app. Claims to be more accurate than a real-life doctor.

The shape of things to come 2. The new Camden and Islington Police Chief revealed at a meeting on Thursday that Camden may trial drones to help policing.

The Jester Festival is under threat. It needs new committee members to keep it going. If you’re ready to step up to the plate for West Hampstead contact

I am first and foremost a constituency MP. Here's why I'll vote against Article 50: https://t.co/bep46wOzvB