Tulip Siddiq MP romped home with a clear victory in Hampstead & Kilburn, getting 34,646 votes and more than half of all votes. That was a margin of 15,560 over her Conservative opponent Claire-Louise Leyland. There was a swing to Labour of 14.6%, which transformed Tulip’s slim margin of 1,138 seats in 2015. Far from being a squeaky tight seat as many predicted, H&K is – for the moment at least – a Labour stronghold. 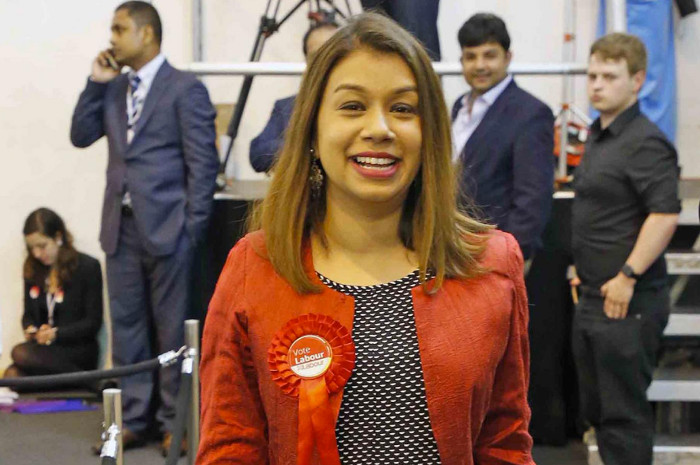 And the winner is … Tulip Siddiq M.P. Image credit @betterforbritain

Conservatives’ share of the vote fell 10%. Kirsty Allan of one-time challengers the Lib Dems got 4,100 votes (up 1.4%) while John Mansook of the Greens got 742 (down 3.2%). The two independent candidates couldn’t muster 200 votes between them. UKIP had not stood, and it was their voters going to the Conservatives that was Tulip’s biggest fear. In the end, she had no need to worry.

Tulip was clearly helped by the strong Labour boat, captained by Jeremy Corbyn, but H&K voters also seem to have responded to her focus on her local record and no doubt the very high intensity campaign that her local supporters were able to muster at short notice.

Her strong anti-Brexit stance must also have played a role, and may well have been a key driver of the drop in the Tory vote. One theory doing the rounds at the count was that remainer Tories were voting Lib Dem, but if true, then other Lib Dem voters must have switched to Labour perhaps to keep the Tories out rather than due to a change of ideology, as the Lib Dem overall share of votes remained about the same.

Did the drive to sign up young people have an effect in Hampstead & Kilburn. It probably helped. An additional 2,779 voters signed up to vote (though age is unknown), taking the total electorate to just shy of 83,000. Turnout on the day was higher than the national average, rising 3 percentage points to 70.4% (which translated to 4,443 extra votes compared to 2015).

What of our neighbours? In Camden’s other constituency, Labour’s Sir Keir Starmer stormed home with a majority in excess of 30,000. In H&K’s neighbouring Brent seat, Brent Central, Labour’s Dawn Butler was also a convincing winner with a 28,000 majority. Looking south, Karen Buck – also Labour – was in a similar position to Tulip, defending a small majority and with the threat of a strong Tory challenge. She too ended up coming home safely with an 11,500 majority. 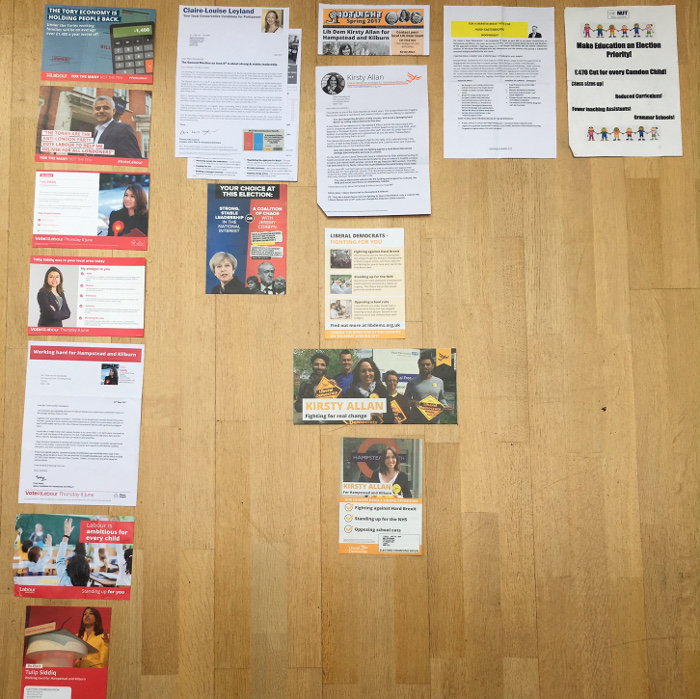 All those election leaflets, now we need to recycle them (… or just reuse them for the rumoured next GE?)

Labour’s only local disappointment, and the only glimmer of hope for the Conservatives in our part of the capital was to the north in Finchley and Golders Green, Conservative Mike Freer was re-elected, though his majority was only just over 1,500. It was a similar picture further north still, where local boy Mike Katz – former Labour councillor for Kilburn before his controversial deselection – looked like he was in with a good shot of taking Hendon. In another very tight race, the rising Labour tide wasn’t quite enough for Mike who fell just under 1,000 votes short of unseating Conservative Matthew Offord. One feels Mike’s time will come.

What does any of this mean – well, no great change locally for now, but brace yourselves for another trip to the polling booths before too long in the next round of “Tulip takes on allcomers”.

What have you missed since June 5th?