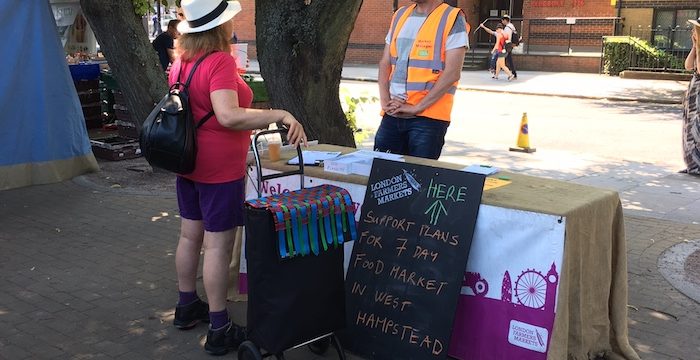 London Farmers’ Markets has applied to Camden Council to expand the operating hours of the market that currently pops up on Iverson Road every Saturday. The existing market is popular, so this initially seems like a good idea and LFM has made it very easy for locals to show their support. However, residents who’ve looked at the smallprint have some reservations, and it is far from clear whether the demand is actually there. 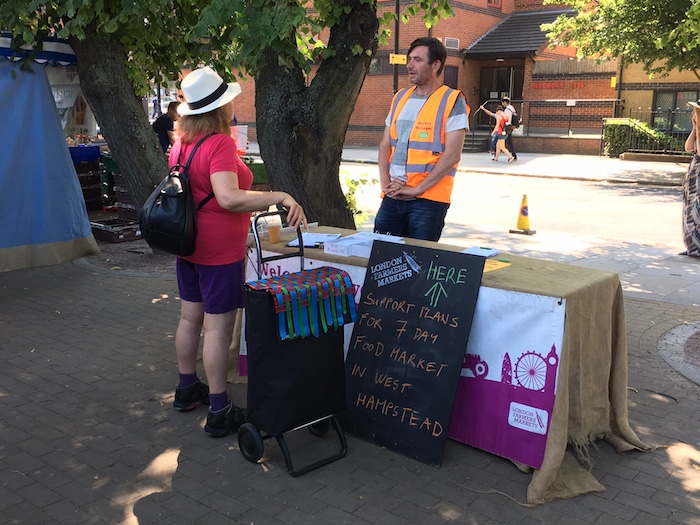 We love the farmer’s market, but is expansion from 4 to a potential 82 hours a week too much, too soon?

For years, the residents of West Hampstead clamoured for a farmers’ market, and their wish came true five years ago. Pretty much from the word go it’s been a success, as our Insight into: Brinkworth Dairy explained.

To build on this success, London Farmers’ Markets – the company that puts on not just the West Hampstead market, but most of the major once-a-week markets around the capital, including Queens Park’s Sunday market – has put in a planning application to expand the hours of operation. On Saturday, the market would potentially run until 8pm, rather than 2pm as it is now. There could be a Sunday market from 10am to 5pm and on Mondays to Fridays it is asking for permission to trade from 7am to 8pm. Add it all up and it’s a potential expansion from 4 to 82 hours a week.

Local residents in Maygrove and Iverson Road, who already are under severe parking ‘stress’ are obviously concerned about the impact on parking, and there are also concerns about rush-hour passenger and traffic flows.

Nor does it seem that the traders themselves are unanimously in favour. Many of the regular stallholders have to drive a couple of hours to get here, which would mean 5am starts (or earlier) if they were to be opening for busines at 7am (not allowing for setup time). Once they finish and pack up there’s another two hour drive home – or more in the afternoon traffic. If the Saturday market didn’t close until 8pm they wouldn’t be home until 11pm, having got up at 5am. And then get up the next day at 5am for the next farmers market? All seems rather implausible.

Other locals have raised concerns about the impact on our local greengrocers, butchers and cafés? Businesses at the farmer’s market don’t have to pay the high rent or rates that businesses with premises have to face, so would this amount to unfair competition.

LFM says that the mid-week market would be a different animal to the weekend market. There would be fewer stalls and more food outlets. But this has been tried before, admittedly not by LFM, and was not a great success given the lack of footfall. As we all know, West Hampstead is a busy interchange so there are morning and evening rush hours but not much in-between. Traders who were involved with that market thought that, if at all, just running it on Thursday and Friday night might be a better option.

It does rather feel as if LFM is attempting to get permission for as many hours as it possibly can, and will then work out when it will actually choose to trade, with the flexibility to adjust based on demand and the seasons. The idea of more than 80 hours of trading every week is surely unrealistic.

Even those with reservations – locals and traders – think that an expansion of the hours of trading is worth exploring -perhaps a market on Sunday with similar hours to Saturday but a slightly different focus. During the week perhaps one evening to test the market. In essence let’s not kill the farmer’s market goose that lays the organic golden egg.

Planners at Camden Council are reviewing the application and have acknowledged support for it. However, they are also considering the impact on neighbourhood amenity, local traffic and highway safety plus implications for the viability of the town centre. If you want to comment, you have until the 6th of July and can do so here.

What have you missed since June 19th?

What have you missed since June 26th?