A rowdy local foursome set sail for Hidden Treasure last week – and had a typically quirky time in what’s known to be a very characterful restaurant. It’s an amusing, upbeat, slightly chaotic place, and there was a little issue with our table not being ready, or even in existence, solved by some Tetris-style furniture re-arranging from the friendly staff.

I liked my smoked salmon gnocchi in a pink sauce; the heavier, less ‘cheffy’ variant is fine for people like me with big appetites, and the flavours were big enough to keep me quiet for a while (about 5 minutes).

Two pasta dishes, one with prawns (which seemed excellent) and one with sausage, were very well-received, the sausage one requiring a ‘nosebag’ to take leftovers home in. (Recently noticed that the word ‘sausage’ contains ‘sage’ by the way – one of those strange moments of confused enlightenment I get on occasion – admittedly usually well into my second bottle of Malbec).

Not so convincing was a lobster dish that was insubstantial, accompanied by some less than pleasing fries. Such things matter; I had a brilliant seafood dish in The Akeman, Tring, last week, which included some divine hand-cut but slim-shaped fries. An eatery in West Hampstead, London, should surely be able to compete!

Side salads couldn’t match La Brocca’s, but ripe avocado was a plus, as were strips of carrot – adding a bit of crunch. Wine list a little short and priced in steep increments; we chose the house white which was refreshing and absolutely fine.

My dessert of dark chocolate tart was an absolute peach, though! (Not literally, obviously). A thick, firm layer of dark choc delight, with an equally thick, highly satisfying biscuit base. A generous portion, and all-round fantastic. I asked the waitress if she’d tried it, and she laughingly replied “oh, yes, yes” as if to say “what an incredibly stupid question!”

Overall, we perhaps didn’t discover the rarest of culinary gems, but we did have a jolly time which only left one of us all at sea, and I might well be tempted by their ‘best seller’, the seafood tagliatelle, in the not too distant future. 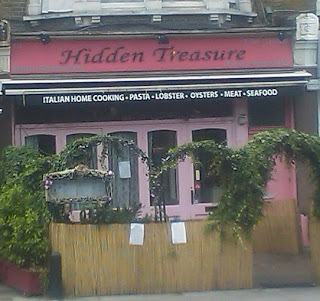 Had we been rumbled? An enormous cake appeared that looked at first glance to be made almost entirely of cream. We hadn’t ordered this. It wasn’t anyone’s birthday. Yet here was a cake and our lively Italian waiter who seemed to be managing the whole place by himself told us it was on the house.

That saved us ordering dessert I guess. Not that any of us were especially hungry. Hidden Treasure‘s seemingly infinite combinations of seafood and carbohydrate (mostly in pasta form) had satisfied our appetites. There are other things on the menu, although it’s hard to be sure that you’ve actually seen everything on offer – it was only when I was having coffee that someone mentioned the specials that were written on a tiny chalkboard above and behind me.

Navigating the main menu and its various inserts had taken us all long enough and with so much to choose from, the decision to share various antipasti along with a vitello tonnato was met with relief.

The Grande Antipasto of meats, olives, cheeses was certainly made for sharing, the bruschette looked good but for some reason never made it to my end of the table. The grilled mixed vegetables seemed like they’d been grilled some time ago and then marinated almost to the point of pickling. This is not to say that they didn’t taste good, but I don’t think it was what we were expecting. The vitello tonnato was disappointing, the sauce lacked flavour and was an odd consistency. I certainly didn’t want more than one mouthful of this dish that is sublime at its best.

Maybe we should have expected that for a place built around seafood the standout starter would be the clams. They were excellent – a very generous portion of sizeable juicy clams and the garlic and parsley sauce was perfect. Frankly a bowl of those and a glass of wine would have left me very happy. They were so good that Jess boldly tried her first ever clam and emerged unscathed.

We were drip-fed main courses which came out more or less one at a time, although feeding a party of 8 from what must be a small kitchen in a small restaurant is not easy. Indeed although the service was not the quickest, it was probably the most engaging and friendly we’ve had at any of the restaurant reviews.

Seafood was the theme of the day for most people. Simon bucked the trend with his chicken saltimbocca, while Matt pushed the boat out with the half-lobster special – a cunning dish that looked spectacular but wasn’t actually as big as it seemed at first glance. 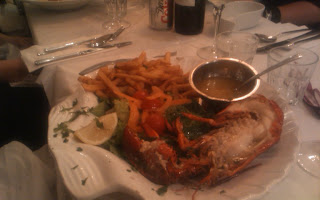 All the dishes were served on oversized fish and crustacea shaped plates, which adds to the slightly kitsch décor (there was talk of deducting points for the (fake) zebra skin that hangs on one wall). The plates were a talking point, but would have been more impressive if they’d been hot – mine at least was stone cold.

The wine (a white Pinot Grigio and a red Cabernet Franc) flowed, spaghetti, tagliatelle and linguine was twirled, gnocchi was.. er… forked and the shells of various molluscs were discarded. The visual impact of the dishes was great, and overall everyone was agreed that the taste was good too. There were of course minor quibbles: Andrea‘s risotto wasn’t quite unctuous enough, Sarah‘s seafood/spaghetti combo was on the oily side, and Matt’s garlic sauce “lacked zip”. But Tom‘s gnocchi dish had an unexpected depth of flavour and my own bowl of tagliatelle and seafood was only an extra squeeze of lemon, scattering of parsley, and perhaps sprinkle of chopped chilli away from perfection. 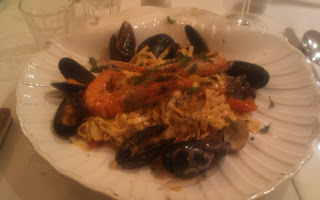 Jess’s variation on penne all’arrabbiata was “superb” but it was Sue who was by far the happiest. She confessed to having grown too accustomed to proper Italian home cooking while living there to always enjoy Italian restaurants here, but then proceeded to rave about her classic linguine alla vongole, praising its authenticity and simplicity, “and I loved the atmosphere and the owners” she added.

Hidden Treasure has had some mixed reviews, and some locals have vowed never to go there again. Maybe we got lucky, but none of the eight of us were disappointed and I think we would all add it to the list of places to frequent. It’s not the cheapest restaurant around, and the final bill was high partly thanks to the wine consumption (think we might need to be a bit more frugal at future reviews!). However, sitting out front on what the restaurant calls a garden (but the rest of us would call a terrace) with a £10 bowl of pasta and seafood would seem to be a very agreeable way to spend a warm summer evening on West End Lane.