Live coverage of Hemstal handgun drama
Crime was the big story of the week, following Tuesday’s gun drama on the streets of West Hampstead. Tweeting from the scene were @medcabnath (whose photo is below) and @2muchcoffeekate. 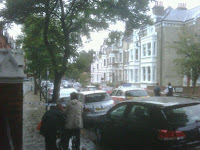 BBC Travel confirmed the road closure but, as the excitement wound down, residents still weren’t entirely sure what had happened. It wasn’t until later in the week that we got updates from BBC News, the Camden New Journal, and the Ham & High. 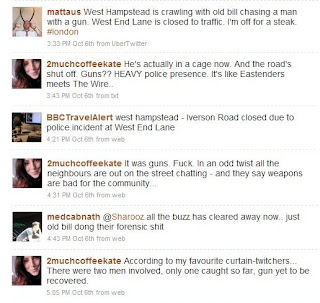 All the drama led to an exchange the next morning over the crime rate in West Hampstead. @WHConservatives said crime in the area was on the rise. When @Whampstead challenged this stance (which one person had criticized as “spreading fear“), the local Tories pointed out that burglary and theft from cars were both higher in West Hampstead than in neighbouring areas.

The Met’s statistics, available here, show that they are right. However, it seems misleading to suggest that West Hampstead is a “high-crime” area, relative to this part of London. This blog entry looks into the issue in more detail. The text of the police’s appeal is here.

Being the urbane bunch we are, not everyone was too fazed by the developments and quips about bulletproof vests for the commute home abounded. The pick of the bunch, however, was from @2muchcoffeeforkate, one of the on-site tweeters. #whampcrime

Of course the flooding was a problem for local businesses too, but not all handled it as well as some of you might have hoped for.

None of this is new, as this article from 2005 reminds us. Mind you, given that the word “Kilburn” derives from the name of the stream that runs beneath it (now the River Westbourne), flooding in these parts probably dates back to the days before there were even water mains to burst. #whamptravel

We’ve got the Ex-Factor
NW6 was left reeling by the news that X-Factor finalists are no longer housed in the area. They were here:

But no longer will they slurp their coffee in Caffé West as the news broke that the house this year is in Golders Green. @emma_marion used that terrible few hours when twitter froze to do some sleuthing.

Fans had already tracked down the property and there were photos in the press the next day of the place being beseiged by fans. The police now have to spend resources controlling people like this person who fruitlessly begged @WHampstead for the location. 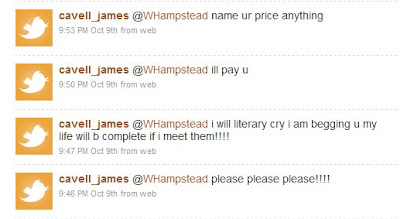 However, @KateTheIrish1 told us that contestants used to drink in the Railway. Perhaps the wannabees have come home to roost. #whexfactor

Whampgather in Whonderland
The Alice House is the venue for the first ever local tweetup, which takes place on Monday evening. With a competition and free drinks, it promises to be a social event to rival Henley or Ascot. See you all there.

New to the neighbourhood
It‘s not new to West Hampstead, but popular restaurant The Wet Fish Café is new to Twitter. You can keep up to date by following @TheWetFishCafe. #whampnew 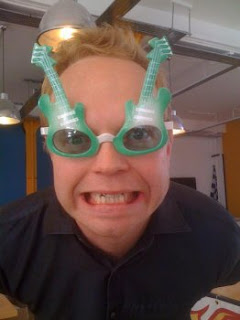 Calculating Criminals The morning after the night before