A few new faces on West End Lane, and a continuing mystery in Fortune Green.

Alexis the bakery up the north end of West End Lane has shut. To be replaced by… a bakery. But a bright orange bakery, if that makes any difference. There’s a Dylan’s already in Willesden (170 Church Rd), so presumably orange is a tried and tested formula. The West Hampstead one hasn’t opened yet, so no review but here’s a picture of it in all its orangeness. 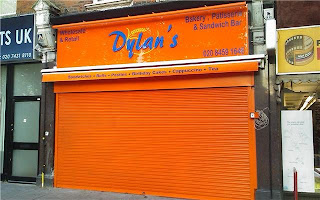 (by the way, the pharmacy next door looks like it’s closing down – it’s not, it’s just being refitted).

Further down towards the tube station, the unit that was X10 computers (a strange den of chipboards, cables and the owner’s aphorisms, which acted as some sort of test as to your worthiness as a customer) closed a few weeks ago. It has reopened as Matrix. Nice to see the “x” theme being carried through there. This one has nothing to do with motherboards and hard drives and everything to do with nails and extensions [CORRECTION: it appears to be just a hair salon, not a nail bar]. Perhaps it will make up for the nail bar that closed earlier in the year on Broadhurst Gardens. 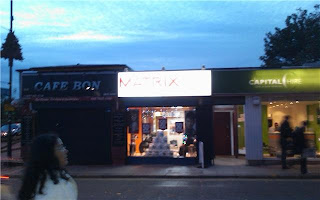 Regular readers will remember the Photo of the Week from Digest No.2. Here it is again to refresh your memories. 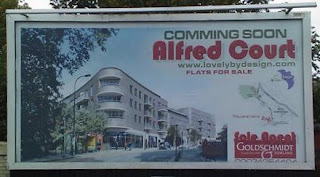 Of course, they couldn’t possibly leave such a huge billboard up with such a bad typo on it, so the board has been changed. 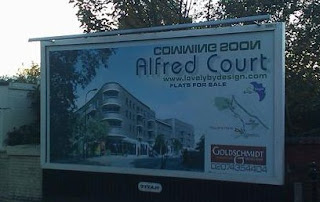 The friendly girls who work in that teeny-tiny branch of Goldschmidt & Howland next door gave me a wry smile when I asked about it. It’s going to be redone again apparently.

I was actually in their really very small space to try and solve the burning issue of the day: what is the retail space going to be in the very development advertised above. Rumours (some started by @bubela‘s local shopkeepers again) have been pinging around, and as G&H are selling the flats I thought they might know. They don’t. They did try and find out though and I spoke to Sam from their Hampstead sales office who explained that they weren’t responsible for the non-residential units and he couldn’t say for sure what would be there. The consensus in the office was that a gym/health club was pretty much a given. There was also talk that there might be some sort of mother/baby centre (whatever exactly that might be), and a shop. But what the shop was no-one seemed sure. Fear not, I’m still on the case and if I find anything out I shall let you know – and if you hear anything then do pass it on.

For what it’s worth, my hunch would be that something like a Spar is the most likley. I would be surprised if a Waitrose/M&S would move there as it lacks the footfall they need. Would Tesco’s really open somewhere quite so close to its Express store on West End Lane? And would Sainsbury’s open a Local quite so close to a Tesco Express? My money is on a Spar or another of the franchise operations, which can be half-way decent when they are in ok areas.

Finally, there’s the unit on West End Lane next to Starbucks that was Prime internet café and DVD/video rental. It’s been closed for a while and is being refitted at the moment. Place your bets for what will move in there. My guess is that it might stay empty for a little while. But I’ll try and find out when I get the chance.

West Hampstead Digest No.3 Local news where you set the agenda Newcommers [sic] update: New Katz on the block