Small & Beautiful is neither particularly small nor particularly beautiful. It is commonly described as ‘cheap and cheerful’, which seems a much more appropriate moniker.

On Thursday night only half the restaurant, which nestles against the Overground railway bridge on Kilburn High Road, was being used, but the place was buzzy when we arrived.

Menus came promptly. It is all ever so slightly confusing with starters, light bites that sound like entire meals (a lamb’s knuckle can surely never be a light bite?), main courses, and then a separate list of specials which overlapped mostly with dishes listed on a blackboard but not entirely.

Bread and olives were swiftly delivered – a generous amount of both – while we ordered a bottle of Chilean Cabernet Sauvignon (in honour of the miners you see) and attempted to order several different bottles of white before finding one they actually had in stock.

And so to the food – the menu is a strange mix of more interesting dishes such as chicken and artichoke salad, and pub grub staples such as potato skins. Matt and I opted for the tiger prawn special, which came with long strips of pepper and a piquant tomato sauce. The sauce and the peppers tasted fine, the prawns were slightly overcooked and tasted of nothing and were also the smallest tiger prawns I’ve seen. But apart from that it was fine. 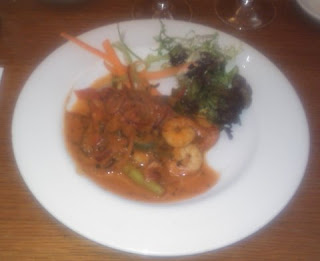 Jess and Mark had the aforementioned chicken and artichoke salad, which looked nice and they both seemed happy. Mark’s only complaint being that the salad was overdressed. Marcia had the calamari which performed as calamari tend to do, while Ana went for the impressive looking baked chèvre but was thrown by the large slice of beef tomato underneath the slab of cheese. Blake‘s potato skins looked perhaps the least appetising of the starters, and he was perplexed by the plain yoghurt accompaniment, expecting mayonnaise or aioli. Still, for the paltry price of a few quid it was hard to complain.

We had waited quite a long time for starters, but not long enough to contemplate chasing them and all had come out together – a feat very few restaurants have managed. Main courses followed starters fairly swiftly and our skepticism as to the lightness of the bites was soon justified as Jess’s plate of spaghetti all’arrabiata arrived. There was a lot of it. Really a lot.

Matt’s chicken and mushroom risotto was also generously portioned. It wasn’t a risotto, more a chicken and tomato rice bake with some mushrooms involved somewhere along the way. But he enjoyed it. 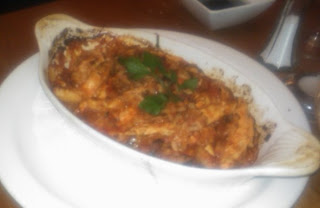 Blake had steak, which he was very happy with, pronouncing it perfectly juicy and tender while admitting that ordering fries after his potato skins starter might not have been the best call. Marcia and I braved the Lucanica sausage, which had been grilled in a a spiral and was served with sauted potatoes and green beans. It was pretty good, perhaps not as spicy as I might have liked, but I reluctantly admitted defeat towards the end (this was another light bite!).

Ana had bravely gone for the ambiguous fish fillet of the day, which was something unpronounceable. It came liberally covered in a herb sauce, but she was underwhelmed by the whole thing, declaring the fish “rubbery”. Mark – having been denied the final steak by Blake – also had fish, going for one of the restaurant’s most expensive dishes – the sea bass at £10.95. It was quite a small sea bass, and he was struggling to enthuse about it. 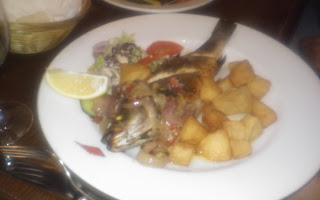 For most dishes, vegetables are ordered separately, but this isn’t one of those restaurants where you find yourself paying £16 for a main course only to be forced to spend another £3.50 for a small plate of barely-steamed broccoli. For less than £2 you can get a plate of veg that would do some people for dinner by itself.

Did we want to see the dessert menu? Of course we did. Blake, Matt and I all chose the warm peaches with pistachio ice cream. This was exceptionally good. The peaches were delicious, with a light caramel sauce and if there was a complaint about the ice cream it came from Matt who suggested that it should perhaps be more ice cream and less pistachio – never a terrible complaint.

Jess’s “never-ending” mango sorbet more or less justified the price of her entire meal as scoop upon scoop upon scoop was piled into a dish. Mark’s apple pie was “homely”, bathing in a pool of bright yellow custard. Marcia felt her chocolate cake was the weakest dish of the evening, while Ana was quickly defeated by a “too generous” hunk of tiramisu.

A handful of coffees and an over-sized port for Matt (in honour of @Ghoul_of_London who was missing his first whampreview in months), and the bill came to £23 each, which for three courses each, two bottles of wine and coffees didn’t seem bad at all.

The reviews and anecdotes beforehand suggested that Small & Beautiful could be hit and miss and this was reflected in the individual scores, with Ana having clearly been in the ‘miss’ camp. She was, however, in a minority and the first ever 10/10 was awarded (for value by Jess). The only complaint a couple of us had was that the menu itself wasn’t especially enticing, especially compared to Little Bay, the Belsize Road instituion that offers similarly cheap food.

There is no question however, based on this experience, that Small & Beautiful is an excellent option for a cheap and cheerful meal out on the High Road when you don’t want Nando’s, pizza or yet another kebab. Mind you, it’s no Speedy Noodle…