It’s Tuesday, there’s footie on the telly and nothing in the fridge. What are you going to do? One word, five letters, incorrect transliteration of the original Italian spelling. Yes, it’s pizza time.

A select group of locals with refined palates and empty stomachs decided to investigate pizza delivery options in West Hampstead – and lo, pizza-tasting was born.

There are four West Hampstead-based pizza delivery places at the moment, and we threw in one from Finchley Road for good measure. We had menus from Domino’s, Pizza Lupa, Papa John’s, Sarracino and that Finchley Road interloper Basilico on the table – one menu each; ready, steady, go.

We ordered in decreasing order of proximity in a futile attempt to cause a five-scooter pile-up. Basilico was first up and we went for a 13″ Ruspante (£13.75), which had smoked chicken, tomato, mozzarella, dolcellate, brie and red onions. First to order, last to deliver, taking just over the 45 minutes proclaimed on the website. Oddly, the website also suggested we might like to order some fresh carrot juice for £3.00. We declined. Aside from strange recommendations, the website was easy to use.

Domino’s had its Two for Tuesday offer and far be it from us to turn down free pizza. Once again ordering online pizza was simple. We picked a classic 11.5″ New Yorker (pepperoni, ham, bacon, mushrooms) and a 11.5″ Vegi Volcano (onions, green peppers, tomatoes, jalapeno peppers, extra mozzarella cheese) for £13.99. It took 32 minutes to arrive.

Pizza Lupa was next up – Pizza Cucina in London Bridge has merged with Lupa’s two north London outlets to deliver a new menu for customers of all three. We opted for the £12.50 13″ Funghi di Bosco (truffle paste, roasted field and porcini mushrooms, taleggio, thyme, truffle oil). It took 16 minutes to arrive. The web interface was identical to Basilico’s strangely.

Papa John’s also had a 2-for-1 deal. We chose a medium Papa John’s Favourite (Italian style six-cheese blend, pepperoni, sausage, Italian style seasoning) and a Chicken BBQ (chargrilled chicken, barbeque sauce, bacon, onions) both thin crust (you can also choose “original”). It took about 20 minutes to arrive and cost £13.99, but the online ordering process was slow compared to all the others.

Finally, a quick phone call to Sarracino (which doesn’t have online ordering) and an £8.95 Cafoncella pizza (mozzarella, sausage, potato, smoked cheese and rosemary) was on its way. By far the quickest (but also the nearest), this took just 10 minutes.

So, what did we think? There wasn’t a great deal of agreement, especially with so many strong flavours involved. The Cafoncella split opinion the most – it was my favourite, with the pungent rosemary just managing not to overpower the other flavours. But one man’s “subtle” is another man’s “bland”, it would seem. The base was crispy and it was clearly freshly made. 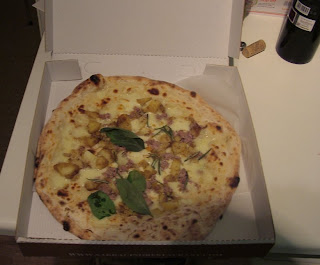 Basilico’s cheese feast of a pizza was too rich and the red onions too sweet for me. It looked spectacular, and was the least round of all the pizzas. Brie is an unusual pizza topping, and it slightly overwhelmed. The base wasn’t so much thin as almost non-existent, making this the hardest to eat. 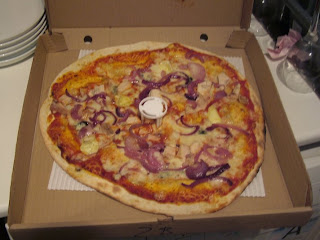 Pizza Lupa’s mushroom extravaganza looked the best, and smelled amazing. It wasn’t the hottest sadly. If you like mushrooms then you are probably going to like this pizza really quite a lot although I’d prefer it with less cheese. 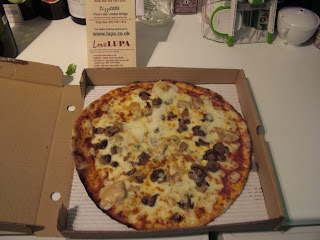 Those are the ’boutique’ pizzerias, but what about the big boys? Papa John’s and Domino’s both delivered the hottest pizzas, the most uniformly round pizzas and had pre-sliced them. Domino’s New Yorker disappointed – a little too greasy, and the base wasn’t especially crisp. 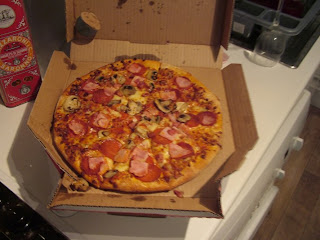 The Vegi Volcano on the other hand was the surprise package of the night – it didn’t look the best, but it tasted good, with the right balance of jalapenos to give it a kick. Of the four pizzas from the two chains, this was my favourite. 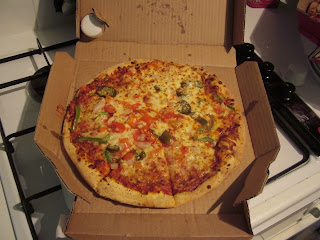 Papa John’s Favourite was our least favourite. The six cheese blend was just an unidentifiable mound of melting fat, and the pepperoni slices were far too crispy and fatty. Not for me. 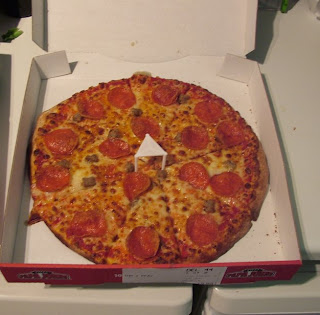 The Chicken BBQ looked strange, with the BBQ sauce drizzled over chef-style, eliciting laughs from us all. However, “if you like BBQ sauce, then you’ll like this pizza,” seemed to be the consensus. Some people went back for seconds, I didn’t finish my slice. 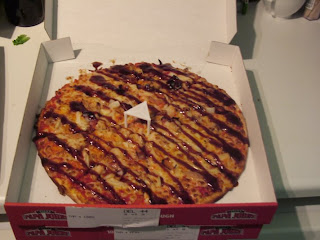 All but Sarracino offer online ordering, but if you’re a first-time customer then the registration process for all the websites is tedious and slow. Phoning up is probably the better option although you’ll then have to pay cash on delivery.

Between five of us, we’d munched our way through the best part of seven pizzas (and may or may not have drunk a reasonable number of bottles of red wine). We were full, it was time for bed, and there was still plenty left over for breakfast…

This blogpost is sponsored by Domino’s Pizza. All opinions expressed are completely independent.