Sunday, January 29th 2023
I enter the Mayor’s parlour on a wet Saturday afternoon clutching an espresso from St Pancras. The mayoral ermine is on display, along with an incongruous golden football boot in a cabinet that also contained silver cake slices masquerading as trowels (for ceremonial brick laying you understand), punch bowls and goodness knows what else. But how does the man who has to wear the robes feel all this mayoral bling fits his rock’n’roll image? 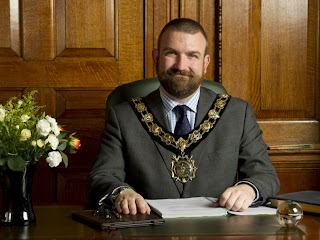 Camden Mayor, Jonathan Simpson, 36, doesn’t immediately strike me as someone who is going to be over-excited by the regalia of office. When I meet him, he’s wearing a suit as casually as one can, and is certainly not weighed down by the chains of office.
The Mayor has been a councillor since 2002, initially representing Fortune Green for the Lib Dems. In May 2005, he controversially defected to Labour over the Lib Dems’ Asbo policies and was subsequently elected to represent King’s Cross in 2006, which he held in May this year. Away from public office, his private-sector career is in the area of regeneration. He has also served as a special constable in the Met and was a board member of the gay rights organisation Stonewall from 2000 to 2002.
Despite not being at first glance the clichéd image of a fusty ceremonial mayor, The Mayor tells me that every Wednesday he does indeed don the ermine for the weekly nationalisation ceremony. “It’s very humbling,” he says. “Sure, there are Americans who’ve lived here for 10 years but there are also people who’ve fled their home country to come to the UK.”
This is just one of the many roles the Mayor has in Camden. Unlike some London boroughs, such as Tower Hamlets and Hackney, Camden’s mayor is an ambassadorial position with no political or executive powers. The mayor also chairs council meetings, much in the way of the Speaker in the House of Commons. The mayor is nominated (and therefore de facto elected) by the majority party of the council and holds office for 12 months. With Labour in overall control of Camden council, there will be no rotation of the post between parties when it comes time for someone else to be elected next May.
Simpson takes the apolitical nature of his position extremely seriously. He politely declines to answer any overtly political questions, but also backs away from anything that might be only remotely construed as political. I ask what he sees as the biggest challenges facing Camden over the next few years, beyond the obvious financial constraints brought about by the cuts that is. Even this is clearly risky territory.
I get the sense that as a relatively young mayor, he is determined not to let what seems to be a naturally open and conversational manner get the better of him. The most he’s prepared to say is that “anyone would have to be anxious about public services.” He won’t even be drawn into anything particularly quotable on how he feels about spending a year away from the cut and thrust of council debate.
Caution is perhaps the best approach for an office whose last occupant, Omar Faruque Ansari, was stripped of his responsibilities in January after being arrested on suspicion of benefit fraud.
When conversation turns to pushing the merits of Camden, Simpson is of course anything but reticent. With the incredible Gothic revival frontage of St Pancras looming large in the window behind him, it is easy to agree when he says, “We have some of the most amazing places in London outside of Westminster, and we’re much cooler than Westminster.” Camden is full of “bohemian, vibrant, young people”. It was this that first attracted the Mayor here when he was a student at UCL in the 1990s. “I came to Camden ‘cos it was fun. I absolutely loved the place.”
This perspective on the borough (formerly the three boroughs of Hampstead, Holborn and St Pancras) informed the Mayor’s decision to choose Camden’s musical heritage and its plethora of live music as his ‘mayoral theme’.
“More than a thousand people work in the live music industry in Camden and there are 61 live music venues.” The figures are well rehearsed, although almost certainly include those Kilburn High Road venues that fall on the Brent side of the road but that have willingly been adopted by Camden’s marketing machine. Of course The Roundhouse is one of the best known and loved of the live venues and The Roundhouse Trust, which helps kids get involved with the arts, is the mayor’s chosen charity for his term of office.
Simpson has also given his tenure as mayor a slightly edgier vibe by asking his good friend and BBC London radio presenter and self-proclaimed “chubby glamourpuss” Amy Lamé to be Lady Mayoress. He confesses that he thought she’d say no, but her American roots came to the fore and “she’s milking it.”
Simpson’s passion for music is evident. Did I know, he asks, that Morrissey’s guitarist Boz Boorer is planning to put on a regular rock’n’roll night at The Alliance on Mill Lane? I did not. The first one is November 27th.
He still manages to go to live gigs, even if the first part of the evening is usually in a work capacity. For someone who ceremonially comes after only the royal family and the Lord Lieutenant in the pecking order, it’s great to see him talk enthusiastically about electro-punk band Robots in Disguise, who performed for some excited kids and bemused parents at Holborn Library a couple of weeks ago.
Simpson confirms that his job is “absolutely astonishing”. “You can’t comprehend the amount of work it is. It’s certainly not just drinking tea and opening fêtes. I have done 340 events so far since being elected [in May], including opening the Kentish Town Baths and meeting the French ambassador.”
It strikes me as refreshing – and utterly appropriate for an inner London borough – to blend the historic paraphernalia of office with a younger, alternative outlook on the merits of the area. It would be a worthwhile legacy if subsequent mayors felt similarly able to find a theme that matched their own interests, rather than feeling pressured to focus on something more predictable.
Indeed, as I walked past the Eurostar terminal at St Pancras on my way back to West Hampstead, I found myself hoping that the next Mayor will also manage to marry the dignity of office with a bit of Camden joie de vivre.

What have I missed since October 24th? WANTED: Eager football players