It’s been a busy week of snowy excitement – but while you were reading Wikileaks, what whampleaks did you miss?

On Monday, local residents got together for an area action group meeting to discuss transport, shops and the budget cuts. Sadly, it wasn’t the most representative group of West Hampstead residents.
On Thursday, a different group of locals (with three overlaps) got together at Whampgather V.
One of those overlaps was Lib Dem councillor Keith Moffitt, who gets the first Tweet(s) of the Week:

In the bleak midwinter, why not go to The Tricycle to see the astonishingly good Midsummer.
Kilburn’s Christmas tree was switched on by the Mayor of Brent on Friday evening – by Saturday morning it had disappeared. Apparently Kilburn Business Friends could afford only one night’s insurance.
Will Kilburn’s “Sports & Arts” bar get a licence. It seems unlikely. Here’s the licence application, and two background articles.
A woman on a very late tube was intimidated and assaulted by a girl gang at Kilburn station – for just 50p.
Back in West Hampstead, the West End Green Christmas tree underwhelmed.
But there are plenty of exciting Christmas shopping opportunities in the area.

There’s some disagreement about whether to extend the West End Green conservation area.
Camden and Islington will not be sharing a chief executive, as was mooted earlier in the year.
Cuts were debated in the council chamber. Local councillor Nancy Jirira had strong words in advance for Labour – and for her own Lib Dem party nationally.
Library cuts are inevitable. Cllr Tulip Siddiq posted the annual cost of each Camden library, but told me (in the second of our Tweet(s) of the Week:

Pizza Lupa has won a pizza award.
The Railway reacted positively to some complaints about early morning noise.
Explore Learning is opening in Fortune Green and is on Twitter.

So, yes, it snowed, and that means there’s a Photo of the Week, this from (and copyright) @antjebormann 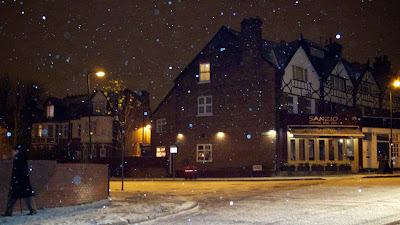 Was tough to pick a final tweet of the week this week, but here’s the winner

Blowing my own blog trumpet Sunset