Friday, January 27th 2023
Yesterday, the newly formed West Hampstead Wanderers kicked off their season in the Hampstead 7evens League with a game against The Gym United. Player/manager Nick Hudgell reports:
Match day 1. Monday 10th January. KO 7.15.
The Gym United 10-4 West Hampstead Wanderers
The first game of a new season, let alone for a new team is always hard. The Wanderers took to a cold and dark Fortune Green Playcentre for their first ever 7-a-side game against the ominously named ‘The Gym United’. Despite a slight delay while the floodlights went off and the Wanderers practiced some 1-touch in the dark to hone their skills, the game started fairly promptly at 7.15pm, a light drizzle making the ball move quickly across the surface.
The Wanderers, used to playing on the more spacious Fortune Green park, started slow but, despite some early pressure from TGU, they opened the score sheet. The goal will undoubtedly go before the dubious goals committee, but was claimed at the time by @nwsixdan. The lead was short-lived as the red-clad Wanderers conceded a penalty that was swiftly converted to bring TGU level.
The Wanderers regrouped and quickly got back into their stride with a goal from @Talalb01 to go 2-1 up, but under sustained pressure from TGU the Wanderers lead couldn’t last for long. TGU’s main player (and league organiser) showed some impressive striking ability and a flurry of goals put them quickly into the lead despite some superb efforts from @DJVectra in the Wanderers’ goal. Thankfully, before the half was up, a sloppy pass across the goal from TGU’s defence allowed @nickhudgell to steal in and grab a goal – a lifeline on the stroke of half time.
A second half “impact substitution” brought on a flu-riddled @thomhoffman, but even operating on just one lung, he gave the Wanderers a bit of pace, some more movement, and put TGU on the back foot. However with only one more Wanderers goal from @nickhudgell, and a couple more from TGU – the final whistle blew with the score 10–4 to The Gym United.
If the game had gone on longer, the Wanderers could have come back into it. They learned and adapted as the game went on. The team certainly learned a few lessons, but also took away a lot of positives, with some fantastic individual performances from @samwong1 and in goal from @DJVectra and @Martin_Tse.
Thanks to Chris from @TheRailwayNW6 for a meal-deal offer that was taken up by four of the team – a good way to end the day.
Team:
@NickHudgell
@TimCheese
@SamWong1
@oneDavidLewy
@Martin_Tse
@DomChristie
@Talalb01
@nwsixdan
@DJVectra
@ThomHoffman 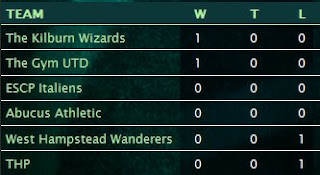 The next match date will be announced very soon.