On Thursday, we took over a good chunk of West End Lane’s popular Vietnamese restaurant Ladudu in the latest installment of whampreview.

Unlike previous reviews, we had a set menu and arrived all at once – setting both the kitchen and front of house a sizeable challenge. Complimentary prawn crackers and green and jasmine tea arrived promptly and the conversation across our three tables started to flow as we waited for our appetiser platters. Several people had been to Vietnam and expectations were high.

The first dish to arrive was a green papaya salad (one of my personal favourites and also popular with Eugene) surrounded by summer rolls filled with prawn, vermicelli and mint. These had very clean flavours – although my table felt the mint was a little overpowering giving what Sam described as a “toothpaste” finish. Other diners thought the mint made these rolls fresh, light and fragrant. Stefanie thought this was typical of what she’d eaten on her travels. In contrast to these sharper flavours, a plate of fried calamari, fried prawns, and vietnamese spring rolls had a lovely chilli warmth to them – the squid in particular was “bang on”, according to Thom. Paula thought they were light and tasty, although James thought the spring rolls were nice but not distinctive. 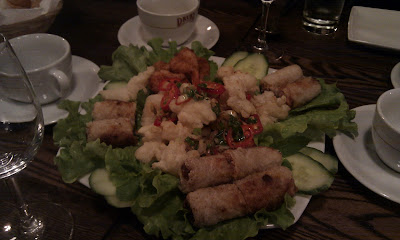 The dipping sauce that Daniel and Sheena said really helped bring these bite-size morsels to life was a bit slow to my table. Alicia wondered whether a sweet peanut dipping sauce might be a good addition although she loved the summer rolls. Overall, most of us agreed with Tom, who loved the style, presentation, tastes and textures of the platters.

Having demolished the starters, and moved from tea onto wine and beer, we were then served a hot and sour prawn soup. This was laden with prawns, white fish, squid and er.. pineapple, which caught a few people by surprise – “I saw it, and left it,” said Claire. It was generally very popular though; “a great mixture of tastes that somehow came together perfectly,” said June. It also briged the gap nicely as we waited for our main courses. Nicky thought it would make a “nourishing winter cold remedy”. Simon liked it but thought it meant the whole meal was quite a lot of food. Tom declared it to be “wonderful”. “The inclusion of big pieces of squid and things really made it a dish I would eat as a main. Perfect balance of flavours too.” Daniel called it the “Goldilocks of soups”.

For a main course, each table got a bowl of beef curry and a bowl of chicken curry (our token vegetarian got her own vegetable curry). Simon liked the curries but preferred the starters, Bill thought they needed a little more kick, and SJ said they were nice but she wasn’t blown away. Alicia, however, thought they were tasty. Tom D summed up Nicky’s table’s view of the curries, saying they felt a bit generic south-east Asian. Eugene had a similar perspective, comparing them with a Wagamama’s curry. It’s probably fair to say that although everyone liked these dishes, no-one was bowled over.

Luckily all the other elements of the main course were much more successful. We also had rice, rice noodles, a chicken stir fry dish, fried noodles, and morning glory (which Wikipedia tells me is designated a Federal Noxious Weed in the US, but was one of the most popular dishes for whampers – Bill declared it the highlight of the main course). On my table at least, there was quite some time between all these elements appearing and probably more rice and fewer vegetables than we needed.

The chicken stir fry (or veg stir fry) was a big hit. Paula commented that the smoky mushrooms brought the dish alive, and Mark agreed it was well done. The fried noodles were also very popular on my table but took a while to arrive on Tom’s table, although once they did they were well received.

The wine continued to appear – house white for my table, a Marlborough Pinot Noir on Tom’s table that he raved about, and white and red for Nicky’s gang. It seemed that first-time whampreviewers were quickly getting the hang of the whole thing (eat, drink and be merry). 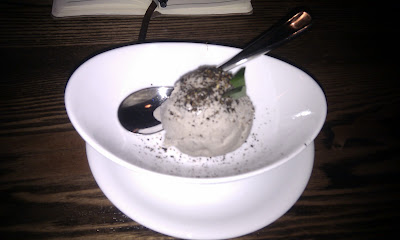 Most of us had room for dessert – especially when it came in the form of Ladudu’s truly outstanding ice cream, which is probably the best in West Hampstead. Coconut and pandan, lychee, vietnamese coffee, and  black sesame ice cream all elicited gasps of amazement. James said his was “the best lychee ice cream I’ve ever eaten” (yes, it was the only one – but I think the sentiment is valid). Nicky reckoned the black sesame ice cream was worth going back for all by itself – and the waiter enigmatically promised that they are working on a new improved sesame flavour “which will be as black as my Asian hair”. Alicia was the sole dissenting voice, saying her ice cream could have been sweeter.

The other dessert option was a “celebratory glutinous rice cake with coconut reduction” – this was a bit heavy for Dominic and Isabelle, who failed to finish theirs. On my table, only Sam was in favour while Claire said it wasn’t to her taste. Tom’s table were more enthusiastic, with Paula saying it was “savoury, interesting and chewy”.

Each table had a designated waiter or waitress, and service was friendly and well-informed if a bit slow at times as the kitchen tried to get everything out together. Large groups and set menus are also a relatively new venture for Ladudu, so it’s likely that they’ll iron out some of the kinks – and of course going in a small group or as a couple would be a very different experience.

Overall, the evening went very well. Some dishes disappointed those who’d been expecting more exciting food, and those who had eaten at Ladudu before felt the menu hadn’t necessarily showcased the best of the restaurant’s food. However, other elements of the meal were really successful, and there was a strong sense that people wanted to come back.