The stretch of West End Lane from Nando’s to Walnut is set to see big changes over the next couple of months.

As many of you will have read on Twitter, or (heaven forbid) seen with your own actual eyes, Walnut has closed. The ethically minded restaurant has been a fixture on the corner for just over 10 years, but came up for rent back in June (at just under £2,300 a month if you’re interested). Feng Sushi – also known for its ethical stance – will be moving in this June. Indeed work has already started on what will be the chain’s eighth outlet.

There’s much more detail on the design of the 50-cover restaurant here. Feng Sushi expressed an interest in West Hampstead a long time ago, so may feel a bit miffed that in the meantime, the area has become sushi capital of NW London. Alongside MeLoveSushi on West End Lane, there’s also newly opened Sushi Kou on Fortune Green, competing head-on with the well-established Yuzu. There are two newish sushi places on Finchley Road, and the longer-standing outlets Sushi Gen (with an ominous For Lease sign outside), Atari-ya on Fairfax Road (for my money the best of the local options), and Yo! Sushi in the O2 centre.

If the rumours that Karahi Master has closed are correct, hot on the heels of Bon Express shutting down, then are we finally relinquishing the mighty kebab for the healthier sashimi?

Still, if you’re missing your meat fix, rejoice. Apparently some of you haven’t yet caught up with the news that a butchers is coming to town. Since I started this whole blog/Twitter thing back in 2009, this has probably been the single biggest moan of locals: “Why can’t we have a butchers”. The fact that such places have to make a profit in what is a tough market has largely washed over you. So, I don’t want to hear a single person complain that Hampstead Butcher & Providore is too expensive. The high-end butchers already operates on Rosslyn Hill in Hampstead, and has done so for a couple of years now. The only way that a butcher is likely to survive in a high rent area like West End Lane is going to be to target the higher end of the market, and differentiate itself from the supermarkets.

Hampstead Butcher & Providore (I assume it’s not changing its name for us) will be at 260 West End Lane, where the Chinese medical centre has been (next to Domino’s).

If you fancy a chop with your chop, then step next door. 258 West End Lane is becoming a new salon. Because that’s what we really need in the area. Marco Aldany is a new name for me, but then I’m not really a salon kinda guy. It appears to be a Spanish chain of hairdressers. I can’t tell you much more about it, but I can show you a picture of what the front will look like if it gets past the planners, and tell you that the glass will be armour-plated. Should you be thinking of driving a car into it or anything. 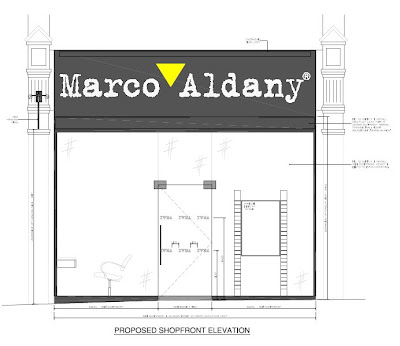 Throw in the changes to The Lion – which has been learning the hard way about the power of Twitter – and the northern end of West Hampstead will have a very different feel to it by the end of the year.

A market for West Hampstead What have I missed since April 16th?