If you’ve been reading the local film listings of late, you’ll have spotted that the Tricycle in Kilburn has been taken over for the Trinidad & Tobago cultural village. Fiona went along to see whether it had brought some Caribbean sunshine to the mean streets of Kilburn:

“After an incredible weekend for Team GB, my flatmates and I had thoroughly caught Olympic fever. So on Monday night we decided to try one of the cultural villages that have popped up across London, and as Trinidad and Tobago have made the Tricycle Theatre in Kilburn their home, it seemed like the obvious choice. 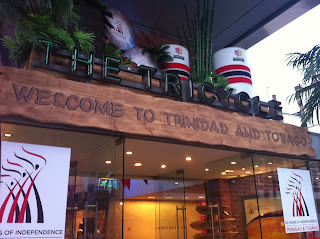 The evening’s main event was a dance class was led by Attillah Springer who is heavily involved in the local Trinidad community in Kilburn (she has a blog). She began by explaining the history of wining and its importance as an expression of freedom and female sensuality. For her wining is about owning your own body and displaying it proudly during Carnival. We were repeatedly told ‘Your bottom is not your enemy!’

We started with simple ‘chipping’ (effectively walking with rhythm) and then moved on slowly to creating the signature grinding movement. I won’t pretend I was any good at it but I did manage to learn something and had a great laugh doing so – and who knows, by the time the Notting Hill Carnival comes around I might be wining with ease!

After the class we went downstairs to eat. There are five or six stalls serving up traditional Caribbean food from tiny hotplates and microwaves. We chose one, which turned out to be from Jouvert, a Trinidad and Tobagan restaurant rather annoyingly based in SE6. The roti was really excellent: tender chunks of mutton with spicy potatoes, proper chapatti, and grilled plantain on the side, all for £8 (or £6 without the plantain). No cards are taken, so take cash! We washed it all down with Carib beer, and sat back to watch some athletics and cheer on the Jamaicans on the big screen as sadly no one from T&T was competing that evening.

There is still plenty more to come as the village runs until the 25th August. The workshop floor where we had our dance class was covered in glitter from an earlier children’s workshop, and if you can tear yourself away from the Olympics (we couldn’t) there are also film screenings and music concerts (the later sadly seems to have sold out) in the evenings. We had a great evening, and on a wet squib of a summer evening, it was nice to find a slice of Caribbean sunshine on our doorstep!

You can find out more here: http://trinbagovillage.com/.”