Short notice, yes, but I just got confirmation that the second Friends of Fortune Green outdoor film screening will happen this Saturday evening. It’s Stand By Me. 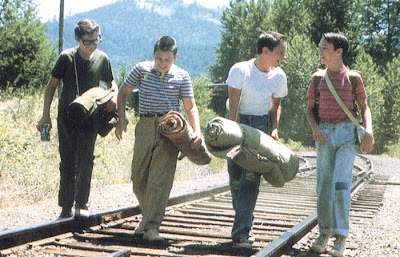 If you came along to Breaking Away earlier in the summer you’ll know how this works. Basically, the film is powered by bicycle. Now, Breaking Away is a film ABOUT cycling, which probably inspired people. Stand By Me isn’t (although I do seem to recall a couple of scenes on bikes?), but people still need to be willing to do a 5-10 minute stint on a bike. It all worked fine last time, and there’s no obligation at all to get on your bike and ride.

The film, if you don’t know it, is a 1980s coming-of-age classic, starrring Wil Wheaton, River Phoenix and Corey Feldman (Richard Dreyfus and Kiefer Sutherland are also in it). It’s based on a Stephen King novel and was directed by Rob Reiner. So, basically, it’s a good film. If you’ve already seen it you’ll know it’s well worth watching again and if you haven’t then now’s the perfect time to rectify that.

The screening starts at sundown – which is 7pm, though if you want a good spot I’d get there quite a bit earlier as the bikes do slightly limit the viewing angle. Last time there must have been at least 200 people there, so hopefully there’s a similar turnout this time – and hopefully it’s too cold for the mosquitoes that plagued us all. Bring a picnic blanket, bring a picnic (Nautilus should be open for a sustaining fish & chips takeaway), and bring some friends.

The event is free, but FoFG will be asking for donations to help cover similar future events, so be nice and give a little something for this great community event.

Democratic paradox south of the tube line Are you sitting comfortably?