I know normally I’m exhorting you to go to Kilburn for comedy on a Monday night, but on October 22nd I suggest you head down a bit later. Why? Because there’s a public meeting that is really worth turning up to if you want to understand and contribute to the shaping of West Hampstead over the years to come.

WHAT (the local action group) in conjunction with the West Hampsead Neighbourhood Development Forum, is holding a public meeting to bring everyone up to speed with how the NDF is evolving and, more crucially, to set the boundaries of the area to be covered.

This is a subject I’ve touched on recently (read the comments on that link to get up to speed with the latest), and nothing has yet been finalised, especially in terms of where the southern boundary of the Neighbourhood Development Plan should be. You might believe, as I do, that as the area around the stations is likely to see the greatest development pressures the people who live both north and south of the train lines should very much be included. However, as things stand, the cutoff point for the plan could well be the tube line itself, so those living within spitting distance of the O2 car park, for example, may have little influence on plans to redevelop it, while people living the best part of a mile to the north may be far more involved.

You don’t need to do any background reading to come along – all will be explained. Help me lower the average age of attendees, find out what’s happening in West Hampstead, and have your say.The “other speakers” mentioned below are from Urban Design, Planning Aid and Camden’s planning department. 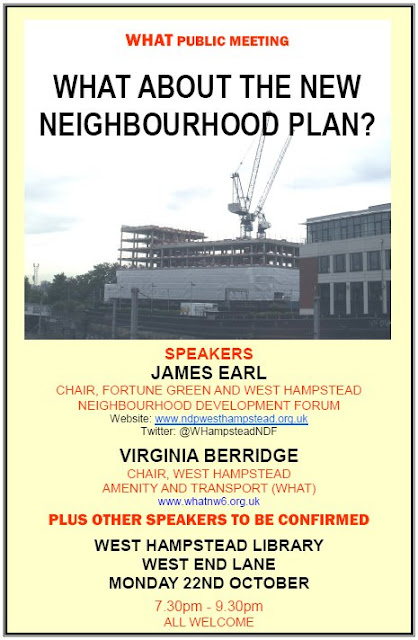 What have I missed since October 1st Whampgather X – November 15th