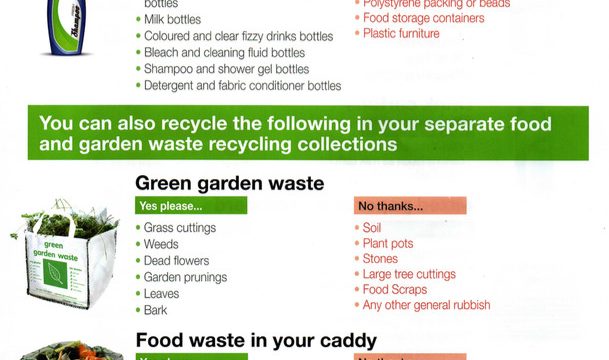 At local amenity group WHAT’s AGM last week, the thorny topic of rubbish was the theme. Following the departure of WHAT’s founder and long-time chair, Virigina Berridge, this was the first blooding of new co-chairs John Saynor and Mary Tucker.

John opened the presentation by saying that most attendees were keen recyclers (hopefully true). Therefore, is Camden’s main challenge to persuade those who don’t or won’t recycle to do a better job? Particularly in West Hampstead with a high turnover of renters.

Richard Bradbury, Camden’s head of recycling, gave a fast, well-rehearsed presentation with many slides. He emphasised that 85% of the contents of a Camden bin could be recycled, yet residents only manage 25%, which is pretty feeble whatever your political persuasion.

Richard proposed a outcome-focused plan to make the new rubbish contract a success: increased recycling, less fly-tipping, less contamination of recycling bins/better technology, educating the public, and flexible responses to specific problems. He handed out an update on what can be recycled. 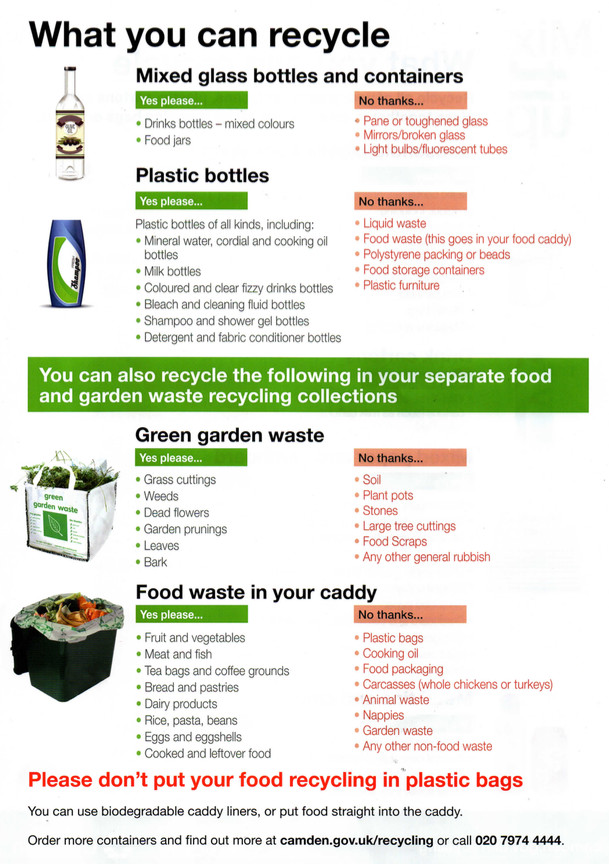 Then came a lively and productive Q&A session. From which we found out some of the details. We’ll get a leaflet telling us our fortnightly area dates for a whole year. People with babies need to pre-book extra nappy collections. We can now recycle black food trays. Shredded paper is acceptable, even though its fibres have been broken down. And there will be one-off collections for textiles and batteries (as well as large items), to be ordered via the website. 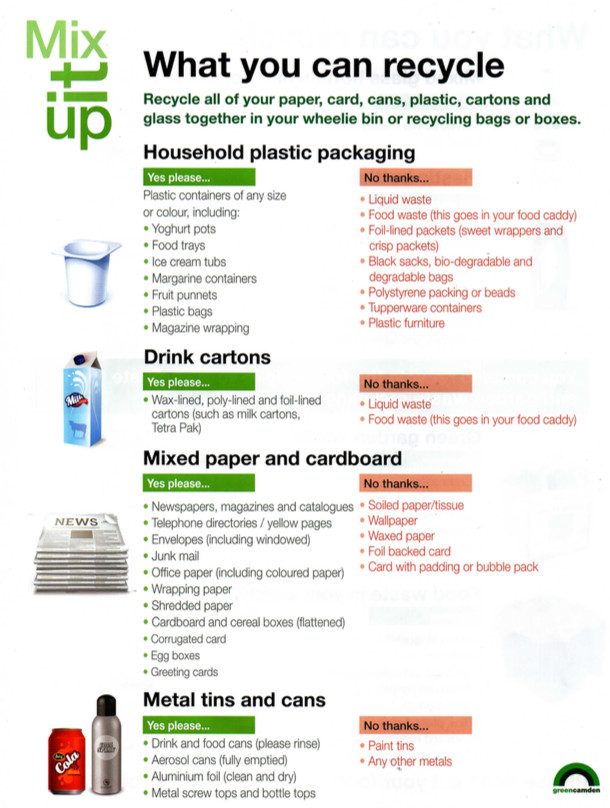 You can recycle so much that it goes onto two pages!

Technology to the rescue! There’ll be an app from which you can take photos of any problems and send to them to Veolia, the contractor. Vans will also have CCTV to check accuracy of collections with the footage saved for 3 months and to spot fly-tipping hotspots. The fly tipping penalty will be a fixed charge of £200 if Camden can actually get the right evidence. The whole thing sounded a bit “shop your neighbour”, though everyone at the meeting was too polite to say so – and maybe some neighbours deserve to be shopped?

The representatives from Veolia were surprised by all the exceptions residents raised. For instance, they could only say they’d ‘look at ways to contain the waste’ in response to Solent Road’s bag-ripping foxes. If you can’t get your recycling – or any – bin on or next to your pavement you’ll have to ring up and ask for an ‘assisted service’. This will presumably mean Veolia would exeed its allotted 15.6 seconds per property – which translates as “one step in”. If you currently have green or brown wheelie bins you’ll have to get stickers if you want to use your bins.

Green/garden waste will be collected weekly, but it’s £75 for a year or £60 for the nine months from spring to autumn. These collections (three sacks a week) can be shared with neighbours, but only if you pre-register. Pensioners will get a discount, though the details are still being decided.

Still ‘no’ to soft plastics like dry cleaners’ coverings and junk mail wrappers. Caddy liners? ‘They don’t last a fortnight. Change them weekly.’ Light bulbs won’t be collected. Rats? ’Keep your receptacle clean.’ (And ‘No comment’ to query about new commercial rubbish collectors springing up across Camden.)

It’s strange to think that it was only a few years ago that we were getting bi-weekly rubbish collections, and soon we will have only fortnightly. West Hampstead already has a rubbish problem, with regular fly tipping, although time banded collections on West End have improved things. We will have to see how things change with the new contract from – and you couldn’t make this up – 1st April.