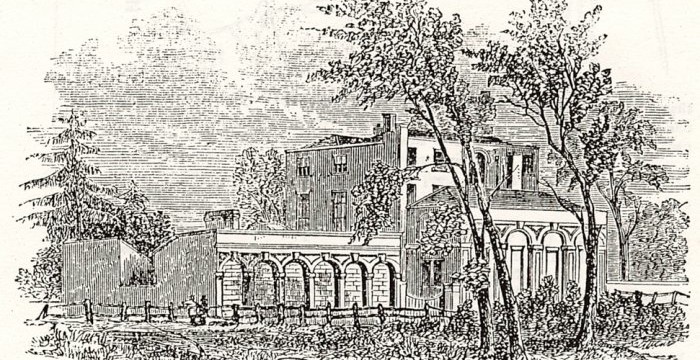 West End House was built in the mid-17th Century and was originally the home of the Beckford family. It stood approximately where Rowntree Close is today, opposite the Thameslink station, and has an interesting history, including a four year spell as a philanthropic laundry school.

Don’t confuse this West End House with another building of the same name, which was the home of the Miles family near West End Green. To help distinguish between the two, locals sometimes called the Beckford property Old West End House and the Miles’, New West End House. 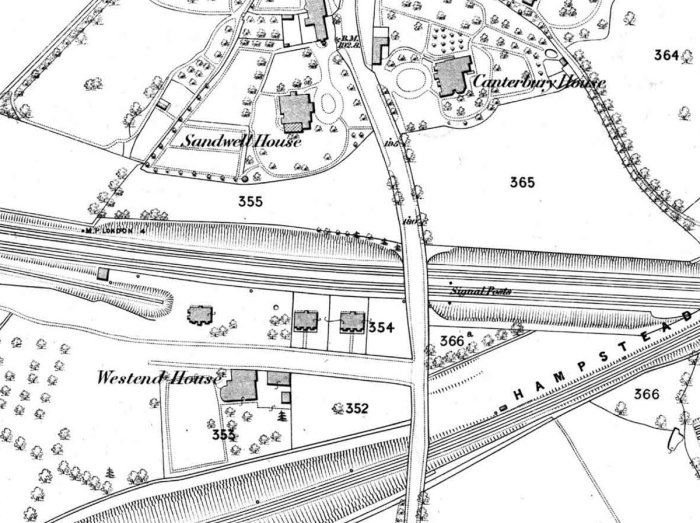 The Beckford house was much modified by successive owners and stood on a low hill. In 1842, West End House was described as a three-storey building with nine rooms on the top floor and seven on the floor below, with a balcony. There was a drawing room and a study on the ground floor plus kitchen and servants’ hall – and a water closet. The house came with upwards of 20 acres but by the 1850s it was available to rent with just a small amount of land. 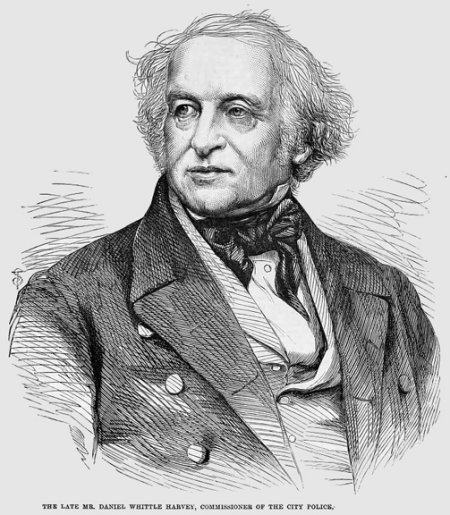 In 1855 the last tenant to rent the mansion as a home moved in. Daniel Whittle Harvey had been a radical MP who founded The Sunday Times, and now held the prestigious post of Commissioner of the City of London Police. But the neighbourhood was changing and he stayed only a couple of years. After Whittle left, the property’s slow decline began and by June 1857 it stood empty.

The setting of West End House was irreparably damaged by railway building. What we now call the London Overground was originally promoted as the Hampstead Junction Railway in 1853. By 1856, the railway company had purchased five acres of land immediately south of West End House. The Act authorising the Midland Railway’s extension to St Pancras was passed in 1863 and its route lay in a cutting immediately opposite the old mansion. Railway building was very disruptive and unlikely to appeal to most tenants.

Under these circumstances, landlords looked for alternative rentals, maybe a school or similar concern. 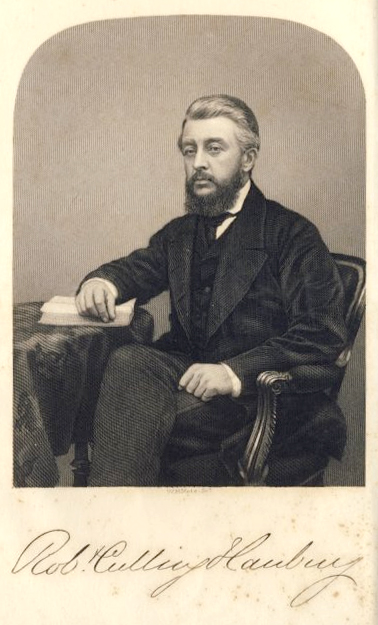 Robert Culling Hanbury (1823-1867) was an extremely wealthy partner in the old brewing firm of Truman, Hanbury and Burton. At one time their brewery in Brick Lane was said to be one of the largest in the world. He helped set up the Reformatory & Refuge Union in 1856, and the following year the Union decided to create the Girls’ Laundry & Training Institution for Young Servants. Then as now, many households sent their laundry away to be done. The Institution was the idea of “some ladies who had considerable experience in the work of female reformation”, so this training was aimed at a specific group.

In November 1857, The Times published an appeal for £500, which was needed to set up the laundry “for the employment of females from the London refuges and reformatories, who are of sufficient age to leave these institutions, but require further training or protection from bad parents.”

The Institution was described as an “industrial home” – not a reformatory or a refuge – it would provide the trainees with “protection, employment and prepare them for future service”. Girls from poor and broken homes could look forward to, at best, marriage and children; and at worst, prostitution. The difficulty in “reclaiming” girls who had “left the path of virtue” was mentioned, as was the fact that there were few opportunities for any woman to earn a regular and living wage. If the girls could be trained, in this case for laundry work, they’d have a skill to offer, “as would enable them to undertake engagements either in families or in washing establishments, or as wives. It is proposed that the girls should be properly cared for, and receive necessary teaching of other descriptions”.

Needlework, housework and plain cooking were also on the curriculum. It was hoped the Institution would gain a reputation such that respectable working men would also send their girls for instruction. As was common for the time, religion and strong moral beliefs pervaded the running of the Institution.

There were regulations governing the selection of girls to be admitted. Nothing was free. A girl certainly couldn’t just turn up and ask to be trained. The Ladies Management Committee, which almost certainly included Mrs Hanbury among its members, vetted the entries. Admission was £10 for each girl, payable quarterly in advance, unless there were special circumstances or she had worked in a laundry before. The intention was for the girls to earn enough to cover their day to day expenses and make the business self-supporting. A few critics raised doubts – at least one recent attempt by another philanthropic organisation to train girls for laundry work had failed.

By January 1858, £268 had been raised and the committee searched for premises. This took some time. It decided West End House was the most suitable “on account of its airy situation, (good for laundry and inmates’ health), distance from surrounding buildings and capability of accommodation in the house”.

A lease was signed, but the rent was higher than the committee had intended paying, at £150 a year. Given the known proximity of the Hampstead Junction Railway and the dirt associated with steam engines, the committee’s decision to rent West End House was questionable, especially as more money had to be spent to create the girls’ accommodation. Then there were the further costs associated with providing laundry facilities and equipment, all this before the business could be launched. 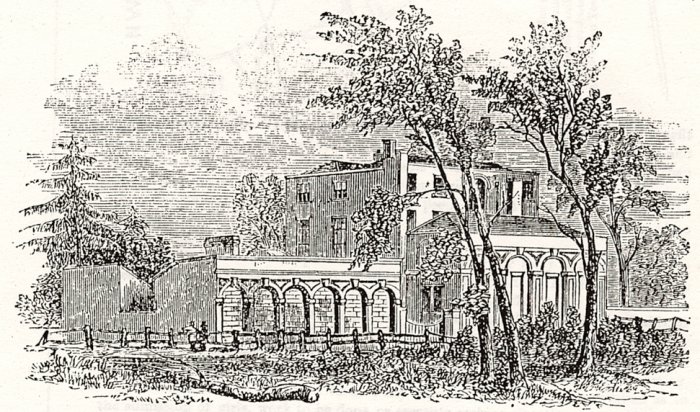 The Training Institution took possession of West End House on 5th July 1858, and began building the wash house. The first three girls were admitted a week later on the 12th. In January 1859, an article in The Philanthropist described progress so far. The number of girls had risen to just seven, as it was decided not to admit more until all modifications had been completed. The plan had always been to open the enterprise with a few girls who already had laundry experience, get a few clients and then take in trainees. As regards their moral welfare, the girls sometimes attended services held at Christ Church in Hampstead; the Reformatory and Refuge Union had given books for a library and the Bible Society had likewise donated a number of bibles. But the article concluded with the ominous statement that “the sum which was generously contributed last year is entirely exhausted”, spent on fitting up the wash house and furnishing the Institution to receive 40 girls. And as yet, no laundry work had been done; for the past six months the girls had been doing needlework “necessary for the house and laundry”.

There were more appeals for pecuniary aid. In April 1859, Hanbury said he believed the enterprise would “realise very favourable results”. That September, when the laundry business had barely got underway, the entire estate, including the house, was put up for sale. But as the Institution’s lease still had an unexpired term of 28 years to run, it continued working while the land around it was slowly developed.

The greatest care had been taken in selecting a matron who would not only instruct the girls in laundry work but also be responsible for their moral training. Accordingly, the Union advertised for “a person of sound religious principles, influence and tact.” Miss Sarah Woodhams was the matron in January 1859 but by 1861, the laundry was being managed by Susan Beech, a 50-year-old widow born in Islington. Her live-in staff comprised two assistants and a porter. Mrs Beech was in charge of 25 girls, far fewer than the 40 originally intended. Of these, 21 were “under training for laundry services”, and the remainder, “under training for domestic services”. Their ages ranged from 14 to 17.

A track off West End Lane became Iverson Road, and in 1862 three large houses were being built there. In March that year, the laundry was in trouble with the local authorities over a blocked drain, but the committee blamed the builder working on the land opposite, saying he had diverted the drain. In May, a bazaar was held to raise funds for the Institution but by September 1862 West End House stood empty once again. Matron Beech, her staff and the girls had gone. There is no record of the laundry relocating elsewhere, so almost certainly it had closed. Presumably the business had been unprofitable, which meant that unless expenses and salaries were covered by donations, it couldn’t keep going. Inadequate funding appears to have been a problem from the very start.

The Midland Railway Company bought West End House and the three large houses built opposite, and used them as temporary accommodation for its workers, the navvies who built the line to St Pancras. The mansion was demolished around 1873.

Today’s visitor to Iverson Road will find no trace of West End House or the three Victorian villas. It took 25 years for the site of the mansion and the land round it to be built on and the area has undergone extensive redevelopment in recent years. Two of the villas were demolished around the turn of the 20th Century; the third was adapted for use as the first Midland Railway station and demolished after the station was relocated on West End Lane.

Back in East London, Robert Hanbury was well known for supporting good causes. He had donated £100 of his own money to help establish the West End Laundry. But his wealth couldn’t protect against personal tragedy. In September 1863, two of Robert’s sons, Francis (11), and Herbert (7) contracted scarlet fever and died while on holiday in Eastbourne. Robert’s wife Caroline died just a week later. Press reports of her death give no cause of her death other than to say that it was not scarlet fever and that it followed what one paper called her “unwearying nursing” of her sons. Robert Hanbury married again and died in 1867, after suffering from rheumatic fever for several weeks. 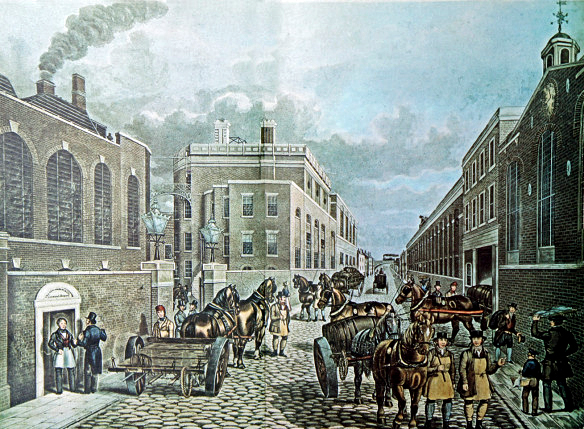 What have I missed since January 5th?