We found the rock god. Or rather we found the guy who worships at the altar of heavy metal.

Remember the article about very local census data a few days ago? It concluded by showing that it’s possible to narrow down single data points to just a couple of streets. One person in West Hampstead had said in the census that his religion was Heavy Metal. That person had to live in Woodchurch or Acol Road. And now – thanks to Siân Llewellyn on Twitter – we’ve found them. Meet Alexander Milas. 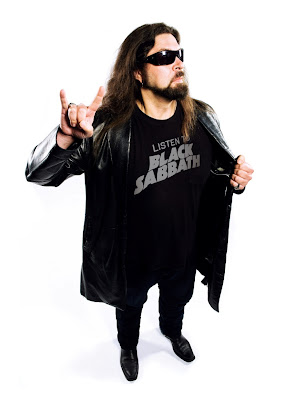 Alexander, who has since moved from Woodchurch Road, isn’t just a worshipper of Heavy Metal though. Oh no. He’s the editor of Metal Hammer magazine. Better still… Alexander, together with his friend Rick who owns the Crobar in Soho, actually came up with the whole campaign to get people to put Heavy Metal as their religion. In total, more than 6,000 people nationwide signed up to the church of Metal (more than claimed to be Scientologists, or Druids, or even Taoists) thanks also to the efforts of Saxon’s singer Biff Byford, who agreed to be the ambassador for this new religion. Byford set out the stall for why Metal was truly a religion to be embraced:

“It’s not like pop music, where if the next song isn’t good enough then forget about it; with our music, people will allow you to be shit sometimes, and that’s one of the great things.”

It’s actually surprising that there was only one Metal devotee on the census. “It’s only fair we mention that it was actually a metal household,” said Milas. “My flatmate Duncan Wilkinson is actually in a band called Collapse and also very, very noise like myself.”

Water out most of day, road closed until weekend? Shops to become Ballymore marketing suite