After several months of radio silence on the 187-199 West End Lane development, there is now an update on progress.

There had been a nice idea that the strip of shops from Café Bon to M.L.Estates might become pop-up shops while they lay empty (they will all close at the end of this month). Ballymore has other ideas and is applying to demolish them as soon as possible it seems and erect a temporary cedar and glass-clad “marketing suite” on the site for up to two years (i.e., until completion of the development).

There are new architects on the scheme. JTP, who designed the original scheme, has made way for WCEC, urban regeneration specialists. However, rumours that the developer Ballymore was no longer involved seem to be scotched by this latest planning application. Ballymore’s name is clearly on the submission along with WCEC. 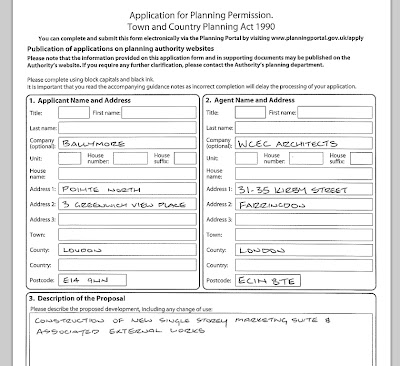 The application states that “The Marketing Suite is to be erected at the earliest opportunity and will remain for the duration of the works on the site. The building is to be removed after this time.”

Frankly, this is not the worst option. What I think everyone wanted to avoid was the shops sitting empty for an indefinite period. If they’re going to be replaced with something else, especially something which hides at least some of the construction site, then that seems reasonable.

There is a lack of clarity over timing, however. The shops have been told to vacate by the end of February. The planning application says the site has been vacant since the end of January, while the Design & Access statement talks about existing tenants vacating in April, “at which point demolition will commence.”

“The Marketing Suite is to be constructed from three temporary cabins fixed together to create a space that is 12m x 7m x 3.2m high totalling 84m². The cabins were originally used for the Olympics and are now being effectively recycled for this development.

In order to improve the aesthetics of the building the front elevation, facing West End Lane, will be fully glazed with a curtain walling system with the pressure plates removed to give a seamless façade, there will also be a 300 x 300mm ppc aluminium feature nosing around the glazing in black. The front section of the North Elevation will also be glazed with the black feature nosing. The remainder of three sides facing into the site, behind the hoarding, will be painted white as these will not be visible from outside the site.

To either side of the building there will be 2.4m high hoarding which will be clad in cedar timber with a 300mm black band to the top to match that of the Marketing Suite. The hoarding will have both the name of the development and the Ballymore logo on them.

The area in front of the Marketing Suite and hoarding will be hard landscaped with feature paving and will have various planters dotted around.” 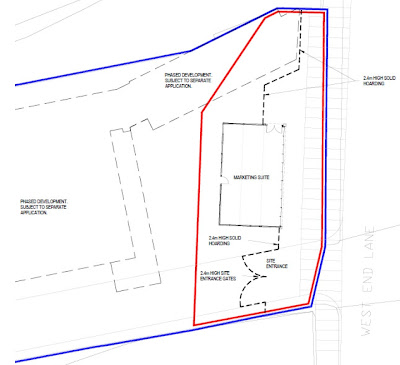 What’s happening to the shops
I have no news on Café Bon, Wired is likely to move out of the area temporarily but the owners are hopeful of returning once they can find premises. This was only ever meant to be a pop-up, but its success has encouraged them to establish something more permanent. Capital Car Hire will close, but has other offices in London. Peppercorns has a sign saying it plans to move further north on West End Lane, though it seems that it won’t be a seamless transition. AIT Computers is moving to a collect/delivery service based out of a house further south on West End Lane. Finally, M.L.Estates is moving to Mill Lane.