If the retail landscape hadn’t changed enough with the knocking down of the strip of shops opposite the post office, this week’s seen four units close on West End Lane. Before we all get too depressed, it’s worth noting that four places have also opened this week in West Hampstead.

Blue Daisy’s retrenchment to the safety of yummy mummyville in Hampstead has been mooted for some time. When it came time to renegotiate the lease on its West End Lane branch, it decided enough was enough. Has the arrival of JoJoMamanBebe up the road had anything to do with it? Seems like this town ain’t big enough for the two of them.

Talking of competition, the sushi explosion that’s occurred in West Hampstead over the past year or two was bound to do some damage somewhere. The venerable Sushi Gen didn’t last long once the sushi wars began, but Me Love Sushi is the latest to fall victim to sushi overload. It tweeted that it had sold up to the owners of Cafe Rouge although from correspondence with the Tragus Group, which is Cafe Rouge’s parent company and also owns previous incumbent Strada, we know that in fact it owned the site anyway and Me Love Sushi was a leaseholder. Tragus is now looking for a new leaseholder so it’s unlikely to be one of Tragus’s own brands. In the meantime, Me Love Sushi fans can still get their fix (or their delivery) from the Swiss Cottage branch.

Another saturated market around here is pizza, so it wasn’t a great surprise to hear that Picasso’s has shut up shop – with the bailiffs called in to the premises. Although reviews of the food had largely been good, it always seemed to be quiet and may have strugged to establish itself over perennial favourites Lupa, Sarracino and even Domino’s.

Finally, and more out-of-the-blue, was the closure of ShakeTastic. The tiny milkshake bar never seem rammed (and was never open early enough for a hangover-curing morning juice), and although the staff were always lovely I was never convinced it fitted in here. The poster that’s gone up in the window suggests it might return, but in the meantime the West Hampstead branch is relocating to Pinner(!). 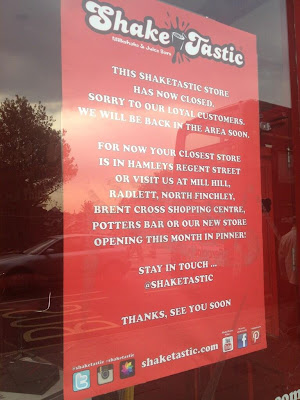 In more positive retail news, Minkies finally opened its tiny outlet by the Overground station to much acclaim. The well-liked Kensal Rise business had had us waiting for a year – the staff blamed TfL and Camden bureaucracy for much of the delay. Its position sets it on a collision course with Starbucks and Costa but with nowhere much for people to queue, I suspect it will maintain a very steady passing trade without setting the world on fire. It’s also well placed not just for commuters at the interchange but the two large estate agents opposite.

This very afternoon the sweet shop next to West End Lane cars re-opened too. Probably had to wait until ShakeTastic closed so as not to exceed the sugar quota for that stretch of road.

Away from West End Lane, there’s a new tea-shop on Mill lane called Curled Leaf that I’ve yet to get to and Spice Tree (which used to be Babur Empire) also opened on Mill Lane. Meanwhile, Tiger Stores – the Danish Muji if you can countenance such a thing – has opened in the O2. 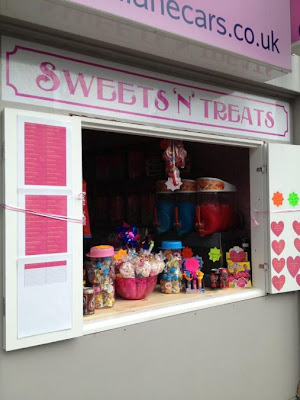 What does all this mean for the retail landscape? It seems that established businesses are generally faring ok – most of the recent closures have been of more recent arrivals (the business above, Pita, Chez Chantal), though of course there are exceptions (LoveFood, Walnut). It’s hard to get a foothold in the area I guess. Lena’s is one of the few newish businesses that’s really thrived – largely because it’s a unique offering for West Hampstead. A lesson there.

If you’re interested in learning more about the evolution of West Hampstead, then put the 21st May in your diaries. I’m holding an open forum aimed at the younger population for people to share their views on what they love and hate about the area and what they can do about it. There’ll be more details on this v.soon.

What have I missed since May 6th?