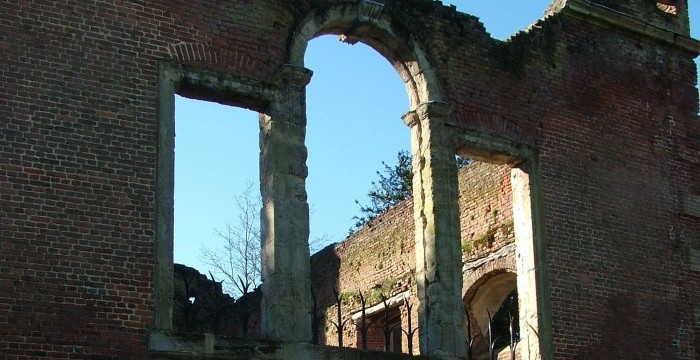 This short six-mile jaunt from Hertfordshire back into London takes in a sailing club, horses, a stunningly rich private street, the former headquarters of Fighter Command, a ruined church and – the undoubted highlight – the chance to walk alongside the M1. Stick with me people.

Elstree & Borehamwood, 14 minutes away, is as far north as an Oystercard will take you on the Thameslink, but – as one of the teenage girls who got off at the same time said to her friend – “it’s definitely not London.” 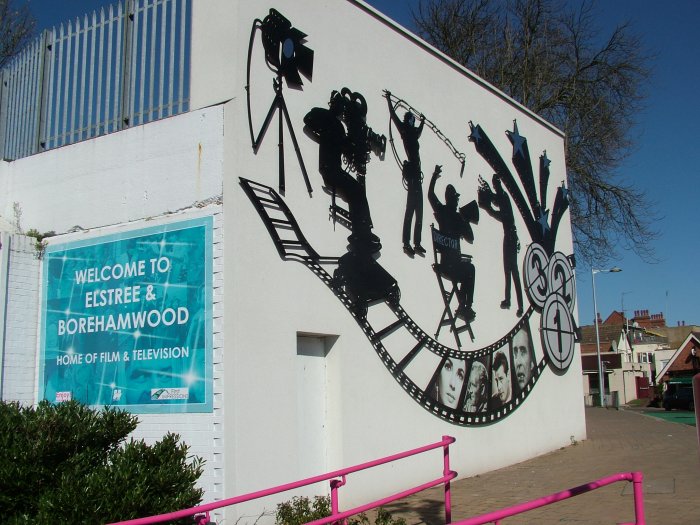 Elstree’s film heritage screams at you as soon as you step outside the station, but Allum Lane is hardly Hollywood Boulevard. It’s a bit of a climb up the hill through resolute suburbia until the views open up, fields replace well-tended gardens and the advertised Free Manure wafts into your nostrils. This is horse country, with liveries, stables and bridleways all the way to Stanmore, although we didn’t see anyone actually on horseback all afternoon.

It is possible to take a countryside detour that avoids some of Allum Lane, but it’s hard to get that excited about walking three sides of a square, when you can just zip down the road. To take the detour stick to the London Loop signs.

Regular readers will know that we’ve previously tackled sections of the Capital Ring, which is the inner circular loop. The London Loop is a similar, but longer route, on the very edge of the capital. It’s well signposted with the same small green singposts and waymarks. This walk takes in part of section 15 of the Loop.  And at the end of Allum Lane it takes you through a gate and across a field. Despite the strong spring sunshine, the faint path had plenty of give – a reminder of the wet winter from which we’ve just emerged.

Planes from nearby Elstree aerodrome buzzed overhead – pilots taking advantage of one of the nicest weekends for months. Down on Aldenham Reservoir, the sailing club was also buzzy although there was no-one actually on the water. 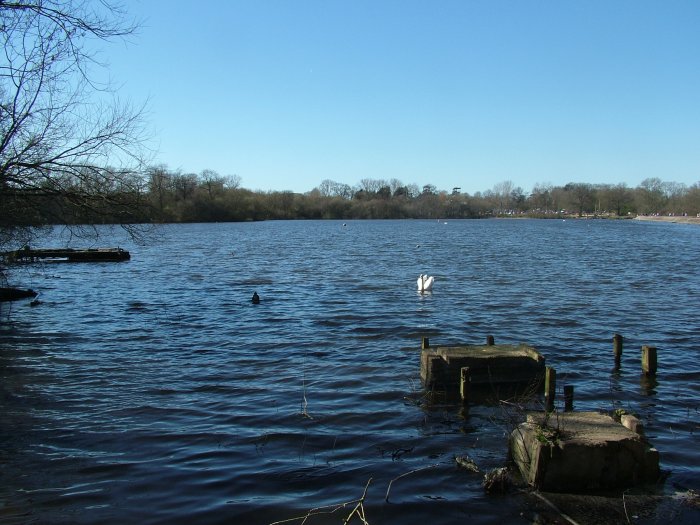 I’m not one for sailing myself, though I understand the appeal. As hobbies go, it does seem to involve a lot of lugging things around. Men plodded around in wetsuits carrying equipment to and from sheds, while a friendly chap asked if we were interested in joining the club. We weren’t, but it’s amazing how nice it is to feel that somewhere is inclusive not exclusive. 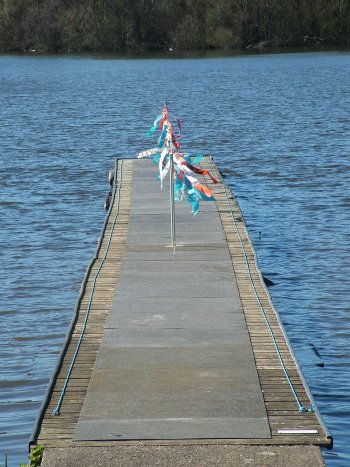 He told us about the strange tiny boats we could see. These are Illusion keelboats – the design is apparently the same as the original Americas Cup boats, but they are a fraction of the size. 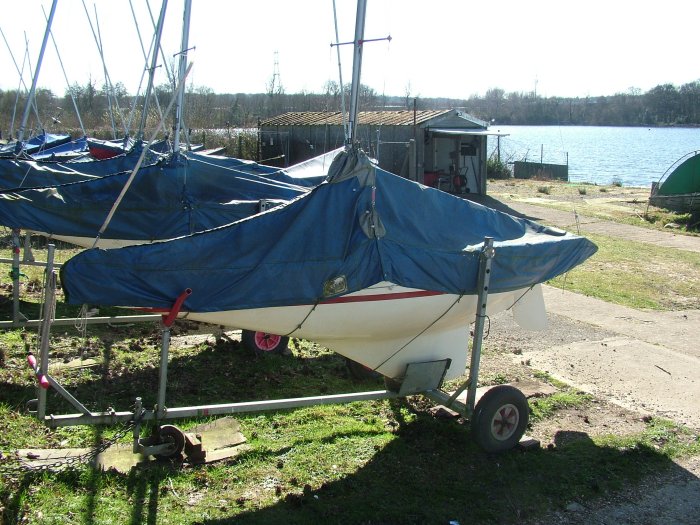 Aldenham has the second largest fleet of them in the country – they are more suitable for the “more mature sailors” apparently. Once you’re in, there’s not a lot to do other than steer and the lead in the keel makes then practically impossible to capsize. Here’s a photo of them in action.

A Great Crested Grebe bobbed by.

The path around the reservoir was busy with families out for a stroll. Wikipedia (infallible, as we know) tells us that the reservoir was hand dug by French prisoners of war between 1795 and 1797. You can easily circumnavigate the whole thing for a pleasant hour or so, but we pressed on. The London Loop rejoins the road, though you could continue to follow the reservoir path for another few hundred metres and cut back onto the road at a very unofficial break in the hedge.

The least enjoyable part of the walk links the resevoir to the junction with the M1. We saw the first sign to Bentley Priory, but this was a yellow “housing development” sign rather than a brown “heritage attraction” sign. A hint at the next chapter in the unusual history of this 18th century stately home. 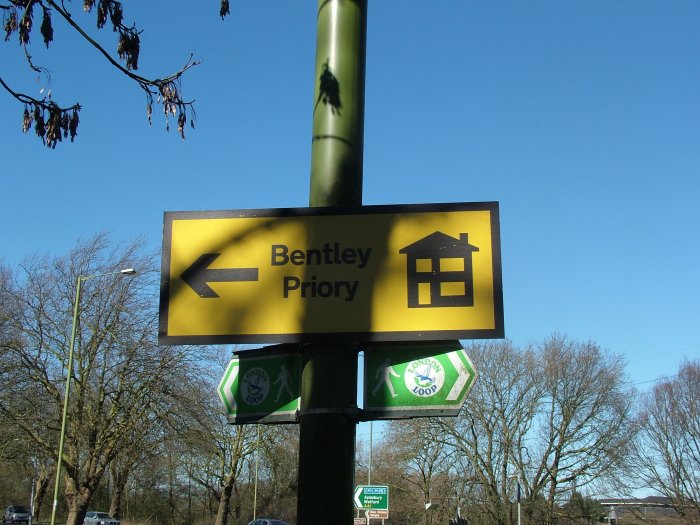 Ducking under the M1 the path immediately takes a left. It’s London Loop signposted but looks very unprepossessing with black plastic-covered hay bails suggesting there’s no access. At the far end of the field, with the hum of the motorway traffic receding, we came across more horses – one of which was particularly friendly though also seemed very keen on licking a fence post. 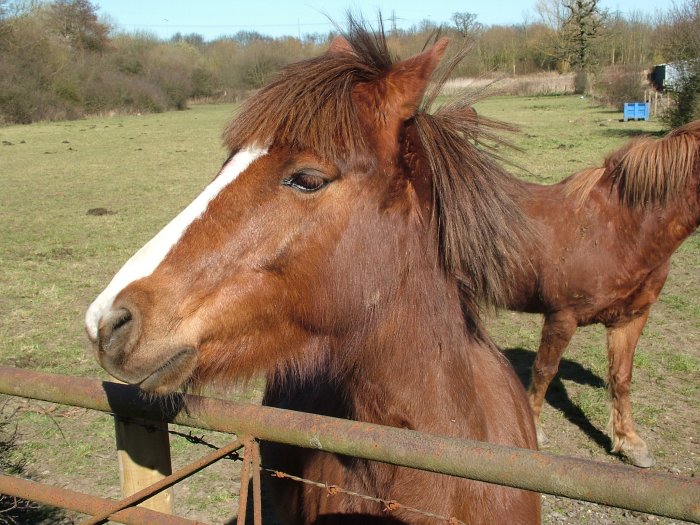 Up past more horses until we reached a junction. The footpath runs between the road and the fence, though it’s easy to miss and the road is not a public right of way. The path emerges at a back entrance to the Royal National Orthopaedic Hospital at what looks like the staff quarters and, rather oddly, there were a couple of horses (and people) on the grass inside the hospital grounds. 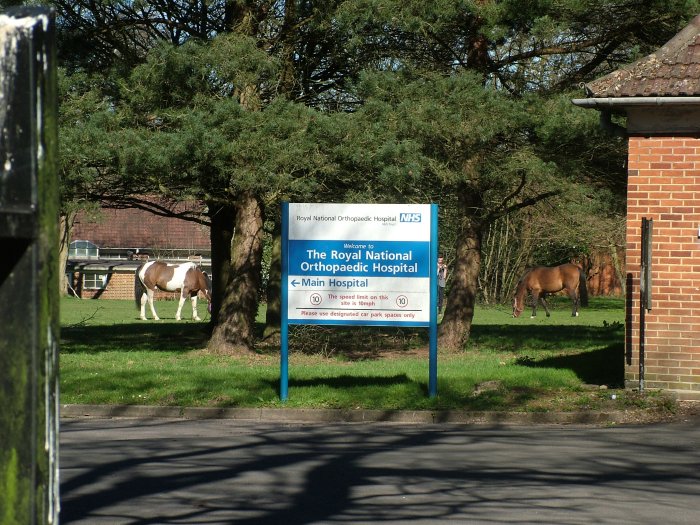 Back on the road again, albeit this time a leafy lane rather than a thunderous A-road. Warren Lane skirts Stanmore Common, which is actually a wood, and there’s a small detour through the wood that brings you out at the car park. This is also a spot on the Bentley Priory circular walk – a four-mile loop that would make a nice extension to this walk.

There’s a very clear footpath sign at the next junction but it points towards a large gate and some forbidding signs. Press on!

This is indeed the path and the side gate pushes open. This is Priory Drive, a small estate of some eye-wateringly large and expensive looking houses. According to the property websites they don’t change hands that often, and are worth less than you might imagine (a few million rather than many million). 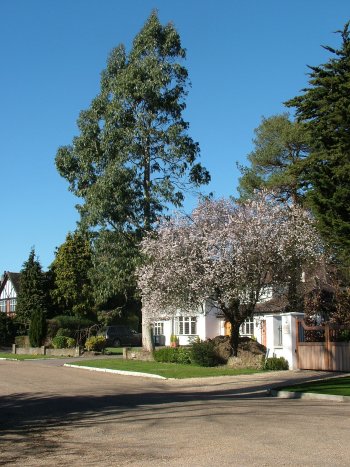 A large and unmissable signpost directs errant scruffs in walking boots out of this moneyed enclave and back onto the footpath, which leads to Bentley Priory Open Space and the first glimpse of the Priory itself.

Bentley Priory was founded in 1171 and 600 years later, Sir John Soane designed a new house north of the original priory. Queen Adelaide, widow of William IV, died there in 1849 and between then and 1926, the building operated as a hotel and then a girl’s school.

In 1926, the Ministry of Defence bought the land and 10 years later it became the headquarters of Fighter Command. This was where Air Chief Marshal Sir Hugh Dowding was based and thus from where the Battle of Britain was managed.

On D-Day, Winston Churchill, President Eisenhower and King George VI were all together, monitoring the landings from the underground bunker. 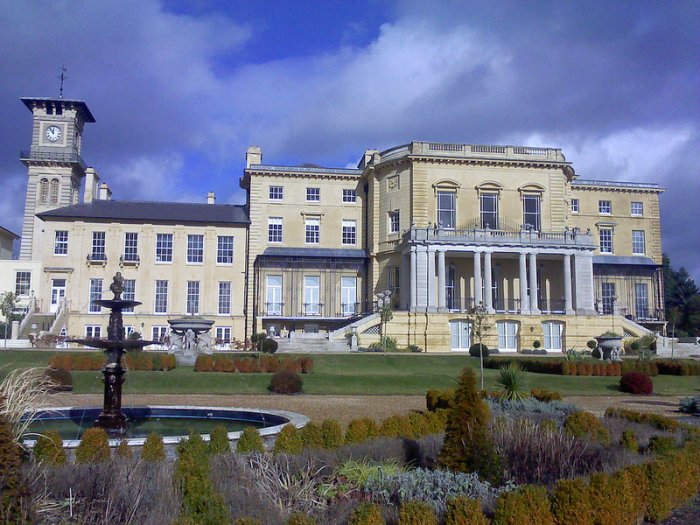 Bentley Priory in February, Photo with permission from Roy Cousins

It was also the home of the Observer Corps (later granted “Royal” status thanks to its work in the Battle of Britain), who were mostly civilians during the war, and were responsible for tracking aircraft once they had crossed the coast and into Britain. The Royal Observer Corps didn’t leave Bentley Priory until 1995 and the final units left the following year.

Eventually, the MoD sold the estate and the ensign was lowered for the final time on May 30th 2008.

The site is now being redeveloped as luxury homes and flats. Residences inside the original building home itself are being marketed by City and Country, while Barratt Homes is building new properties on site as well. However, the building’s military heritage is not being completely erased – after some protracted negotiations and a substantial donation from the developers, it was agreed that some of the rooms in the building could house the Bentley Priory Battle of Britain Trust museum. The museum opened last year though for guided tours only. It’s expected to open fully this year. For more photos, see Roy Cousins’ pictures.

On this walk, views of the building on this walk are obstructed by earthworks, but you can always follow the road round to the front entrance, or follow the signs (old and new) to skirt the estate for more glimpses. 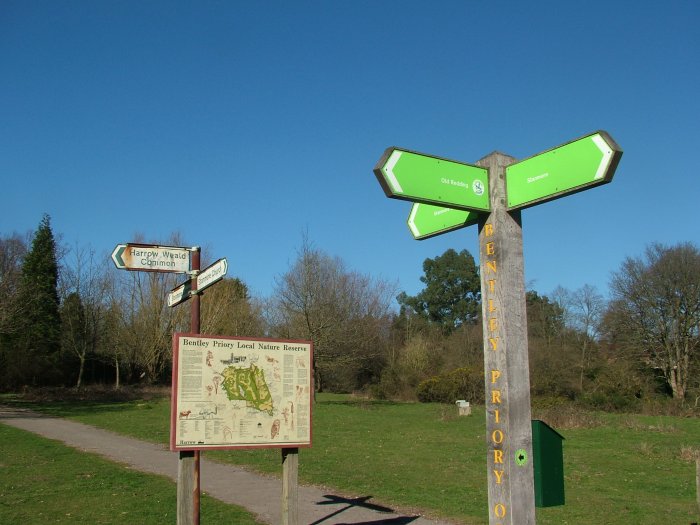 We headed down through Heriot’s Wood and a deer park that was keeping children entertained as they threw carrots at the animals (who definitely preferred carrots to turnips) and emerged onto some open land with a large pond. 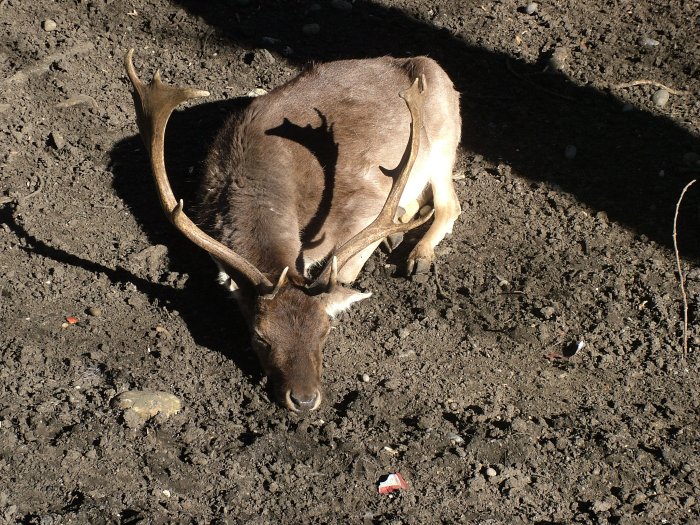 Minutes later and you’re in the built-up area of Stanmore. I knew next to nothing about Stanmore despite seeing the name every time I get the tube home. It turns out to be a fairly pleasant north-west London suburb with one remarkable feature – a ruined church in the grounds of another church.

The red brick ruin is the original St John the Evangelist church. It dates from 1632, but although it looks like it suffered bomb damage, its dereliction predates the blitz by almost a century. 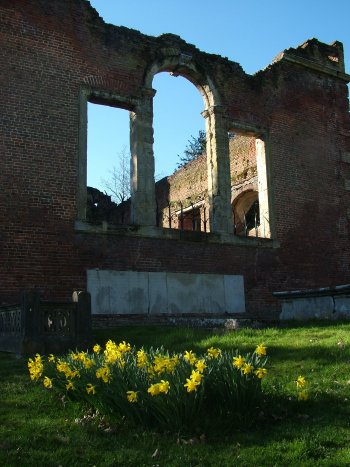 By 1850, it was deemed both too small and unsafe and the church next door – also St John the Evangelist – was consecrated. Permission was granted to demolish the old church, but a public outcry stopped this work after the roof and and part of the south wall had been taken down. The church was left as a ruin. In more recent times, work has been done to shore up the structure and make it safe. It is still consecrated and is occasionally used for services. 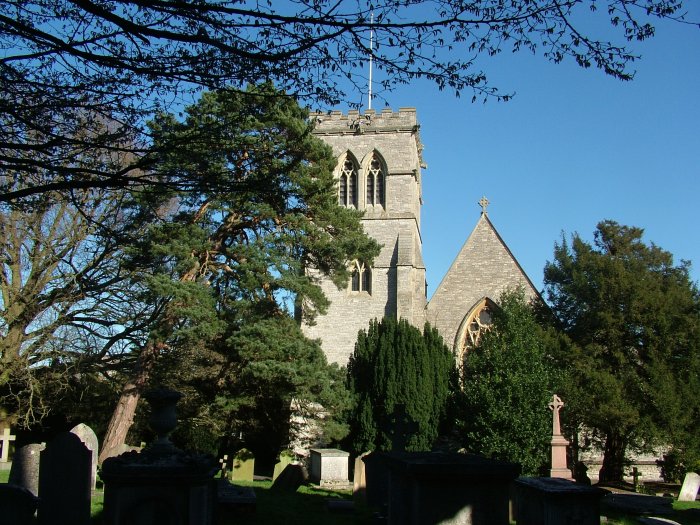 Architectural critic Nicholas Pevsner decreed the brick church to be one of the finest ruins inMiddlesex, which may not be saying much. It’s open Saturday afternoons from April to September.

Stanmore tube station is a little outside the main drag. It was opened in 1932 and looks like a nice house from the street. From here, it’s a 20 minute trip back to West Hampstead.

Factbox
Distance: 6 miles
What to take: there are no shops between Elstree & Borehamwood and Stanmore, so take any snacks and drinks you might want. Unless it’s been very wet, trainers that you don’t mind getting dirty would be fine.
Maps: OS Explorer 173 London North (1:25,000)
Terrain: very gently undulating, good paths and pavement with a couple of fields to cross
Signposting: the London Loop is well signposted, but I’d still take the maps
Travel cost: £2.50 train, £1.50 tube (off-peak Oystercard fares).
View Elstree & Borehamwood to Stanmore in a larger map