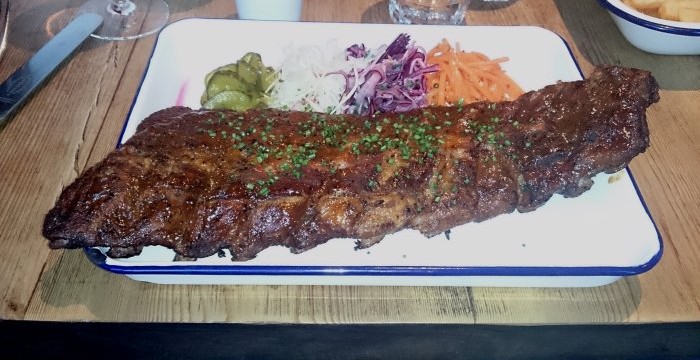 One Sixty is no longer the new kid on the West Hampstead restaurant scene since the arrival of Toomai. But has the novelty of the smokehouse concept worn off for locals yet, or is the quality of One Sixty’s food good enough to sustain it.

We decided that a few anecdotal meals wasn’t enough to judge – it was time to give it the full whampreview treatment, which meant unearthing at least a couple of local die-hard fans of this genre of food.

Lets clear one thing up right away. One Sixty does not really cater to vegetarians. There are vegetarian options (mac & cheese, for example), and they’ve expanded these since opening, but at One Sixty, the carnivore is king. You may feel this is an awful misjudgement, or you may feel that as long as people know in advance, then it’s up to them. We deliberately didn’t take any vegetarians along because why would you want to take them somewhere where there wasn’t much for them to eat. That’s just cruel.

The menu isn’t a straightforward starters/mains menu, though in reality the side orders function just fine as starters. The menu also changes a bit every time, though a few stalwarts are always there and the specials have been the same the past few times I’ve been. I’m a sucker for the chicken wings, which started off in the restaurant’s early days as juicy but fairly mild, but are now definitively hot. And good. A bowl of these and a pint of the new Meantime Brewery Fresh beer (the one that’s pumped through the amazing silver tanks installed at the entrance) would make a good lunch for anyone. We tackled the wings (£6.50) and crubeens (£6, a snack made from pig’s trotters – a little fatty for or some, but good flavour). 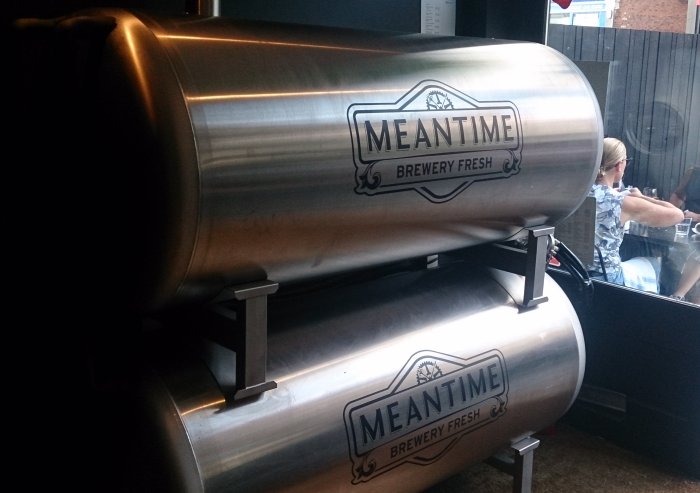 The Meantime tanks by the front door 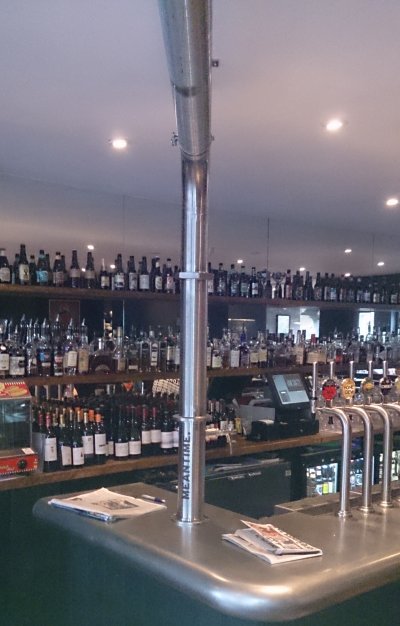 Beer can be piped “Brewery Fresh” to your glass 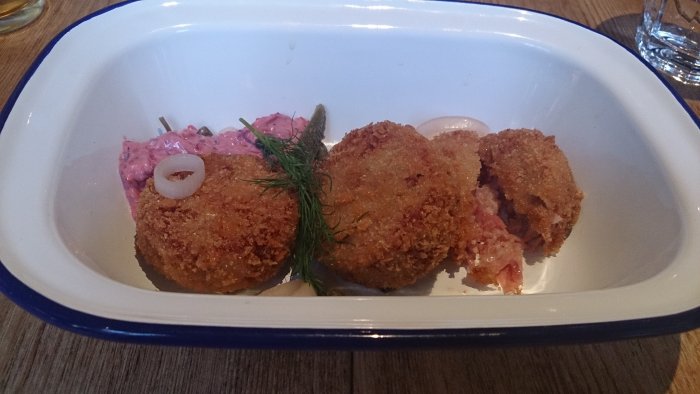 Mains are served in white enamel trays, which maybe looks a tad gimmicky but suits the low-brow smokehouse decor quite well, and is infinitely better than putting everything on chopping boards, especially given the sauces!

I had the full rack of pork ribs (£14), this time ordered with the sauce on the side to test how tender they were when served dry and what the rub was like on its own (the answer is “pretty tender”, and “maybe not as interesting as you’d hope”). With the sauce on, however, these become a sticky delicious treat. 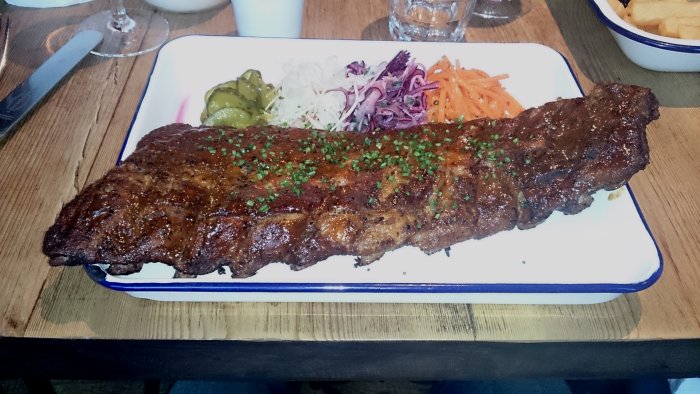 Full rack of pork ribs (sauce yet to be added!)

Dishes come with a side – the chips are pretty good, the pickles are outstanding – in fact between One Sixty and Chicken Schnitzel & More, West Hampstead may just be the pickles capital of London. With all the meat available, you’re unlikely to go hungry unless you have a voracious appetite (or perhaps the burger, which as you’ll see below couldn’t satisfy Tom).

The tarte tatin is apparently for two. I conclusively and single-handedly proved that this must be a mistake on the menu.

It’s worth mentioning the drinks – the bar at One Sixty (where you can also eat the full menu if you wish, though there is a separate smaller bar menu), has an impressively extensive range of craft beer. So extensive in fact, that you wonder whether they have the turnover of some of the more obscure beers to keep them reasonably fresh. There’s also plenty on tap – more from London brewers Meantime, Fullers and Camden Brewery as well as one or two more exotic options such as Sierra Nevada.

The wine list isn’t particularly long and pricewise could probably benefit from one or two more wines at the lower end. It’s a shame there’s not slightly more wine, because actually the rich, complex, smoky flavours of this slow-cooked meat (One Sixty refers to the Fahrenheit temperature all the meat is cooked at) match with many robust red wines very well. We went for a Malbec (£22) that worked well, but a few south-west France wines would also hold their own and might be better value.

Wiping our hands from the enormous roll of kitchen paper plonked on every table, the consensus was that One Sixty delivers memorable, if not always perfect, food. I think it’s an excellent addition to the neighbourhood and it deserves to do well.

In whampreview tradition, I’ll hand you over to the others to give you their verdicts

Will
Barbecue is always local for its partisans, many of whom pride themselves on being “downmarket” – all about the familiar, as in family, tribe and region. That, and taking your time. Smoking and slow cooking can’t be hurried, so its’ provincial culinary traditions steep and thicken. The chefs stare into the pit, ruminate on burnt tips, smoke and fire. It’s elemental; don’t overthink it.

So, when I read that the owners of Pied a Terre had decided to open a ‘smokehouse’ in West Hampstead, I sniffed, “What will this pricey Bloomsbury haute cuisine landmark dish up on West End Lane? Will it be Barbecoa without the view?“ But the basics at One Sixty bode well. There’s no hush puppies, cornbread or baked beans, but their red cabbage slaw is top notch, and the hot chicken wings are better every time I try them.

The darkened interior keeps your attention on the fare, and these are not expensive morsels plated on oversized porcelain and set against crisp white tablecloths. Pound for pound, the price points please, with ample portions served on the wooden tables, dining in the rear, and some tables on the street in these blissful long summer evenings. One Sixty has doubled up on its smokers as well, as demand has risen. If they stay the course and double down on their high volume/medium price strategy, everybody wins. Chef Andrei Lesment’s menu triangulates between the Carolinas (a succulent pulled pork sandwich), Texas (beef ribs) and some comfort food from here, the isle of the Angus and the Durham Ox. The ox cheeks at One Sixty are their specialty, served up like a brisket, flaking on the fork, a generous portion of tender meaty fibre. 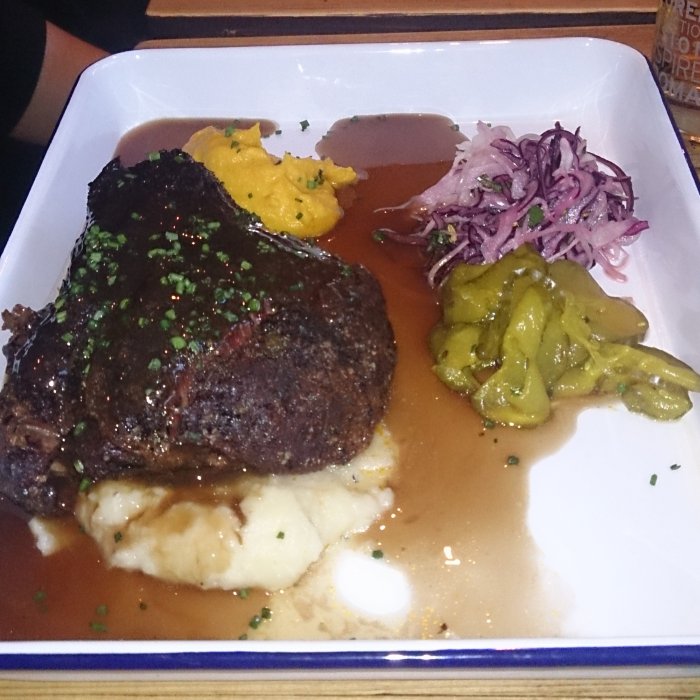 Ox cheek on mash with gravy and pickles

Many of the dishes come served with solid no-nonsense mash, that British Sunday staple, and Paris, Texas doesn’t do puddings like One Sixty’s spongey, elegant profiteroles. One Sixty gets high marks for being itself, and knowing its customers.

Tom
First thing to say, delightful Malbec – would definitely have that one again. The cheaper of the two on the wine list, and available by the glass, this was soft and supple, with sweet notes of chocolate (my dullard taste buds) or caramel (Nicky’s more subtle ones)

I opted for the burger, and although the bun had gone soggy underneath, the patty itself tasted good. Perhaps a little small though, to be honest. A nice touch was the refreshing, simple slaw with fennel seeds, and a light vinaigrette. Definitely a sensible match for all the richness of the main meals.

Chips were of an enticing, golden colour, and although not especially crispy, were nicely done, though for me personally I didn’t take to whatever they’d been cooked in. This is probably just me; the most adventurous I get with such things is goose-fat roasters at Christmas. I’m a bit traditional with potatoes, me; fry them in olive oil or butter, and I’m happy.

Service was excellent and there’s a really great atmosphere there. Good fun!

Claire
Feeling woefully inadequate sitting next to the Barbeque-ipedia that is Will, I chose Pulled Pork for my main, so I didn’t have to comment in the ribs/rubs debate! I swapped the chips for the great slaw – no mayo and with the zingy addition of fennel seeds. The pork was moist and I liked the fresh red cabbage topping. I’d have been happy with a few more crunchy bits of pork and a well toasted brioche bun, as it was a little soggy, but it was a well executed dish and I didn’t suffer from food envy! For dessert, just order the drunken banoffee, you will find room for it! 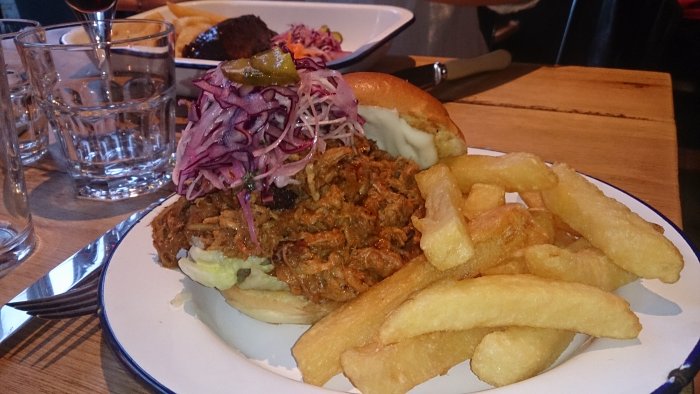 Pulled pork in a bun

Nicky
I have to admit that a hearty, industrial-style smokehouse restaurant isn’t my natural habitat. Although no longer vegetarian, I’m usually happier tucking into a tofu steak than a ribeye; and a colourful lentil salad is more likely to get my pulse (ha!) racing than a plate of sticky pork ribs.

However, I really enjoyed our evening at One Sixty. Yes, the menu is unashamedly focused on flesh, and you’d need to be in a carnivorous mood to fully enjoy a visit here, but unlike in the macho “dirty rib” joints beloved of certain sections of the food blogosphere, these dishes feel high-quality and well thought out. 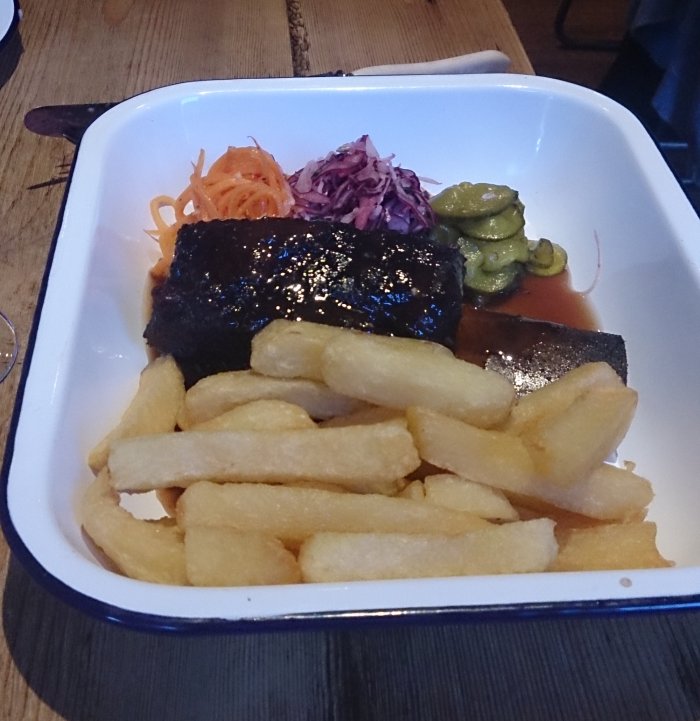 As you’d expect, a delicious smoky aroma pervades the meat which forms the centrepiece of each dish, but the accompaniments were a welcome surprise – really crisp, fresh-tasting pickles and slaw cut through the richness of the barbeque flavours of my beef shortrib.

The atmosphere is smokin’ too. The huge craft beer selection draws in a lively crowd to the bar at the front, and there’s a chatty and convivial vibe in the dining room too. I’ll definitely be back to this great new West Hampstead hangout.

Property of the Month: August

Robin Williams’ impromptu gig at The Railway in West Hampstead