The London Diocesan Board for Schools has taken over the old St Mary’s School in West End Lane to use as its training centre. Over the years St Mary’s School has occupied four different buildings, all within a short walk of each other. 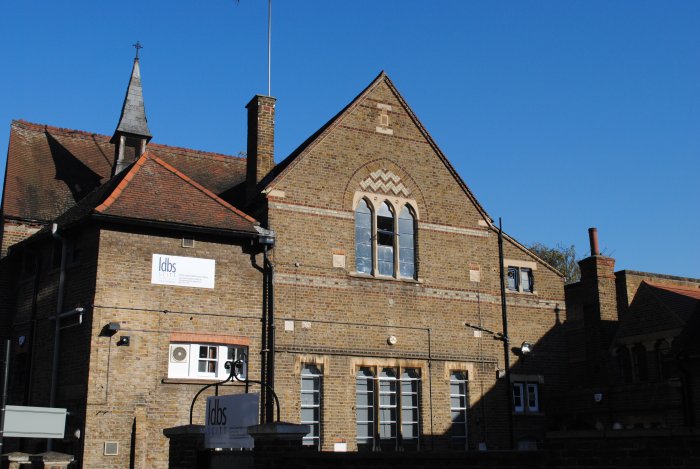 Until the mid 1870s all new churches provided their own day school. The foundation stone for St Mary’s Church in Abbey Road was laid in 1856 in the midst of open fields. When the main building opened in 1862, the neighbouring streets were still being built. Once the money was raised, the church tower and spire were added ten years later.

The site of the school in 1866 marked in red

Scenery painter Charles Marshall lived at 1 Upton Road from at least 1853 to 1855. He was employed by several theatres, including Drury Lane and Her Majesty’s. He originated and developed transformational scenes and is credited with introducing limelight on the stage. Marshall also exhibited his paintings at the Royal Academy. His studio was the space referred to in the 1859 sales particulars for the property, when specific mention was made of a ‘large school room or studio’ adjoining the house. This was the space occupied by the first St Mary’s School until Spring 1868.

In 1869, £510 was paid for the freehold of an existing ‘incommodious’ school that served St Paul’s Chapel in Kilburn Square. The school stood at the Kilburn end of West End Lane. The old building was demolished and the second St Mary’s School was built on its site by Manley and Rogers, at a cost of £1,648. Until it opened in 1870, pupils were taught in rented rooms in Priory Mews. When the school opened the school mistress originally lived on site: in 1871 it was 24 year old Emma Watson, when the school roll was 162 boys, 70 girls and 80 infants.

Over the years the buildings were extended and improved but the site was very restrictive and finally a new school was opened at the corner of Quex Road and West End Lane in November 1991. Costing £1.75 million, the school was designed by Professor Hans Haenlein and was one of the most modern in the country. The hall is in a central covered courtyard with a slide back roof, the classrooms opening off the hall on three sides. Ex-pupils of the old school include the actor Peter Egan and Fred Housego, the taxi driver, who won Mastermind.

The old building at 2 West End Lane was taken over by ‘Teddies Nursery’ in 2004 for about 100 children. This was one of a chain of nurseries run by BUPA. In 2014 the London Diocesan Board for Schools (LDBS SCITT), took the building to train teachers. It works with more than 70 Church of England schools in London to provide school-based training for students.