Thameslink services will not run between St Pancras and Farringdon Monday due to the flooding. Here’s a train going through the standing water.

Camden released its viability report on the controversial Liddell Road development. The NDF chairman called it “an insult to the local community“. There’s yet another (though probably final) chance to discuss the Liddell Road scheme with Camden officers 11am-1.30pm at Sidings Community Centre on Tuesday 27th.

A rather macabre incident on Hemstal Road involved criminal damge to a car involving a pig’s trotter and some hearts. The police are appealing for witnesses but do not suspect a religious motivation at the moment. 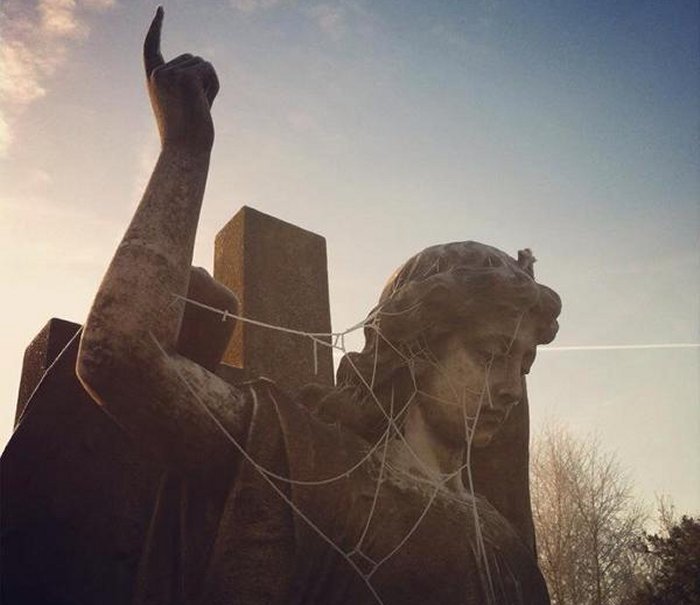 Frozen Angel at Hampstead Cemetery this morning via Natasha Back

The Alliance is raising money to repatriate the body of staffmember Natalia Czekaj to Poland after she was found dead earlier this month at her home.

The West Hampstead Life Forum launched. Sign up, join in the conversation and start your own discussions. If you’re not sure how to start, here’s a how-to guide to get you going.

All five main parties have now announced their election candidates; we take a look at the candidates and the latest thinking on the outcome. Put March 31st in your diaries for the West Hampstead Life hustings in association with the Sherriff Centre.

The Benham & Reeves property of the month is a 1-bed in West Hampstead Square that’s come back on the market.

There will be no farmers’ market this coming Saturday Jan 31st due to major engineering works that mean southbound Thameslink trains will be terminating at West Hampstead.

The Culture Hub pick of the week is Aisling Bea’s stand-up at the Good Ship this Monday. See our other top culture choices this week.

We reviewed Sonia Jalaly’s one-woman show at the Tricycle Theatre.

Clothing shop Social is up for sale, with a sign outside the shop saying it’s moving to a new location (though not where that location is!).

Geoffery Lederman, the driver convicted of causing the death of Desreen Brooks, is appealing his sentence (18 months custodial and lifetime driving ban).

Little @waitrose in @WHampstead rubbing salt in the wounds of @PizzaExpress #redundant pic.twitter.com/gvzwl5DGaL