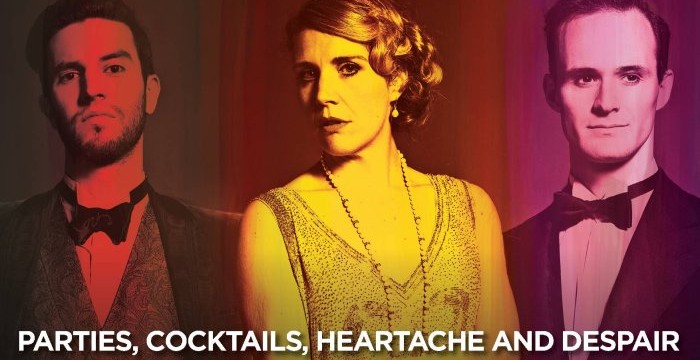 As a total opera novice, I was not sure what to expect when I sat down in the Tricycle’s auditorium for two hours of Verdi. Would I be able to suspend my disbelief and go along with all the characters singing at each other? Will the operatic performances just be too big for the tricycle’s small theatre? Will I even understand any of it?!

I needn’t have worried. OperaUpClose have spent the last six years developing opera performance for small spaces, having started with La Boheme in the now sadly defunct Cock Tavern Theatre on Kilburn High Road. Their work is designed to be accessible to everyone, and for an intimate ‘up close’ performance. They have even managed to bag themselves an Olivier Award for their efforts.

This production of La Traviata has been around for a while, but has been revived for a short run at the Tricycle. Artistic Director Robin Norton-Hale has translated Verdi’s original into an English version, so there’s no need to worry about not speaking Italian, and the score has been edited, zipping along at a pacy 2 hours 15 minutes, including interval. Yes, I was in the pub by 9.30! 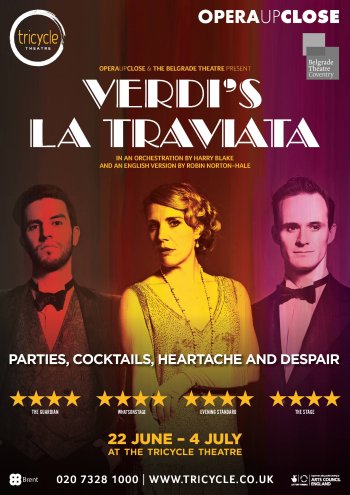 The story, which will be familiar to many, focuses on lovers Violetta and Alfredo, and their doomed relationship. This version is set in 1920s America, and the set and costumes are really stylish, with the entire cast permanently dressed to the nines – Violetta manages to look glamorous even when wearing pyjamas! We are instantly drawn into this world of parties, dancing and champagne, but even at the opening it is clear to see there is a darker side to all the frivolity.

The set looks great, a lovely touch is the subtle backdrop of a proscenium arch and curtain, behind the set, serving as a reminder that this is, after all, theatre. There are a couple of slightly clunky set dressing moments, which are carried by the musicians and it is a shame that they end up tucked away in the corner of the action, barely visible. The trio keep the piece moving along nicely, adding backbone to the muscular vocals on display, and are given the occasional moment to shine, but this production is all about the voices.

As Violetta, Louisa Tee steals the show. Her vocal dexterity is mesmerising, and she carries herself so well, exuding charm and vivacity, it’s easy to see why Alfredo is so enamoured of her. Robin Bailey’s Alfredo has a less-polished delivery, but the raw edge to his voice really worked for the character and I felt the hair on the back of my neck stand up whenever he sang. In a good way. During the run, four of the five cast members are on rotation, with three singers alternating for each of them. I don’t know if this is a regular practice in opera, but I can certainly see the need to protect the performers’ voices, as they are absolutely giving their all.

The English translation worked for me, because I am only a little familiar with the Italian original, but I can imagine that purists would find it jarring. There were a few moments where the singers seemed to struggle with the phrasing, trying to fit the English words into a rhythm created for Italian, and I couldn’t help but feel that some of the beauty of the arias was, literally, lost in translation.

These moments were, for me at least, few and far between, and I had no trouble losing myself in the story and getting caught up in the emotion. Within a few minutes I had ceased to be aware that the cast were singing in this elaborate manner and I was transfixed. The drama is high, with little room for subtlety, but this is opera, after all, and a thoroughly enjoyable night at the theatre. I’m not ashamed to say I left the auditorium with a tear in my eye, and I will be going back for more.

La Traviata runs at the Tricycle Theatre until 4 July. Catch it while you can!

What have I missed since June 15th?

What have I missed since June 22nd?