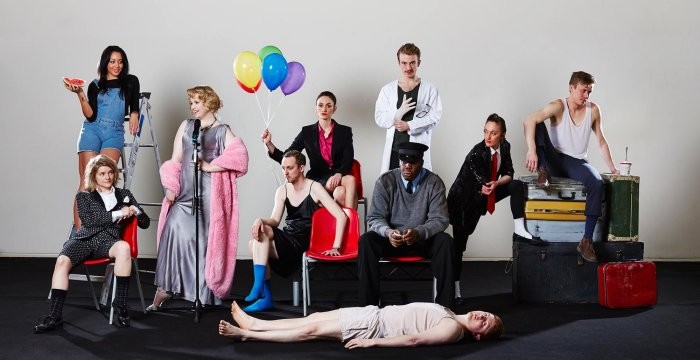 Eight actors hang out on stage, warming up in their gym gear, chatting to the audience a little, as if waiting for a rehearsal to begin. The show has quietly started as we walk in, but gets going when one of the performers’ names is picked out of a hat by a member of the audience and they become the focus of the action. What follows is a series of vignettes; snapshots of a life lived so far, tales of love and loss, interspersed with lots of physical challenges and silliness. 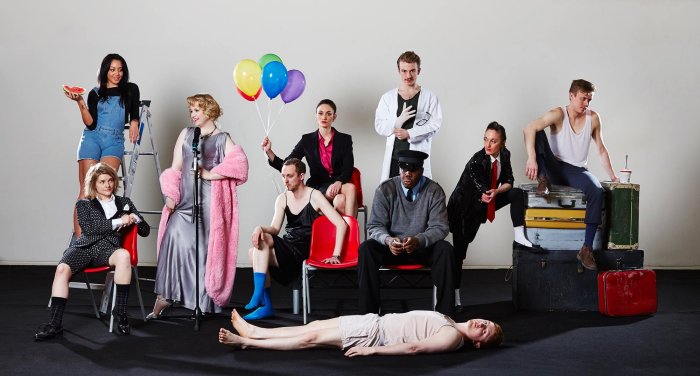 Our protagonist for the evening is Stevie (Steven Webb), who brings the audience into the action enough to make you feel involved, but not so much that you’re terrified you’ll be picked on for a bit of participation! His energetic, physical commitment to the performance is staggering and I found myself trying to catch my breath, after watching him writhe around the stage with gusto for an hour and a bit.

The cast are clearly having fun, and you can’t help warming to them and their antics, about which I will say as little as possible. For all its big energy, there are also several smaller, beautifully observed moments, which add depth and poignancy and raise the show to another level. Though admittedly there is something profoundly enjoyable about watching two people wrestle in a bid to remove each other’s shoes.

Inevitably, with an ensemble piece like this, you don’t get to see as much of some of the performers as you do others, and my guess is this varies depending on who is pulled out of the hat each night. It seemed a shame that not everyone was equally involved and I would have liked to see a few more scenes with the whole cast taking part. One stand out performance was that of Hammad Animashaun, whose deadpan comic delivery was perfectly judged.

For the most part the bare-chested honesty of the piece works but it’s not without its flaws. A couple of times the action feels self-consciously ‘edgy’ and wanders into cliché territory. One scene using very well known Shakespearian dialogue is, in my opinion, a misstep, and breaks the pacy, frenetic feel of the show.

With its stripped back set and simplistic lighting, the show often feels like a well polished student production, which some might see as a negative, but actually it’s the raw youthful energy of the performers, with their well-developed improvisational skills, that keeps the show fresh and engaging. It’s the sort of show that could work in all sorts of spaces, and at times I wanted them to burst forth from the proscenium arch and take over the whole auditorium. I felt they wanted that, too.

This young theatre company is definitely one to watch. This is exactly the sort of show that is perfect for the Edinburgh Fringe, where it ran to critical acclaim. I hope it can find the right audience in NW6, one that will embrace the non-narrative structure, admire the honesty and openness of the performances, go along for the energetic ride and be ready to laugh. A lot.

Win a pair of tickets to the show!

Win a pair of tickets to The Tricycle Theatre’s new show!

What have I missed since January 12th