A woman was sexually assaulted on Billy Fury Way. A suspect has been apprehended but the path feels unsafe and questions are being raised about what could be done.

As it happens plans for 317 Finchley Road – which included a ten-storey tower, yes ten storeys – proposed adding a new entrance to the path but large stretches will still be unsafe.

Parts of the Black Path, are also very overgrown and feel unsafe, but who is responsible?

Just up the railway line, Cricklewood station, is up for an award for the improvements undertaken by local volunteers. 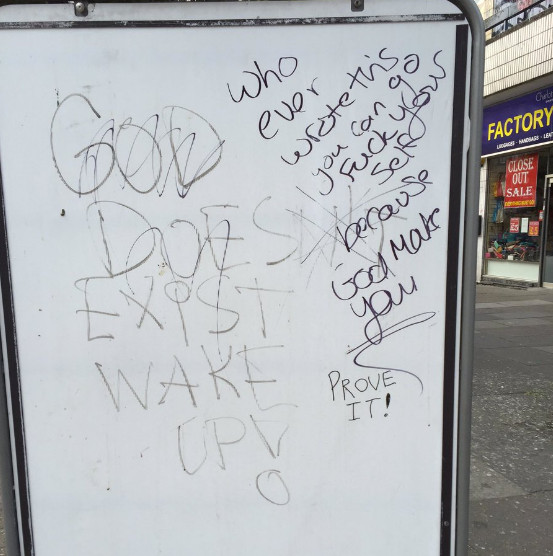 Some serious existential debate going on on the Kilburn High Road. Image via @YouMustBeAnna

It’s been a long running story but West Hampstead Mum Nazarin Zaghari-Ratcliffe has been tried in Tehran although we still don’t know exactly what for or the outcome. There is a heartfelt blog from her husband Richard here (read to the bottom).

Tulip Siddiq is ‘leaning towards’ Owen Smith, she announced during an interview on the World at One last week. You can hear the interview here – (the BBC could perhaps have chosen a more flattering  photo).

Maybe Jeremy Corbyn’s visit to a rally in Kilburn on Sunday evening can persuade her otherwise. Mention of Sadiq Khan elicited boos from the audience following his endorsement of Owen Smith.

No Deliveroo last week as delivery drivers went on strike at their new contract. They held a protest rally of about 50 scooters heading down West End Lane.

The Ham & High property section took a look at West Hampstead and decided ‘that fiercely loyal residents of NW6 love this residential area”, but you already knew that.

West Hampstead had a power station – who knew? Find out more in our next local history story.

A successful Whampgather at the Czech House. Na zdravi!

A new mural is appearing at the Mill Lane Open Space and if you want to buy some very local food it is selling veg it has grown this year on Thursday to pay for seeds for next year.

New comedy series Fleabag has migrated from BBC3 to BBC2, Sunday nights at 10pm (just as this newsletter is sent). There are glimpses of West Hampstead in it, but it’s funny so worth watch for more than that (just perhaps not with your mum in the same room).

Kilburn Cosmos rugby club is hosting a fundraising day on 3rd September after a burglar broke into the the clubhouse and stole thousands of pounds raised for new sports equipment.

It’s taken a while, but the natural fit between West Hampstead and literary festivals is happening. The Hampstead and Highgate Literary Festival is coming JW3.

And if you can’t wait until then to exercise your mind, JW3 is hosting a mind sports Olympiad from 21st to 29th August.

#WestHampstead oozes class:Customer 'D'you have new biog of #EdwardHeath? Fellow tried to sue me for libel & I want to see if it's in there'